Infinix released two new smartphones for the Philippines in July. One of them features a 5.7-inch display, MediaTek MT6753 octa-core CPU, 3GB RAM, Android Nougat, and a large 4,300mAh battery – the Infinix Note 4. Aimed at users who are looking for a device with a large display and battery, and a budget not exceeding Php9K. With plenty of smartphones in the market under that price range, how does the Infinix Note 4 stack up? Find out in our review. 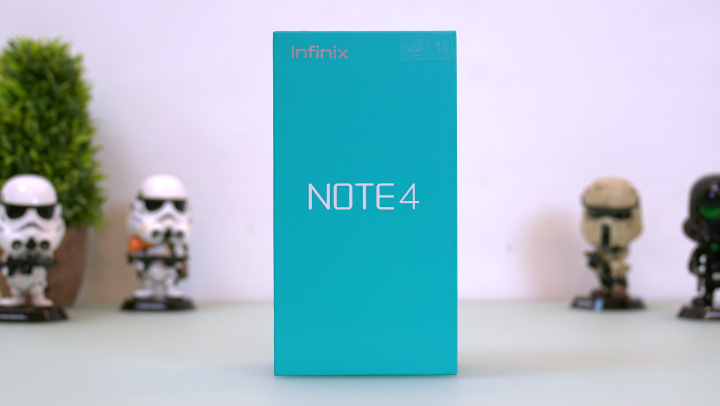 The Note 4, as the name suggests, is basically a phablet thanks to its 5.7-inch screen with Full HD resolution or equal to 386ppi. Placed above it is the receiver, sensor, and the 8MP front camera. Protecting those is a scratch-resistant 2.5D curved glass. 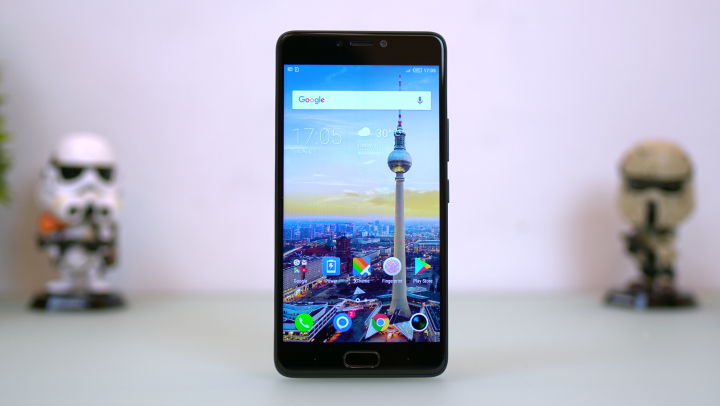 Down below are the physical home button that doubles as a fingerprint scanner. Located on its left and right sides are capacitive keys for navigation. These are unlit and with no visible indication to immediately find out which one is for Recent Apps (Left) and Back (Right). This can be confusing for first-time users but can get used to it over time. 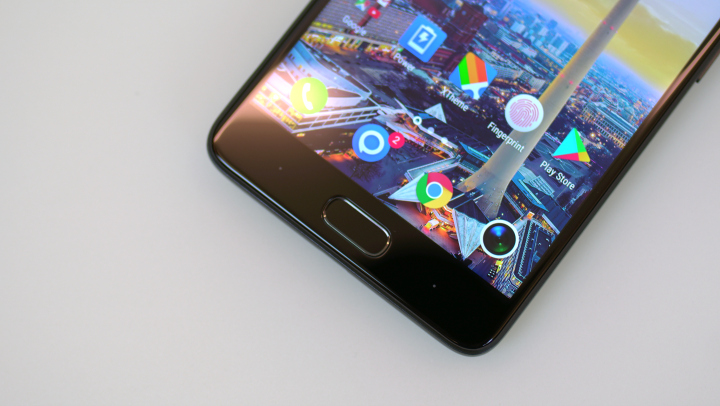 On the right are the power and volume buttons which are placed near the middle for easy reach. Although we find the power button to be too soft or shallow that the lightest grip would click it. 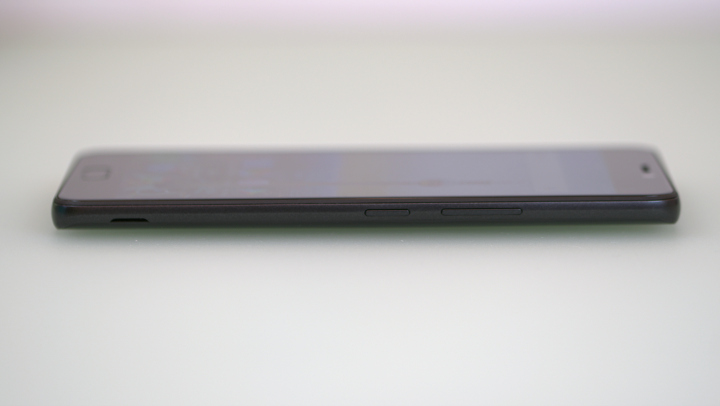 Found on top of the device is the 3.5mm audio port, while down at the bottom is the microUSB port, and two sets of holes for the microphone and loudspeaker. 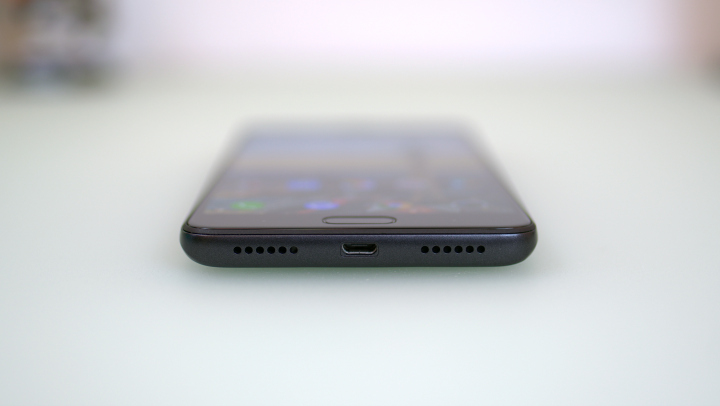 Flip it on its back and you will see the 13MP main shooter, dual-tone LED flash and the Infinix branding. The glossy cover, although looking like glass, is made of plastic and is removable to give you access to the micro SIM slots and microSD card slot. 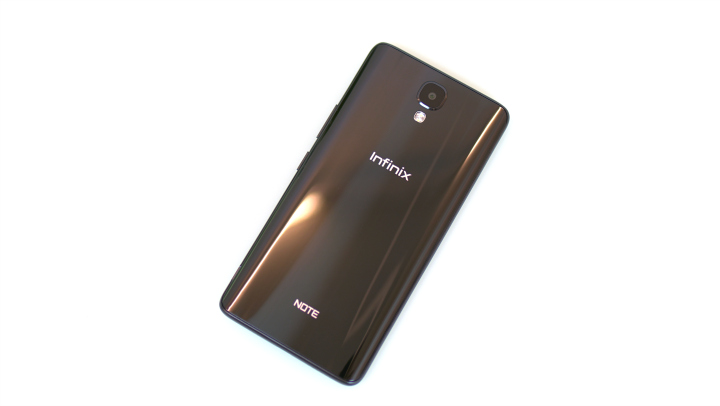 When it comes to its construction, the Note 4 looks premium although it’s mostly made of plastic. It also feels solid and doesn’t exhibit any creakiness. The back has curved sides for easy grip and has a glossy finish, which is also a smudge and dust magnet, to match the glass on the front.

The display is one of the highlights of the Note 4. At 5.7 inches, it’s good for those who are looking for a large-screened device without having to resort to a tablet. The 386ppi pixel density is good enough for viewing photos, watching videos, or playing games. In addition, it has good viewing angles, accurate colors, and good outdoor legibility. 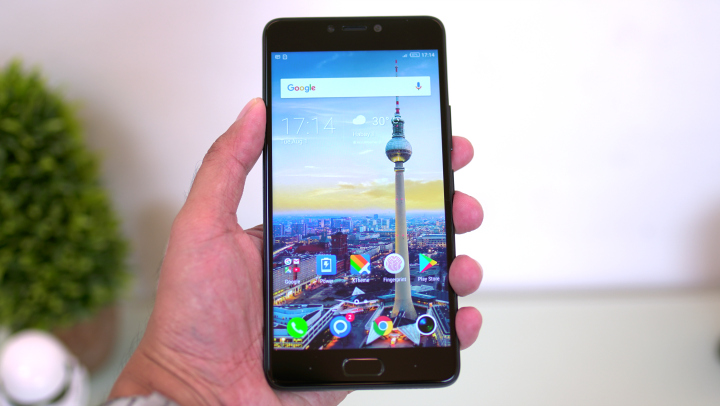 Audio quality from the down-firing speaker leaves a lot to be desired. It’s crisp which is good enough for hands-free voice calls but too trebly for music playback. That said, if you want to play some of your tunes on it, better use an external speaker or your favorite headphones.

Software-wise, the Note 4 is running XOS Chameleon v2.3 which is based on Android 7.0 Nougat. We’ve had it for just a month and it already received two software updates for bug fixes and improvements. At the time of writing, it already features the August 2017 Android security patch level. We hope that Infinix continues this frequent software patches and improvements. 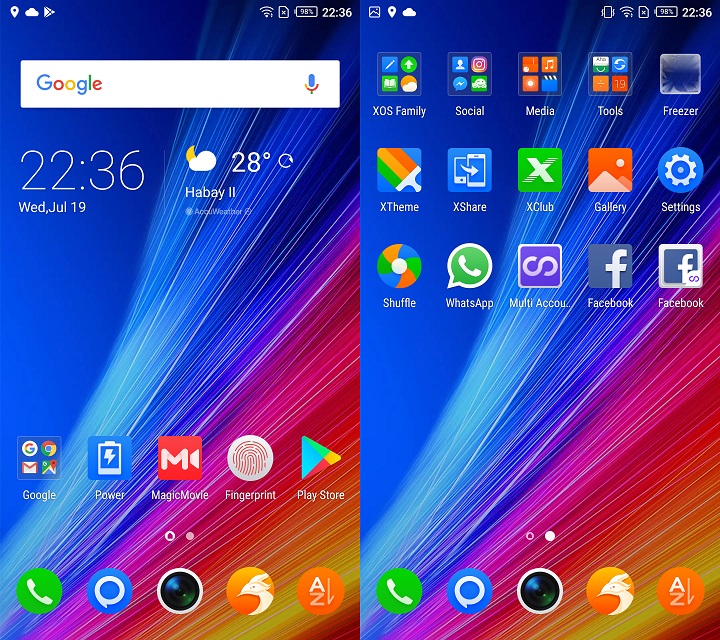 The user interface is similar to the previous Infinix devices. It uses multiple home screens to house its apps but you can swipe up from the bottom to list the same apps in alphabetical order, which is, again, feels redundant. We’re not fond of the icons, but like with most Androids, you can simply remedy that by downloading your favorite launcher in the Play Store. 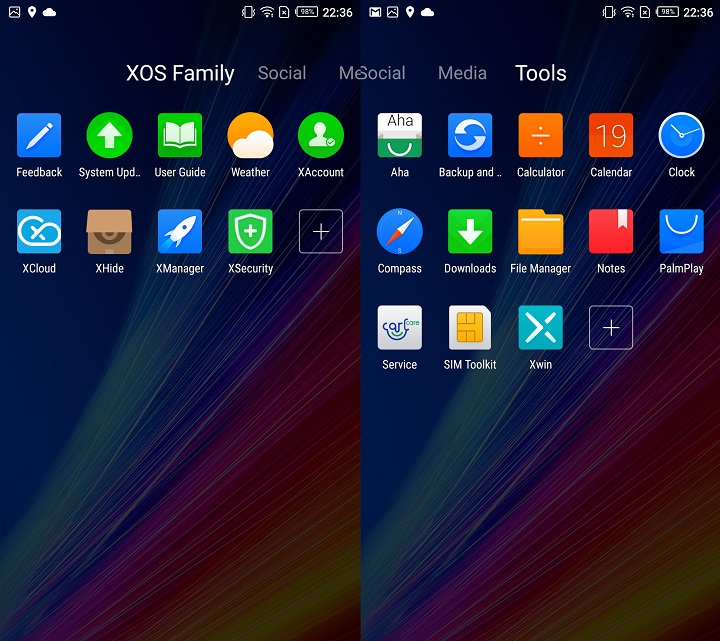 Third-party pre-installed apps are kept to a minimum – Facebook and WhatsApp. Most of them are Infinix’s own apps that can be uninstalled and some from Google. There’s this app though called MagicMovie that often appears on the lock-screen. It can’t be uninstalled or disables which is annoying. 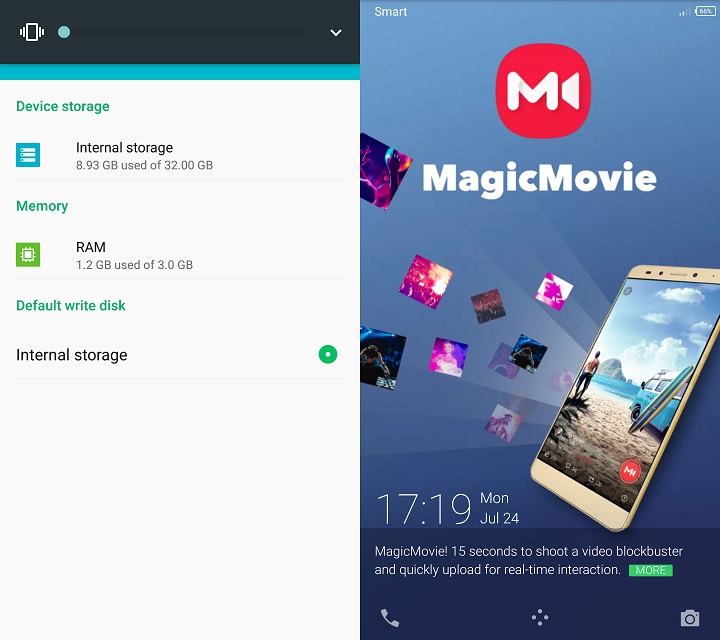 As for its storage, it starts at 32GB with 8.93GB already used, leaving you with around 23GB as usable, which can be expanded via its dedicated microSD card slot. 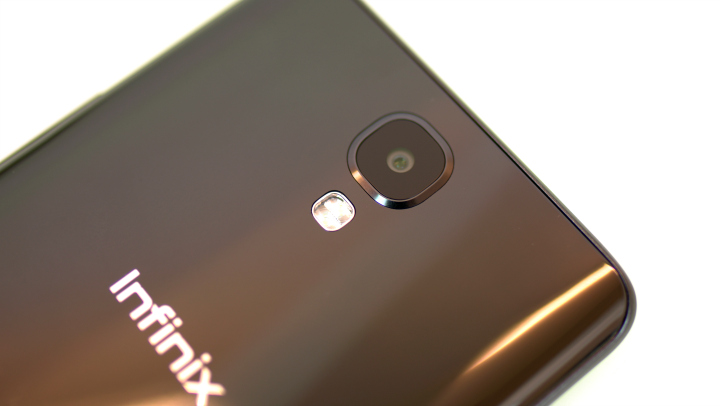 Images produced by the rear camera have decent quality especially if you’re shooting outdoors. There are no overblown colors but could use some boost. HDR mode though is slow so you might want to steady your hands for two to three seconds. Low-light performance leaves a lot to be desired as it is very susceptible to blur and noise.

The front camera, on the other hand, can produce images with soft details but quality will suffice for uploading to social media platforms. It has a front facing LED flash with three levels of brightness which is good for taking selfies in dark environments.

As for video recording, it can record 1080p clips at 30fps in MP4 format. So far the quality is good with wide-dynamic range, although its autofocus has a hard time locking on subjects as it keeps of refocusing. Watch the sample below:

Powering the Infinix Note 4 is a MediaTek MT6753 octa-core CPU clocked at 1.3GHz, Mali-T720 MP3 GPU, and 3GB RAM. So far it performed well when it comes to basic tasks like handling social media apps, surfing the web, taking photos, and running light games. The fingerprint scanner is quick and very responsive. 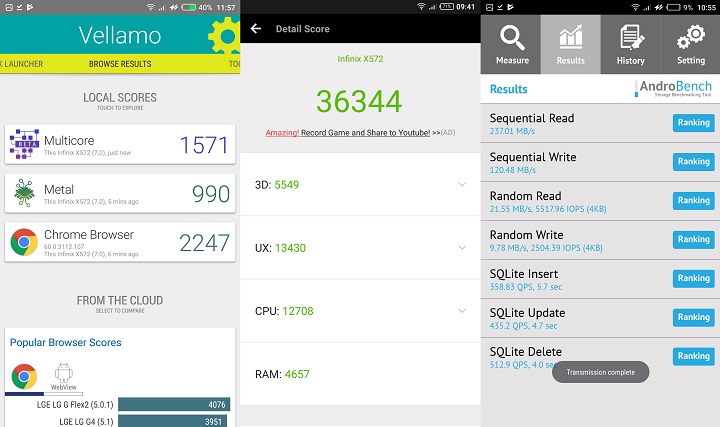 It can still run graphic intensive apps like Vainglory, Mobile Legends, and Asphalt Nitro but you’ll notice some drop in frames. That said, don’t expect consistent smooth gameplay on this device. It can also get hot while playing games which can be felt in the upper parts of the device. Check out the benchmark scores below.

Connectivity-wise, the Infinix Note 4 has full dual-SIM support meaning you can put in two SIM cards without sacrificing microSD card functionality, 4G LTE, WiFi, Bluetooth, Gyroscope, and GPS. Pretty basic but it works as advertised. Call quality is good and locks into mobile data quickly as long as you’re in an area of good coverage.

For those who don’t like charging their phones multiple times in a day, the Infinix Note 4 won’t disappoint with its 4,300mAh non-removable battery. It can last us a day and a half and sometimes up to two days if go light on games and mobile data. 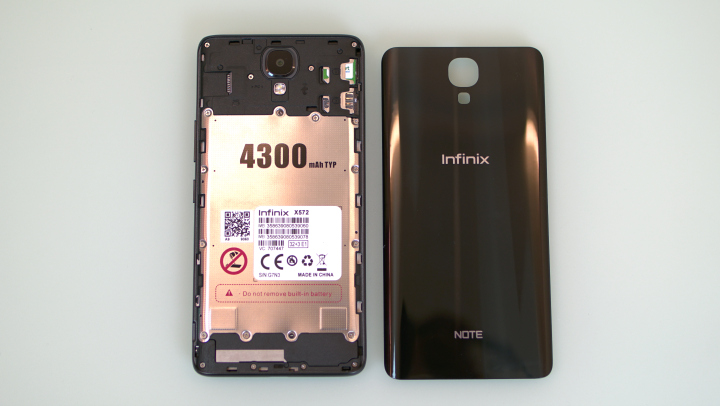 PC Mark’s battery test rated it at 9 hours and 39 minutes. Which is good but not exactly the best in class. For comparison, the Xiaomi Redmi 4 Prime with 4,000mAh battery and Snapdragon 625 CPU was able to achieve 18 hours and 31 minutes. Our video loop test, on the other hand, got us 15 hours and 7 minutes of playback.

The Infinix Note 4 offers features that you won’t normally find in other smartphones in the same price range like the large 5.7-inch Full HD display, 3GB RAM, 4,300mAh battery, and Android 7.0 Nougat. In addition, it has a decent camera, dual-SIM with dedicated microSD card slot, 4G LTE, and a fingerprint scanner. It won’t impress heavy mobile gamers given its processor but if you’re a light to mid user, this should suffice. Lastly, it doesn’t ask much for Php8,999, so if you’re looking for a daily driver in this price range, this is worth considering. 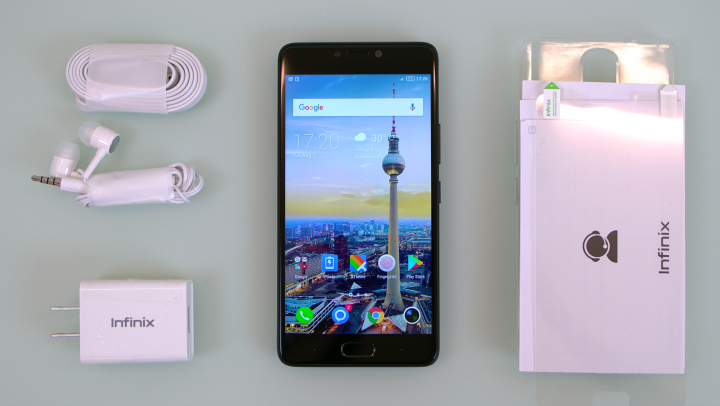 What we didn’t:
* Body is a fingerprint magnet
* Not for heavy gaming
* Ad from a preinstalled app