As more and more smartphone vendors go the direction of glass and metal alloy in their flagship devices, LG took a different step to differentiate its flagship device in 2015. But is the perception merely skin deep? Check out our full review of the LG G4 after the break.

Announced last April 28, the LG G4 arrived in the Philippines exactly a month after — in May 28. LG has been pretty quick to make the local release since the debut of the G2 and has since carried the same swift delivery as the G4. Author’s Note: For the purpose of this review, we got an early shipment of the Korean variant which has a few difference from the Philippine variant; most notable of which is the dual-SIM feature.

Without looking much closer, the G4 and the G3 might not have huge cosmetic difference between each other. LG already has that signature look and form factor that is distinctly associated with the G-series. The G4 retains the same 5.5-inch form factor but with less rounded corners and arched shape. 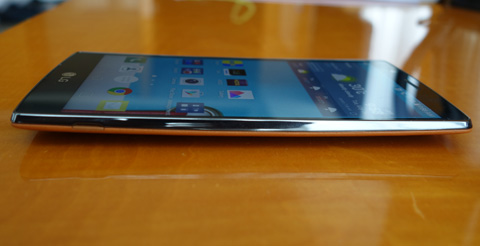 The lightly curved look is achieved by creating a rounded back cover, a chiseled edge leading towards the flat front panel. This gives the perception that the front glass panel also arches inwards.

The layout and placement of buttons and ports of the G4 is exactly the same as the G3. And because there are no physical buttons around the sides, the G4 looks very unified and solid. 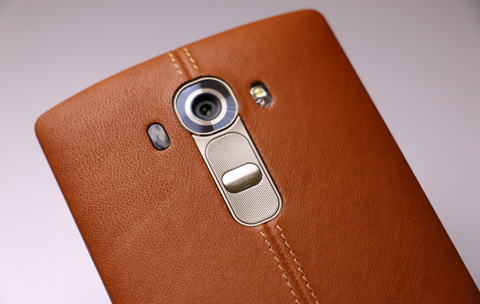 The huge 16-megapixel camera is at the back, flanked by the LED flash, color spectrum sensor and the laser auto-focus on both sides with the Rear Key for the power and volume controls directly below it.

Size-wise, the LG G4 is slightly thicker (9.8mm vs. 8.9mm) and heavier (155g vs. 149g) than the LG G3 though we could not really figure out how that came about and what caused the extra baggage.

LG was among the first brands to use a QHD panel with the LG G3. The high-resolution display (1440×2560 pixels) continues to be at the top of the LG G4’s features with a more improved Quantum Display. The G4 has a higher contrast ratio and wider color gamut compared to the G3. LG also managed to increase brightness by as much as 25% on the G4 by employing N-Type Liquid Crystal in its LCD. 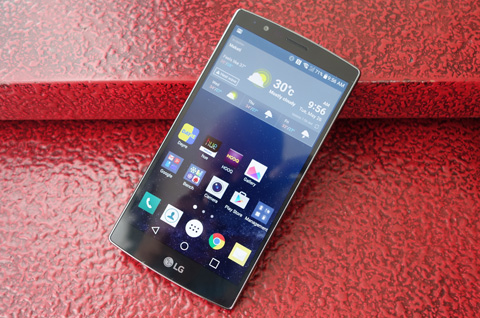 LG retained the 5.5-inch display size of the G4 which is the largest among its contemporaries (Galaxy S6, Xperia Z4, iPhone 6) yet the gross handset size is still small enough to avoid being labeled a phablet (like the iPhone 6 Plus).

The high pixel density adds to the crispness and clarity of the screen. It’s great for web browsing and movie playback. Outdoor visibility is great, thanks to the increased brightness and contrast ratio. 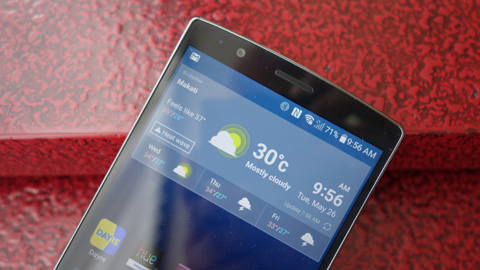 The claimed 98% DCI color gamut may sound alien to regular folks but when you place the G4 and G3 side-by-side and crank up the brightness to full, that’s where you’ll notice the difference contrast, color saturation and over-all brightness of the IPS Quantum Display. 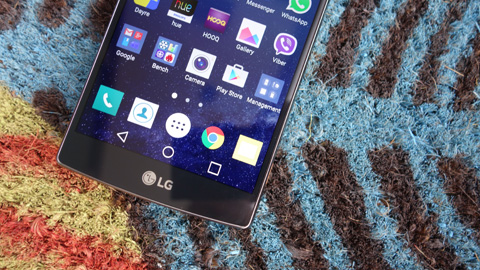 Like its predecessor, the G4 also came with an infrared laser which can be used as a remote control for a number of household appliances.

The loudspeakers at the back is placed the the bottom corner is surprisingly pretty loud and pleasant. 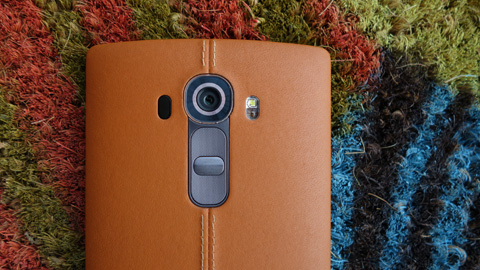 While most people would just resort to the Auto Mode when taking shots, the Manual Mode offers a lot of possibilities that you would not get in most smartphone cameras. Among them is the ability to do prolonged exposure, a technique photographers used to do using dSLR cameras. 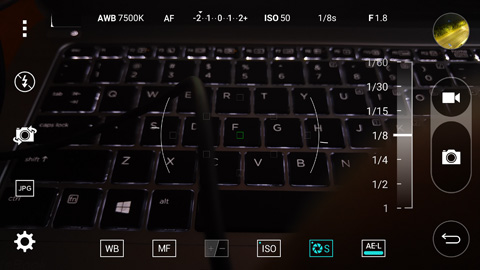 The ability to manually control some aspects of the camera allows the user to take unusual photos that’s almost impossible to get in Auto mode. In the shots we took here, we were able to set ISO to 50 and shutter speed to 0.5 seconds. 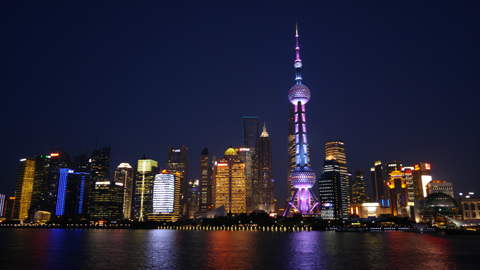 In Auto Mode, you would normally get this type of results. 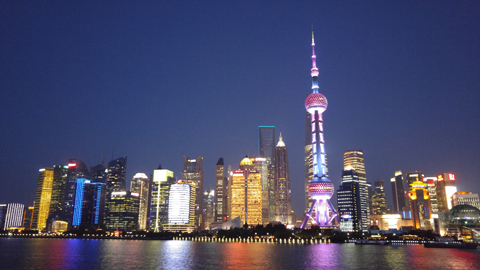 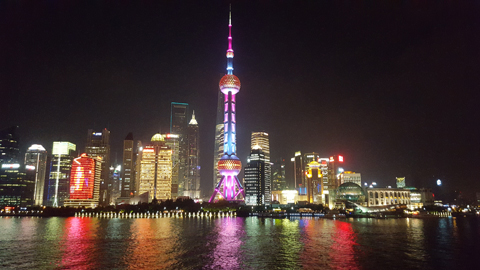 You will see a lot of noise as the camera tries to compensate for the low-light environment.

Light trails such as the one below are only possible when you have Manual Mode and control the shutter speed. 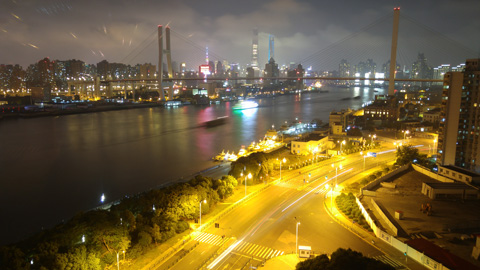 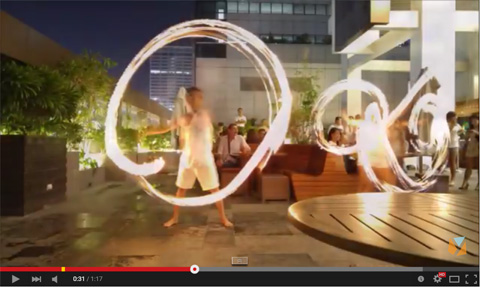 We found the tri-axis optical image stabilization system to work very smoothly when we need it and there were many occasions where it made a lot of difference when we’re shooting.

LG dropped the extra LED flash and replaced with a color spectrum sensor. The purpose of this sensor is to identify and measure ambient light which then allows it to automatically adjust the white balance to compensate.

CSS improves color accuracy by precisely reading the RGB values of the ambient light in a scene, as well as the infrared light reflected from objects. CSS uses this information to adjust the camera’s white balance and flash color to create images that are as close to what one would see with the naked eye. With Color Spectrum Sensor, no longer will reds appear as bright orange or whites as dull yellow.

The G4 also has a double-click on the bottom volume keys to quickly launch the camera app but it’s limited to only when the phone is in sleep/idle.

LG managed to get Android 5.1 Lollipop on the G4 right out of the box. The G4 is perhaps the one flagship which has the latest version available in the market, Android 5.1. 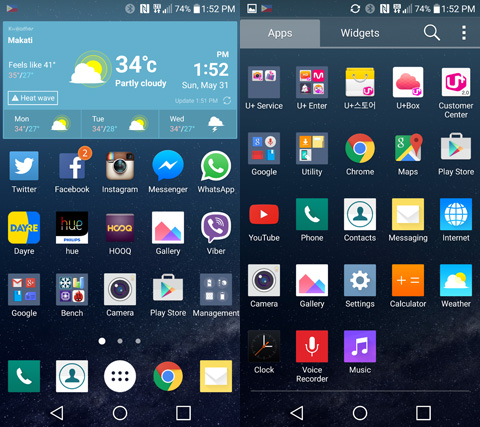 The UI is simple, uncluttered and not much bloatware. LG’s customization on top of Lollipop was at a bare minimum.

A lot of the practical usability features that LG introduced since the G2 have been integrated and improved on the G4. There’s the double tap feature that’s been copied by many, the Knock Code, Dual Window, QSlide and the customizable homescreen buttons. 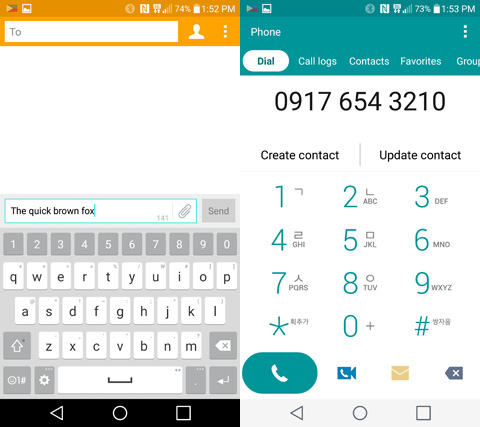 The G4’s familiar interface is pretty simple and easy to use that it gets things done really quickly. The bright, pastel-like colors of UX 4.0 follows a similar design signature as Android’s Material Design principle. The virtual keypad and keyboard are both comfortable and easy to use.

LG also threw in 100GB of Google Drive free for 2 years. The 32GB internal storage is good but you can always supplement that via a microSD card slot which supports capacities of up to 2TB (yes, that’s 2,048GB). 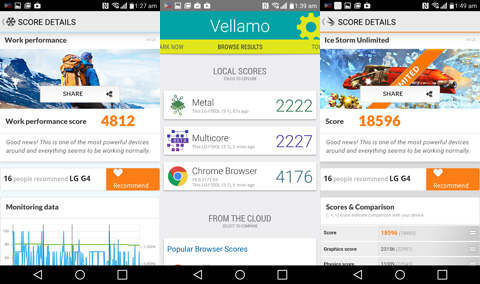 The Qualcomm reference design has 2 x 2.0GHz and 4 x 1.5GHz for the Snapdragon 808 but LG slightly lowered the clock speed to 2 x 1.8GHz + 4 x 1.44GHz in order to better manage heat issues originally discovered with Snapdragon 810 in the G Flex 2.

We’re expecting to get better scores on the G4 compared to the G3 although it won’t be a huge jump from the 801 to the 808. However, the Adreno 418 graphics should offer a huge performance boost over Adreno 330 and help with pixel-pushing that 1440×2560 resolution. 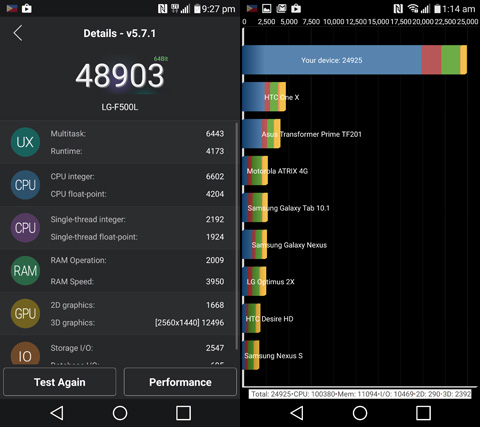 LG released the dual-sim variant of the LG G4 in the Philippines. Both micro-SIM card slots are accessible at the back when you remove the cover (Note: Our review unit is a Korean model and only has one microSIM card slot). It’s interesting that LG also opted to introduce the dual-SIM model in the Philippines as it is becoming the trend lately.

Voice calls are clean and crisp while SMS are sent and received promptly. The Philippine variant which has a dual-SIM functionality is also dual-LTE. There’s a complete suite of connectivity options ranging from WiFi, Bluetooth, NFC, Miracast and GPS with GLONASS support.

The G4 has a built-in LG AirDrive that allows you to manage the content of your handset wirelessly over WiFi or 3G. The LG Health also has a built-in pedometer which gives the handset some level of activity tracking for the user.

One of the features we really liked about the G4 is the built-in IR blaster which they first introduced in the G2 a couple years back and continued to be one of the most useful features to date.

Given that the LG G4 still had the same 3,000mAh battery rating as the G3, we did not expect much in terms of battery life. However, the G4 has a couple of new features that should help in battery performance.

One of the biggest factors would be the Snapdragon 808 chip. It is manufactured in the 20nm process which is more power efficient compared to the 28nm of the 801. It also has 64-bit support and uses the big.LITTLE architecture which handles power consumption better with the low-power Cortex-A53 processor. In our standard battery benchmark using PCMark, we were able to get a rating of 6 hours 25 minutes which is about 24% better than the 5 hours 16 minutes that the G3 got from the same test. With the manual battery test, we managed to get up to 11 hours and 30 minutes of video playback using MX Player at 50% brightness and 50% volume with an earphone plugged to the phone. This is about 15% – 25% better compared to the performance of the G3 using the same test. We did not notice any excess heating of the device despite continued heavy use although the area around the camera lens is where most of the heat dissipates. Maximum core temperature we recorded was about 41.3 Celsius.

The built-in Battery Saver limits background services once the battery life reaches a low 15% so the last remaining juice is stretched. There’s no built-in wireless charging on the handset but there’s an optional folio case (sold separately) which supports it.

LG tries to put a different twist in creating their next flagship smartphone. The G4 traded a bit of raw power and cold industrial design in favor of organic yet practical execution. Then they peppered it with a few sprinkles of interesting features like laser auto focus, camera manual mode and support for camera RAW. 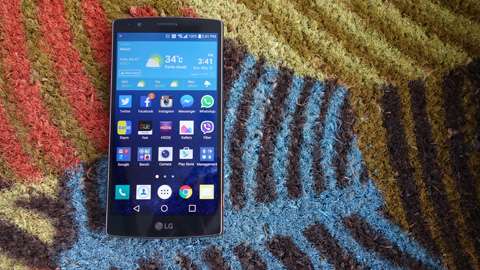 The LG G4 is a breath of fresh air. The leather treatment is a surprise introduction that changes the way we regard the handset. The form factor and material design is so natural you won’t have that urge to wrap it in a protective case.

LG took a great phone, the G3, and made it even better with the G4 — what you get is an unassuming but genuine flagship handset.