First up is the Optimus L3II, it sports a 3.2-inch QVGA display which is the same size as the original L3 but with the addition of IPS technology for better viewing angles. LG also bumped up the battery a bit at 1,540mAh battery compared to the predecessor’s 1,500mAh. 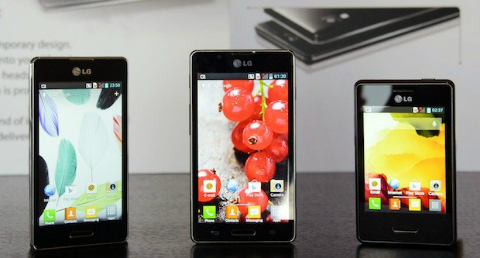 Next is the Optimus L5II which retained its display size at 4 inches. However, it now has a higher WVGA resolution (800 × 480) compared to the HVGA (480 x 320) resolution of the Optimus L5. Unfortunately, there’s no mention of IPS technology for the L5II. As for battery life, it now has a larger tank at 1,700mAh compared to the 1,500mAh of the L5.

Now for the Optimus L7II, it has an upgraded processor, bigger RAM, better camera, larger battery, dual-SIM variant, and runs Android Jellybean. Take a look at the key specs below:

All three phones will feature the L SeriesII’s four new design elements: Seamless Layout, Laser Cut Contour, Radiant Rear Design and Smart LED Lighting on the home button. Expect these phones to make a debut at the MWC 2013 this month.

only L7 is good in these phones.
better buy L9 much better .