How far can your Php2,999 go? If we’re talking about smartphones, not very far. But once in a while, you’ll be lucky to bump into an offering like the MyPhone my86. Check out our full review of MyPhone’s budget device loaded with a Digital Television tuner and Android Lollipop dubbed as the my86 DTV.

Note: Parts of our review were integrated from our first impressions article, which you can check out here.

The my86 DTV presents itself with a standard polycarbonate look that’s been seen as a signature look for its recently released devices. The screen guard has been applied during manufacturing, so all you have to do is to peel off the label to reveal the device in its full glory. On the front, we have the five-inch display, non-lit capacitive buttons, the call speaker, and the five-megapixel rear camera and its accompanying LED flash.

At the right side of the device are the power/lock button and the volume rockers, both are embellished in a chrome color. At the top, we have the 3.5mm audio jack positioned at the left. You can also notice a part of the camera, which protrudes because of the back shell’s construction design. The microUSB port and the microphone are both located at the bottom part of the device. Also included right at the corner is the slit that can be used to gain access to the inner parts of the back of the phone. A 13-megapixel rear camera, surrounded by a chrome accent, its partner dual-LED flash, and a small rear loudspeaker grille can be seen at the back of the device. The back plate, bearing a black color with a matte polycarbonate texture and features MyPhone’s trademark Philippine Map design,  is susceptible to fingerprints and smudges. It has a unibody shell that exposes a few internals circuits such as those of the audio port’s. Exposing the device, it has dedicated slots for a two micro SIM and a microSD cards. It’s quite a hassle, though, to remove the 2,300mAh battery just to insert these cards right onto their slots.

Overall, the my86 may be a bit hard to handle for those with sensitive skin due to the sharp edge the front panel exudes. Device grip is good, but may be a tad heavy compared to other 23,00mAh battery-equipped contemporaries due to a rather heavier overall device construction.

Spearheading this sub-Php3K is a five-inch, two-point multitouch display that registers a high-definition 720p resolution. Viewing angles are mostly good, while colors, sharpness, and the brightness are good for most activities. Putting the device under the high noon, though, tells a different story as it produces a bit of glare that may hamper outdoor usage even when set on the brightest.

Adding to this, a lot of touch issues plague the screen as it registers a different command once we use it. For instance, we had a hard time zooming in when taking a video, accurately moving the text cursor around when composing a note is a bit difficult, and swiping fingers to scroll on an app registers as a tap on most occasions. 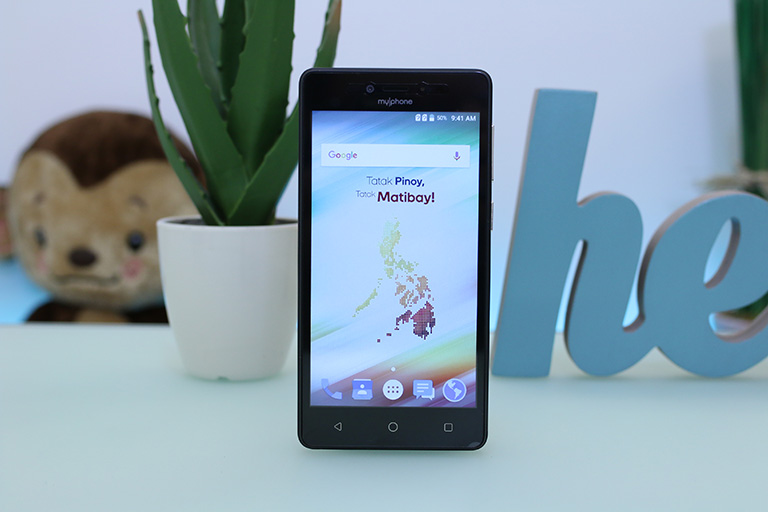 The default video app can play most common video files without any hassle, same goes with a few music formats such as mp3, wav, and m4a. The loudspeaker is loud enough to fill up a large room, and may sound a bit generic but nevertheless clear enough for listening. The same goes with listening to music with headphones, but you may find some of your newer IEMs incompatible as it doesn’t offer support to most headphones with in-line microphones. The My86’s unique charm is its Digital Television feature that encompasses a quick browse of today’s available free Full Seg and 1Seg TV channels available on ISDB-T signals. To further enhance the signal it captures, there’s a separate, external antenna included into the device that’s plugged directly into the audio port, which may be a bummer for those who prefer to watch TV using headphones. For the most part, headphone wires can also act as the TV’s antennae similar to how any phone does it with FM radios. 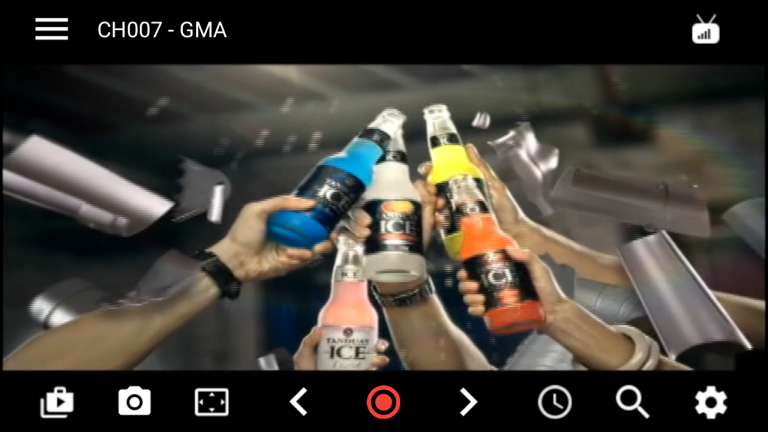 The Digital TV app takes a bit of fiddling to find out is whereabouts: the channel list can be accessed by clicking on the top-left portion, while searching for available channels can be accessed by tapping on the magnifier button beside the settings. There’s also an option to take a screenshot and record videos you’re currently viewing. Do take in mind that play store-like icon though, as it’s a place where you can access your recorded programs for playback. Overall, the DTV feature is good, but it suffers from minimal to moderate lags partly because of signal issues. Watching Full Seg channels do take up a lot of battery juice though, and can drain your phone in 2-3 hours.

The my86 presents itself with a 13MP rear camera, which takes decent shots both indoors and outdoors with near-realistic colors and decent amount of sharpness and exposure. White balance sometimes is off, as whites tend to become yellows at rare times. The dual LED light is bright enough to become your rescue flashlight, but it isn’t that bright to give a better photo when taking night shots. It’s also worth noting that the phone shoots only at a 4:3 aspect ratio on its higher megapixel counts, and the stock camera app tend to do with very slow focus and shootout that takes 2-3 seconds. The front camera also features an LED Flash, and it helps when taking photos in dim locations.Here are some sample photos: 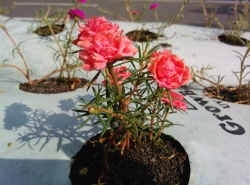 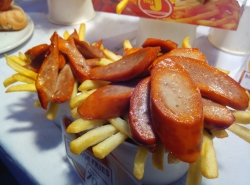 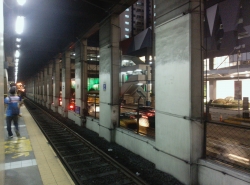 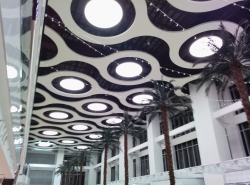 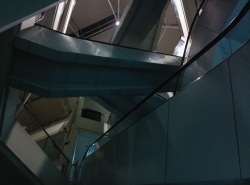 When in video mode, the camera can take decent full HD shots at 30 frames per second with good color saturation and clarity. There’s also an option to take photos while recording by just tapping on the screen. This happened a lot of times when we were recording a sample video, where the touch sensitivity issue is causing the device to take a number of photos in succession while recording instead of registering as a pinch for zooming out or in. See the sample clip below:

The my86 is baked with an Android 5.1 Lollipop mobile operating system right out of the box. The OS, visually, seems to be as stock as it can be, but we noticed several modifications: a ‘kill all apps’ button is present on the recent apps screen, there’s no Android welcome screen as it went straight to the home area upon our first opening, and there were noticeable Lollipop features that were removed such as the option to add other users or a guest account. It’s as stock as you can get, and it’s fluid and seamless. 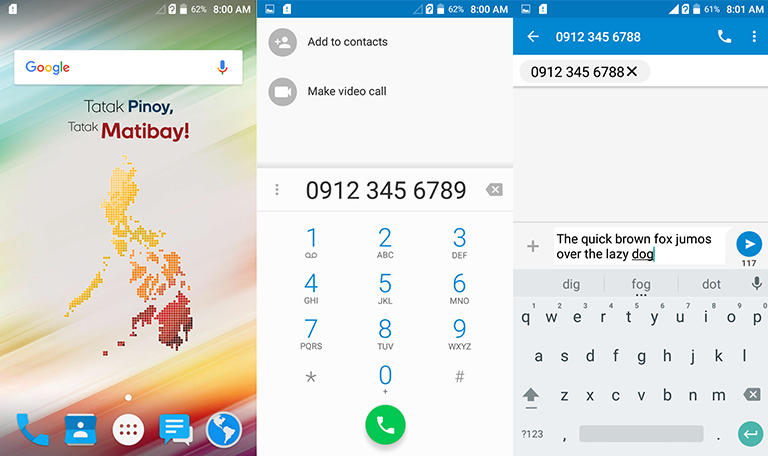 The phone also has a few pre-installed applications such as social media (Facebook, Twitter, Instagram) and from the Creative Hothouse such as Fotoku and Kungfood. There are also Clean Master and OnSale apps installed. Luckily, you can remove all these except for Facebook and save tons of space in the long run, giving you 4.58GB of space to fill in with your favorite apps and files.

The device has a generally decent performance, save for a few mishaps: I’ve encountered issues when using Instagram’s latest UI update, as I can’t get past the photo processing pane. The phone also had a lagged moment one day; and there was a need to remove the battery to kickstart the device again. 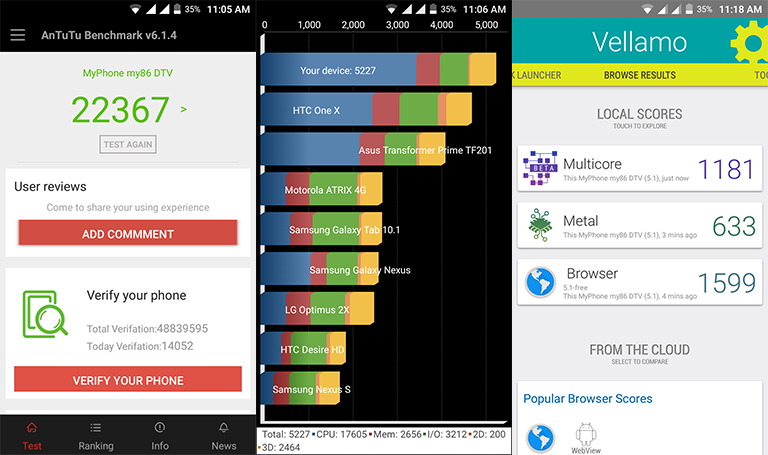 Game performances also suffer a bit, as it would also have dropped frame rates and light to moderate hiccups, even on small yet graphic-intensive ones like Hungry Shark Evo or Zombie Tsunami. The device also warms up in the upper-back portion at the most basic of tasks such as charging or browsing with WiFi, but it’s nowhere near uncomfortable levels.

While it sports an affordable price tag, connectivity is not sacrificed. 3G reception is surprisingly good and it can connect to networks fast. The call speaker is loud and audible, and the microphone is decent with a bit of grains on the side. Other connectivity options such as Bluetooth, GPS, and WiFi work well. 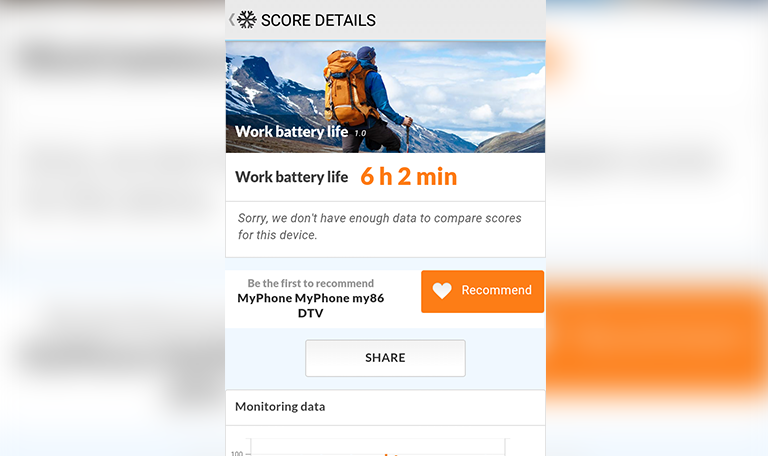 On the other hand, battery life can be an issue for those looking for this as a primary phone. We found to have a need to charge at least twice a day since it drains really fast, even when idle and set aside. Its battery percentage on the notification panel (it’s on by default) also do not regularly update, which will make you think that you still have some juice left only to find out that it’s down on power a few minutes later.

Our PCMark battery test clocks the my86 DTV at 6 hours and 2 minutes, which is underwhelming. Yep, a powerbank is a must-have.

I personally bought the my86 as a contender for my new phone after I’ve lost my primary one a few weeks back. On the bright side, Myphone’s my86 DTV has a good build, takes decent photos on both of its cameras, and is a good phone for those on the lookout for an affordable device while not missing out on the latest soap operas on primetime. It’s a generally decent performer, and the build and its added DTV feature doesn’t make you think that the device isn’t something worth Php2,999. Truth to be told, I wasn’t satisfied with my purchase as a lot of features were cut just to make it to the sub-Php3k mark. Everyday operations, even on the most basic of tasks, were hampered by the persistent touch sensitivity issues. Add to that other problems such as the absence of an LED notification light, slow camera focus and shootouts, an unoptimized operating system that edited out a few useful features and excessively drains its battery, and the company’s reputation in after-sales as question of a future update, being a budget device, looms.

For the same price, I could’ve bought a one-year old but a more well-received my27 instead, or a Moto E on sale with better battery life and great OTA update support, or its my85 DTV contemporary with Marshmallow out of the box. Nevertheless, I’ve learned to bear with what’s on the table, and will stick to this as a daily driver while I’m still on the lookout for the greater one.

Our MyPhone my86 DTV unit was bought at Automatic Centre in Gateway, Cubao.