The brand O+ didn’t seem to have any trouble winning the hearts of thrifty Pinoys with their inexpensive offerings. One of these devices that sold like pancakes as soon as it hit the market is the O+ 8.3 Android. Catch our full review of the affordable dual-SIM handset after the break.

The 8.7 Android has a pretty straightforward build. Apart from the gray lining that goes around the side of the phone, which aids user in locating the ports and buttons on the phone, the handset’s body is almost entirely composed of black glossy plastic. 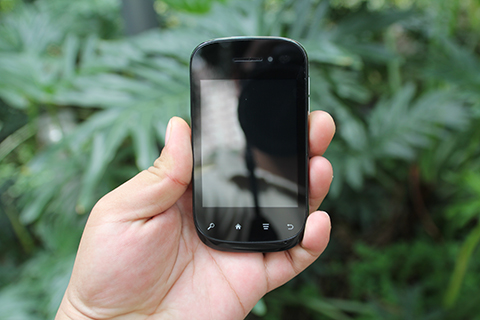 A quick tour around will reveal the Micro-USB port on the left while the Volume buttons on the other side. The top part houses the Power/Sleep button along with the audio port. Back portion sports the 3.2MP snapper which is accompanied by the speaker grill.

Lifting the glossy back plate, you’ll be greeted with the phone’s 1400mAh battery. Underneath the battery pack are three slots, 2 for SIM card and one for the Micro-SD card.

The 8.7 Android sports a 3.2â€ display with QVGA (320×240) resolution. It is a bit underwhelming to say the least, especially if you compare it with its closest competitor, the Lenovo A65 that boasts a 3.5-inchHVGA (480 x 320) display. This aspect of the phone is definitely not its strongest feature, but should be enough for basic phone tasks.

We noticed a split-second lag when we tried watching xvid rip on the device. It’s not that terrible, but wouldâ€™ve been better if it wasnâ€™t there. 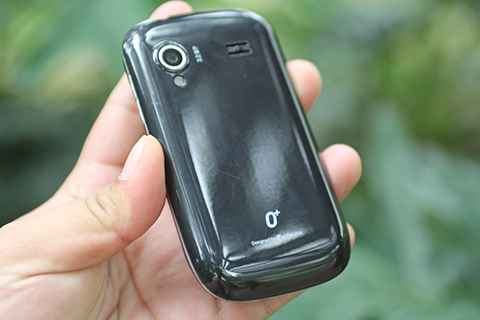 Sound output out of the loudspeaker is pretty loud. Although not as loud as the speaker, the audio through a pair of headphones is also pretty decent for the most part. Call quality was also nice, we didn’t experience too much of a hiccup when we were on a call. The minor bumps that we encountered were probably network-related, so we didn’t take it against the phone.

As mentioned earlier, this device is equipped with a 3.2MP camera. There’s nothing extraordinary about it. It gets the job done most of the time, but also struggles in dim conditions. Good thing the snapper is paired with an LED flash. Here are sample picture taken with the 8.7 Android

This phone may have given up some grounds to the Lenovo A65 in the display department but it compensates it by packing a newer and slightly faster processor. The 8.7 Android is equipped with a single core MediaTek MT6575 processor which is clocked at 1GHz and is backed by 256MB RAM. 200MHz isn’t that much of a difference on paper, but this slight bump in speed really aids the phone in executing tasks smoothly and with lesser lags. 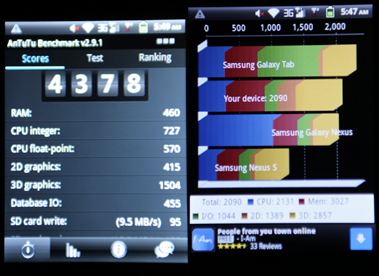 As for our usual synthetic benchmarks, the O+ 8.7 Android scored a little bit better on AnTuTu and NenaMark II when pitted against the A65’s score. It scored 4â€™378 on AnTuTu while NenaMark clocked it at 35.8fps. However, it got a low score from Quadrant Standard which only gave it 2â€™090. 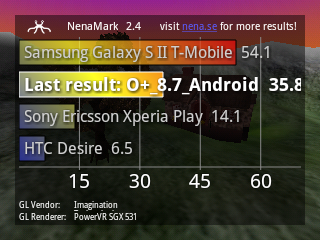 As with other affordable Android handsets in the market, this one also has Gingerbread (2.3.5) installed on it out of the box. Not much to write home about besides the fact that it is a skinned version of the OS which may take some getting used to.

Given that the handset only has little over 3-inch of real estate, it can be quite tasking (especially for people like me with fat fingers) to use the on-screen keyboard. It’s a good thing that phone was able to compensates for its small screen by having a very responsive keyboard. 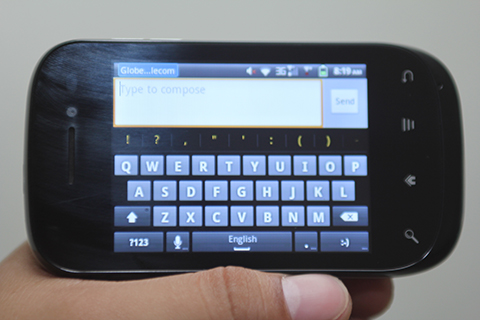 Although it’s a 100mAh shorter than the ones found on A65, the difference in battery life is insignificant. The 1400mAh battery of the 8.7 Android should get you through an entire day to a day and a half with moderate-to-heavy usage. When barely used, the handset stays on for almost 3 days.

Apart from its lack luster display, the O+ 8.7 Android should delight any prospective buyer eyeing a dual-SIM, touchscreen Android handset. With an asking price of only Php4,995, this smartphone should give any entry-level handsets a tough time in the market. In our opinion, this handset has what it takes to be the next Galaxy Y given the right push from the fairly new player in the local market.

What we liked about it:
* Affordable price
* Decent battery life
* Doesn’t lag that much

What we did not like:
* Poor screen resolution
* Internal storage is too small (128MB)
* Cheap all plastic build