OnePlus has just unveiled its newest flagship smartphone, the OnePlus 7 series. Included in the lineup is the standard OnePlus 7, a more powerful OnePlus 7 Pro, and a OnePlus 7 Pro 5G. For this comparison, we matched the 7 Pro with one of the first flagships released this year, Huawei’s P30 Pro. See how they fare against each other. 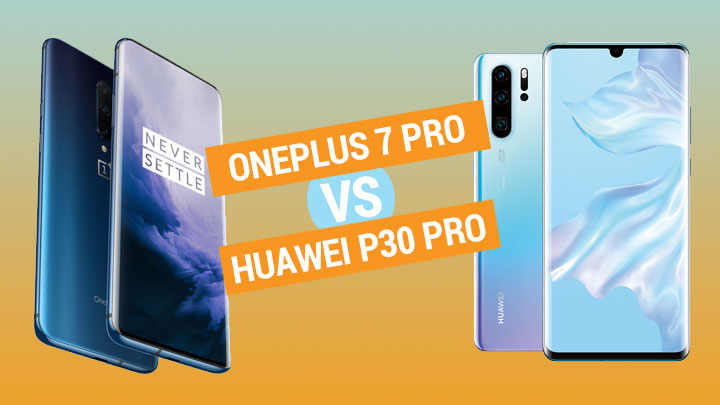 First up, let’s talk about their display differences. The OnePlus 7 Pro offers a heftier AMOLED display, measuring at 6.67 inches, compared to the Huawei P30 Pro’s 6.47-inch OLED screen. The 7 Pro also sports a 3120 x 1440 resolution, beating the P30 Pro’s 2340 x 1080 resolution. Plus, the P30 Pro has a drop notch, housing the front camera whilst the 7 Pro has no distractions on the display, thanks to its pop-up front camera mechanism. The clear winner for this round is the 7 Pro.

When it comes to performance, the 7 Pro is fitted with a Snapdragon 855 while the P30 Pro comes with a Kirin 980 chipset. They’re both pretty powerful processors on their own but the 7 Pro takes the cake for this one as in terms of raw performance, Snapdragon’s chipsets slightly edge out the Kirin chips. To give you an idea of that here’s benchmark comparison table of the Xiaomi Mi 9 that has a Snapdragon 855 chip and the Huawei P30 Pro with its Kirin 980 chip.

The 7 Pro’s RAM offers begin at 6GB with a maximum of 12GB, while the P30 Pro only has a lone 8GB offering. Storage-wise, both smartphones have a base of 128GB but the 7 Pro can only offer up to 256GB with no expandable storage. On the other hand, the P30 Pro can go up to 512GB and has an expandable option via an NM card.

The P30 Pro made headlines when it unveiled its 40MP main shooter and 50x digital zoom technology, along with a 20MP ultra-wide angle camera and an 8MP shooter. As for the 7 Pro, it’s equipped with triple rear cameras, composed of a 48MP main + 16MP ultra-wide + 8MP telephoto shooters. We’ve yet to see the results of the 7 Pro’s cameras quality-wise but since we’ve seen how the P30 Pro performs, we’ll give this round to them. Plus, you can’t deny that the 50x digital zoom is a pretty sweet addition along with everything else. Taking it over to the front camera aspect, the 7 Pro employs a pop-up mechanism for its 16MP shooter. Meanwhile, the P30 Pro has a 32MP front camera, encased in a drop notch. We’d like to give a point to the 7 Pro just for its design novelty but the P30 Pro would likely blow it out of the water quality-wise. Here’s a comparison of their DxOMark scores:

Speaking of water, the P30 Pro has an IP68 resistance rating while the 7 Pro has no mention of any resistance rating. That’s something to keep in mind in for those who’d like additional protection on their smartphones, more than just having a protective Gorilla Glass coating.

Both devices have face unlocking capabilities, however, the P30 Pro does it with a 3D Face Unlock technology. Both smartphones also have an in-display fingerprint scanner. USB Type-C is pretty much the standard port these days so it’s nice to see that both the P30 Pro and 7 Pro have it as their ports. OxygenOS runs on the OnePlus 7 Pro while the P30 Pro has EMUI 9.1; both operating systems are based on Android 9 Pie anyway so each of them is a winner in this aspect.

If you’re into a larger display, bigger RAM options, having the latest Snapdragon chipset, and attracted to the novelty of pop-up mechanisms, definitely go for the OnePlus 7 Pro. Otherwise, if a slightly larger battery capacity with wireless charging, expandable storage, 50x digital zoom, and being worry-free with an IP68 resistance are your kind of things, then go for the P30 Pro.

Which flagship smartphone are you more drawn to? Share it with us in the comments!