Realme has launched two new smartphones, and one of them is the Realme 5 Pro. It has quad cameras, Snapdragon 712 chipset, up to 8GB RAM, and a large 4,035mAh battery. Sounds like a powerful mid-ranger, but how does it fare against the Xiaomi Mi 9T? Find out in our specs comparison below. 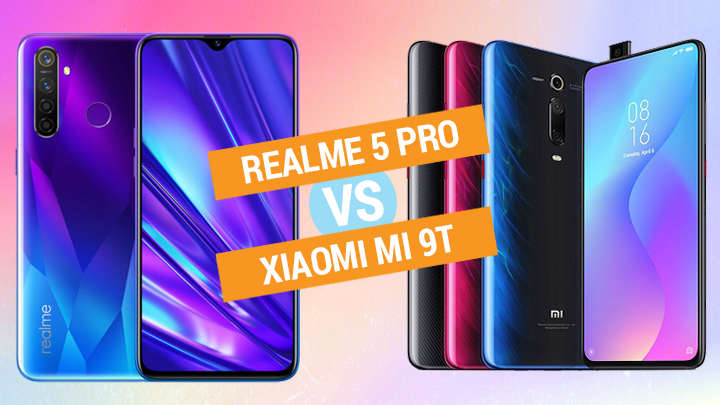 Let’s start with the display. Although the devices sport different screen sizes and pixel counts, their differences are small enough that you wouldn’t notice. What you’ll notice though are the absence of the notch on the Mi 9T and the types of display panels used. IPS and AMOLED have their advantages, so pick the one you prefer the most. But if you don’t like notches, the Mi 9T is the winner.

Storage-wise, both offer 64GB and 128GB of capacity. However, the Realme 5 Pro has a UFS 2.1 which in our experience gets to around 700 MB/s in Read speeds. UFS 2.0, on the other hand, goes at about 500 MB/s. The Realme 5 Pro also wins for having a dedicated microSD card slot.

For the cameras, both have 48MP main cameras with Sony sensors. The Realme 5 Pro has an IMX 586 while the Mi 9T has the IMX 582. The only difference is that the IMX 586 supports 4K video recording at 60fps while the IMX 582 is capped at 30fps. But based on Realme’s webpage, the Realme 5 Pro can only record up to 4K 30fps, so there’s not much difference here.

What you’ll notice as a user is the other cameras. The Realme 5 Pro has the advantage of having a dedicated portrait and macro cameras. The Mi 9T, on the other hand, has a higher ultrawide camera resolution and a dedicated telephoto camera. For the front camera, the Mi 9T has a higher resolution. As for quality, we’ll know which one is better once we have the Realme 5 Pro on hand.

As for other features, both have USB Type-C and 3.5mm audio port, which is great. However, the Mi 9T has NFC, while the Realme 5 Pro has splash resistance. We don’t use NFC that much, so that splash resistance is better to have. For the fingerprint scanner, the Realme 5 Pro uses the traditional rear-mounted type, while the Mi 9T has an in-display type.

When it comes to pricing, the Realme 5 Pro is yet to launch in the Philippines so we can’t make that an accurate comparison. The Mi 9T, on the other hand, is priced at PHP 15,990 for the 64GB model and PHP 17,990 for the 128GB. Will the Realme 5 Pro be more competitive? We’ll find out soon enough.