Samsung Philippines officially launched the Galaxy S3 Mini last night, along with Globe which is exclusively selling it for the first month. Let’s delve deeper in to the SGS3’s little brother with our first impression after the break.

The S3 Mini, as you might expect, is almost the exact replica of Sammy’s current flagship handset in terms of design. It bears the same Nature-inspired design with rounded edges and metallic lining on the sides. Like it or not, the halfling’s body is also made of plastic with a so-called Hyperglazed coating which is similar to its bigger sibling’s build. 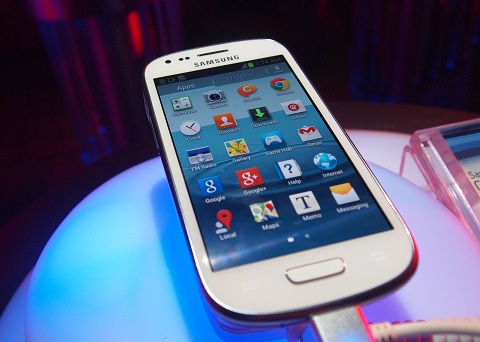 Differences between the two are scarce and a bit tricky to spot, especially if you don’t have an S3 with you to compare. During our brief time with the phone, we were only able to notice a pair of minor design dissimilarities between this device and its flagship brother:

• Placement of the front-mounted VGA camera and the sensors beside it. (Top Left for the S3 Mini and Top right for the S3.)

• Placement of the built-in flash and speaker beside the 5MP camera at the back.

The handset features a 4-inch WVGA display similar to the first Galaxy S. This kind of display configuration may not be as popular as it was back then, but people who don’t have a taste for big-ass smartphones should be well at home with the S3 Mini’s modest screen.

Concealed underneath the glass and Hyperglazed plastic is the S3 Mini’s meek hardware configuration. This comprises of a dual-core 1GHz processor, 1GB of RAM and 16GB of internal storage. It’s not gonna wow any onlookers, but should be enough to handle most of your basic smartphone needs in a satisfactory manner. 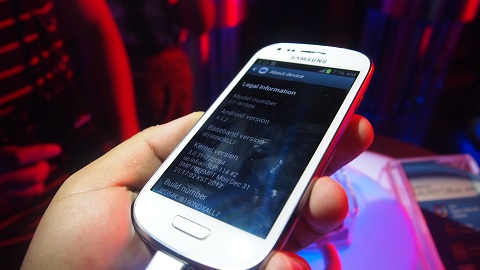 This phone shares the same Nature UX-laden version of Android Jelly bean version (4.1.2) with the SGS3 and SGN2, minus some of the tasking features such as the Multi-Windows view. Given the phone’s mid-ranged specs, it was still able to handle Samsung’s UI quite impressively. It was fluid and responsive for the most part with only minor hiccups in the multitasking aspect.

See also  Meizu handsets to get Lollipop upgrades this year

The Samsung Galaxy S3 Mini is, in every aspect, a smaller and modest version of the South Korean firm’s current flagship handset. It has the same look and feel as the SGS3 but with a smaller screen and a mid-range specification. It may not be the best in class in terms of bang for the buck, but it’s there to provide a more affordable alternative to the company’s high-end offering. This Android smartphone can be had for Php14,990 or get it free under Globe’s UnliSurf 999 plan. The plan includes unlimited surfing and an option to choose 1 of the four Plan Freebies. At the time of writing, the S3 Mini is still not available on Globe’s website but we were informed that they are on the process of including it on their handset offerings.

Good day! Question: I’m not exactly interested in the s3 mini rather the galaxy premier, but have no news whether the premier will be launched in the Philippines. If the latter will not be sold in the country than the s3 mini will suffice. Any ideas on the launching of the Premier in the Philippines? Appreciate much for a reply to my query. Thanks!

no corning gorilla glass ( not scratch-proof). that would be the disappointment.

Before when I first heard that Samsung will make a smaller version of S3, I though everything would be the same except the screen. But when the specs came out, I got disappointed at Samsung. The GS3 Mini is just another name for GS Advance. If you want an S3 mini, go for S2 instead. It has better specs.

siguru i suggest, if s3 mini, LG optimus L9 nalang. have corning gorilla glass, same dual core 1ghz. they have made an 8mp camera for it in asian markets, unlike s3 mini which is only 5mp. bigger display than s3 mini, and higher screen resolution.

@iBullit look for online stores. some offers it lower.

Add 4-5k and you can have an S3. this should be under 12k. theyre just riding in the popularity of S3 nicely done sammy. but, No thanks.

Help me. Should I buy this one or Xperia Sola?

Out of these two, S3 mini is better. It has better battery performance, a removable battery, Jelly Bean out of the box, & more RAM.

“Placement of the front-mounted VGA camera and the sensors beside it. (Top right for the S3 Mini and Top Left for the S3.)”

Thanks for pointing that out in a nice way. :D

“Placement of the front-mounted VGA camera and the sensors beside it. (Top right for the S3 Mini and Top Left for the S3.)”