Vivo Mobile entered the Philippine market back in March. A month later, it launched its flagship, the V3 Max, in India and then arrived in the country early this month. With commendable specs and mid-range price, can the Vivo V3 Max capture the hearts and pockets of Filipino buyers? 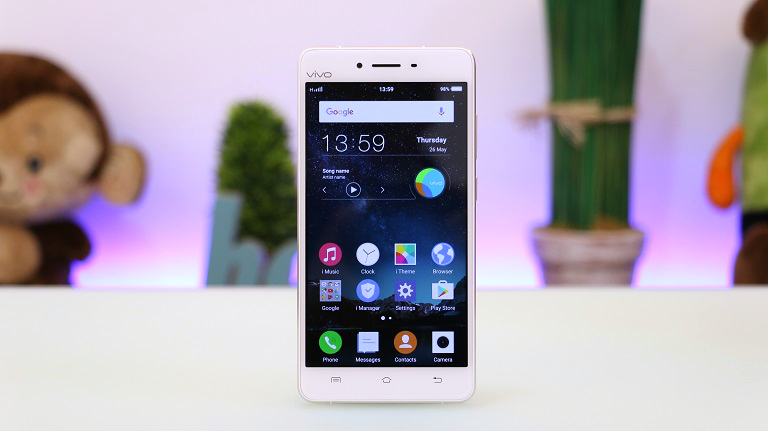 Out of the box, the V3 Max exhibits the aesthetics of a premium smartphone – cold metal body, gold color, thin dimensions, and a glass front the slightly curves at the edges. At 5.5-inch at Full HD resolution, it sports the display size and resolution common in most smartphones. 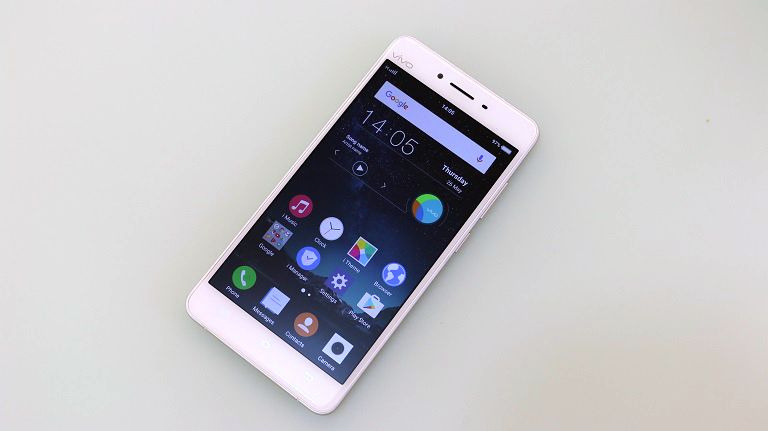 Situated above the display, are the Vivo logo, 8MP front camera, earpiece, light sensor, and hidden at the upper right corner is the notifications light. Down below are three unlit capacitive buttons for navigation – something that is common in most mid-range devices. 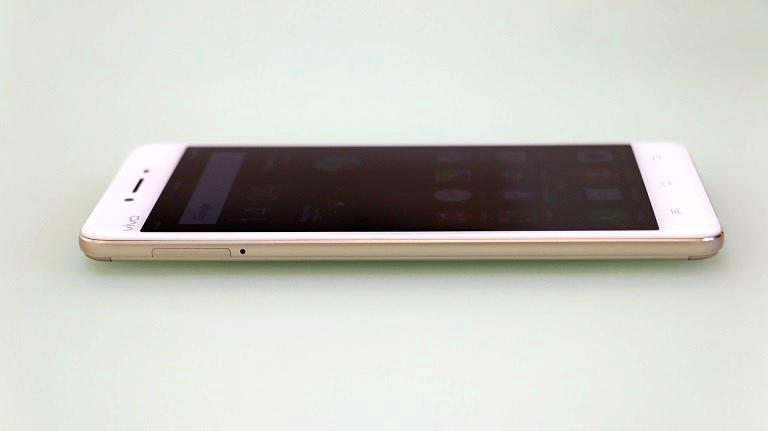 On the left is the tray for the SIM card. It’s hybrid meaning it can either accommodate two SIM cards or one SIM card and a microSD card. On the right are the volume rocker and power/lock button. 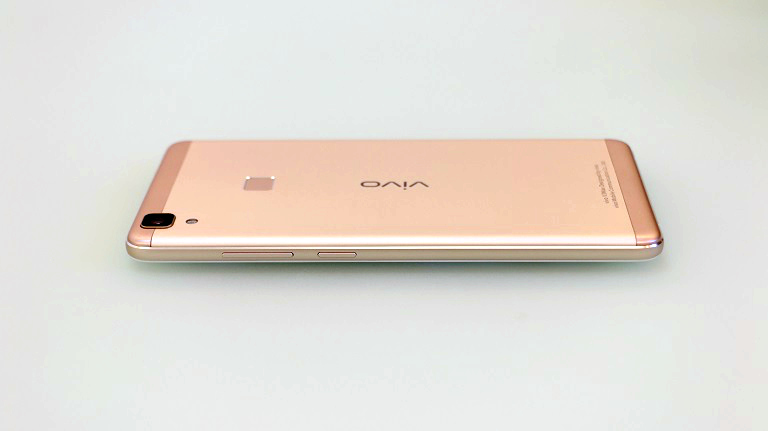 At the top is the headphone jack, while down at the bottom are the loudspeaker, microUSB port, and microphone. 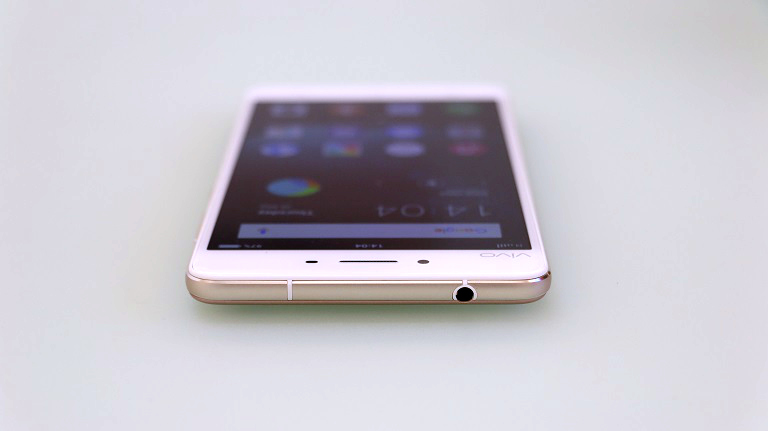 Looking at the back, we have the 13MP main shooter, LED flash, the fingerprint scanner, and the Vivo badge. 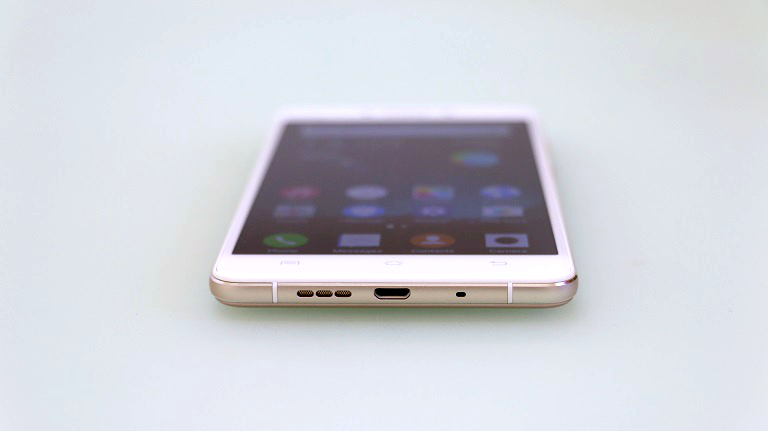 Design-wise, the V3 Max doesn’t offer anything new. It actually reminds us of the OPPO F1. The sides are curved with chamfered edges which makes it easy to grip while the back part has a matte finish that is effective in repelling fingerprints. 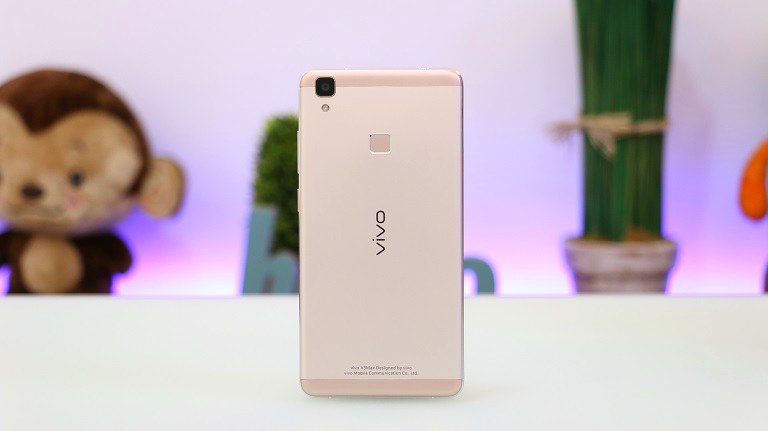 At 5.5-inches and Full HD resolution, the V3 Max sits comfortably at a pixel packed 401ppi. It may not be as high as Quad HD flagships but it still has one of the most vibrant displays around. Images are crisp while colors are well-saturated. It’s also capable of churning enough brightness when used outdoors. 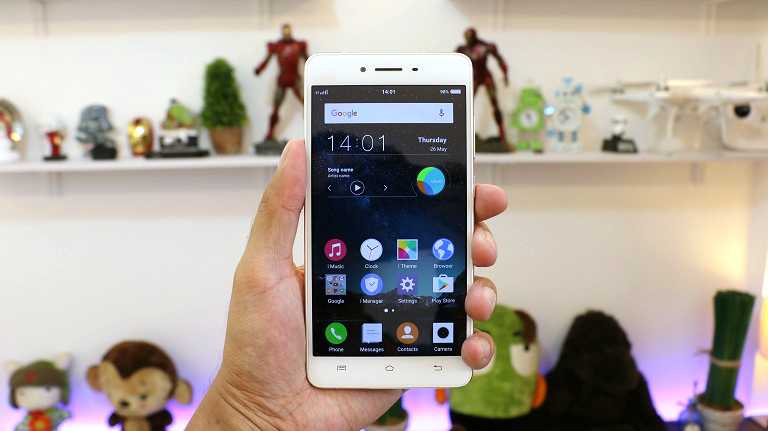 The down-firing speakers may not look like much but it is loud and produces good audio quality. It’s not Bluetooth-speaker good but it sounds better than other smartphones in its price range. It may even sound as good as smartphones twice its price. That said, the V3 Max is a good multimedia device.

The V3 Max doesn’t boast a fancy camera like its expensive counterparts and simply advertises a 13MP shooter with Phase-Detect AutoFocus. Don’t get it wrong though as the camera is capable of producing photos with good quality especially in bright conditions. 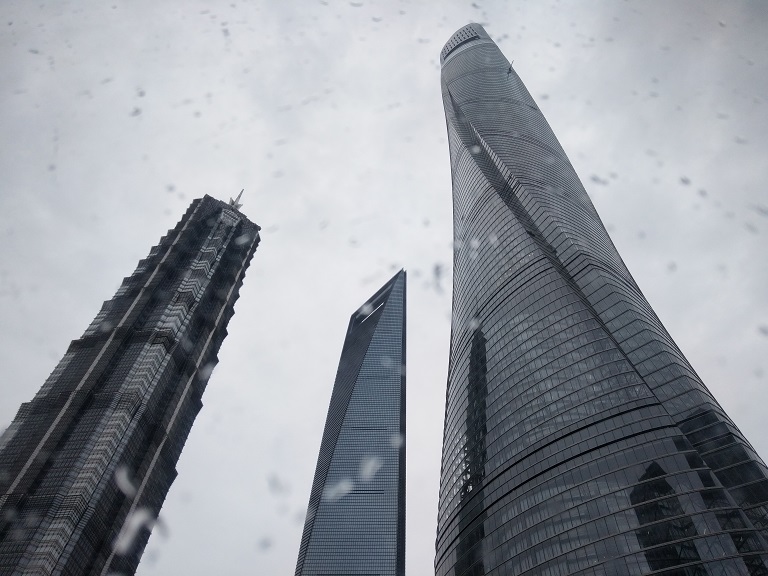 In low-light, it can still hold its own and is quick to focus. Noise in images produced are obvious but has good colors. As for the front camera, quality is okay but struggles in low-light and often produces blurred and noisy images. Take a look at the sample images below.

As for videos, it can shoot 1080p clips at 30fps in MP4 format. Watch the sample below.

Running the software department is Vivo’s FunTouch OS 2.5 based on Android 5.1.1 Lollipop. It uses the same layout as other Chinese smartphone brands – no app drawer. All of the apps installed are accessible via the home screen pages. 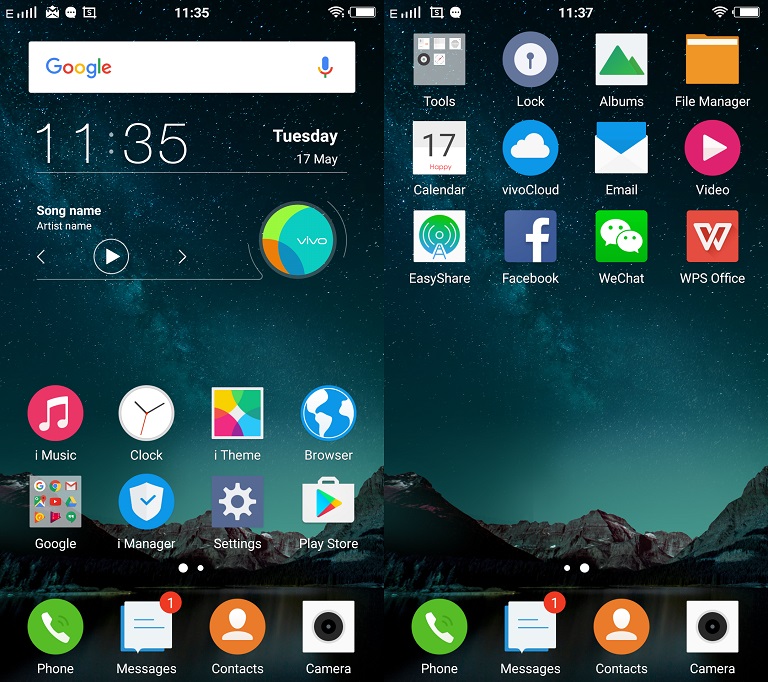 Some aspects of the UI are a bit different compared to other smartphones – swiping down will only reveal notifications. But if you need to access the shortcut keys you will need to swipe up from the bottom. Screen capture is also a bit cumbersome as the Volume Down + Power Button combination doesn’t work. You will need to pull up the shortcut keys from the bottom and press S-capture. 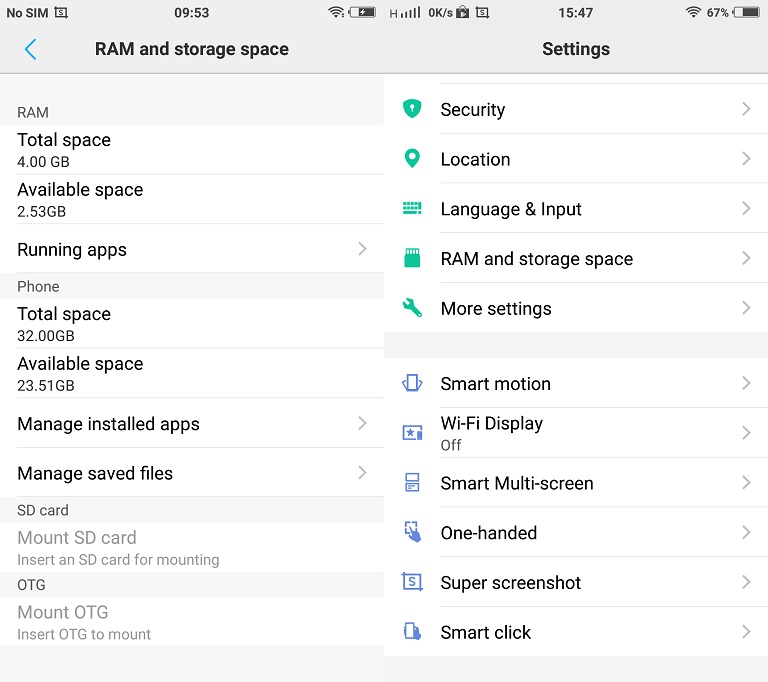 The V3 Max is loaded with some useful baked-in features as well. There’s Smart Motion which are basically gesture-based ways of launching apps, Air Operation which is similar to O+ USA’s Air Shuffle, Smart Multi-screen, One-handed operation, and Smart Click which allows you to assign an app which you can activate while the screen is off via the volume key. 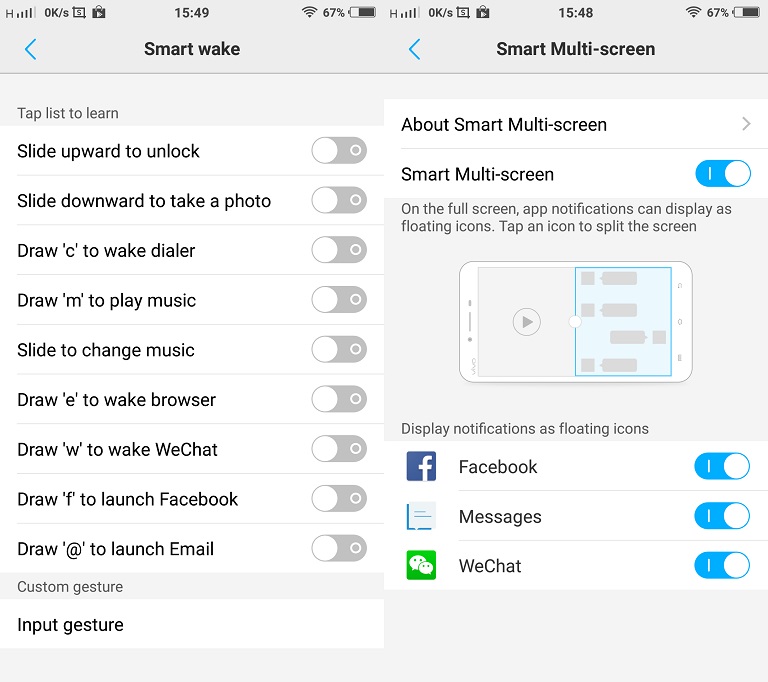 As for the apps, pre-installed ones are kept to a minimum and only features Facebook, WeChat and WPS Office, which can be uninstalled. Other than that there’s the usual Google goodies. All in all that leaves the user 23.51GB of usable space out of the 32GB.

Powering the device is Qualcomm’s Snapdragon 652 octa-core CPU clocked at 1.8GHz, Adreno 510 GPU, and 4GB RAM. That said, you can expect the V3 Max to run smoothly even if you have multiple apps running in the background. It’s fast which is good for menial tasks as well as for gaming. 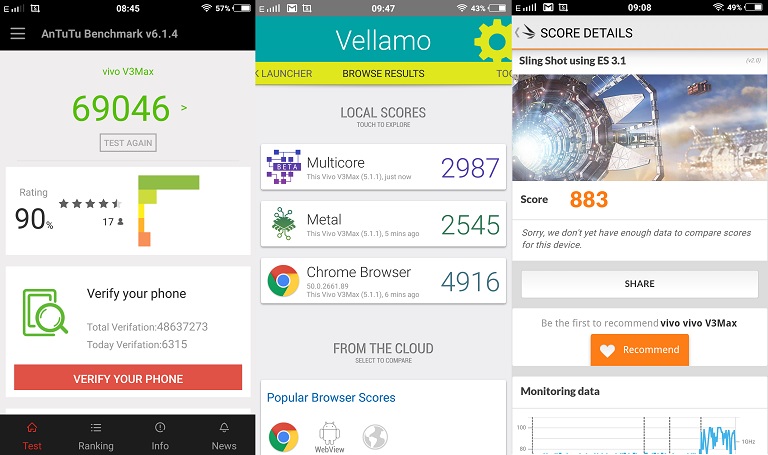 As for the benchmark, it won’t reach six-digit scores but it’s still one of the best for its class. Take a look at the results below:

As for connectivity, the V3 Max packs the basics – WiFi, Bluetooth, GPS, and Dual-SIM with LTE. If you’re looking for NFC, sad to say it doesn’t have one but it’s not a big deal either. Call quality is good as the earpiece and microphone can provide good audio.

Providing juice for the whole device is a non-removable 3,000mAh battery. Battery life is decent and can last us up to 9 to 10 hours when mostly connected via WiFi with heavy social media browsing, taking photos and shooting videos.

Using PC Mark’s battery bench, it was rated at 8 hours and 47 minutes which is not bad.

Vivo Mobile is off to a good start in the Philippines with the Vivo V3 Max. It’s well-made with premium characteristics, very capable internal specs, and not-so-demanding price tag. For Php16,990, you’ll get a smartphone with a 5.5-inch Full HD display, capable Snapdragon 652 octa-core CPU, large 4GB RAM, a starting storage of 32GB which is also expandable via microSD, 4G LTE, and fingerprint scanner. What’s left to do now is for Vivo to upgrade it to Marshmallow. Other than that, it’s all good. 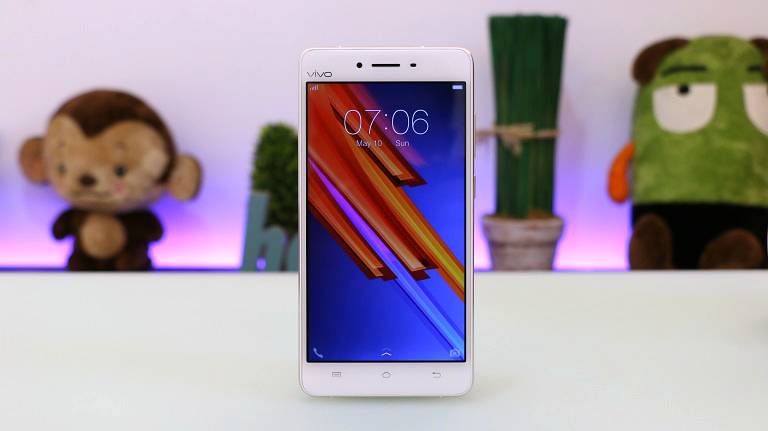 I like this phone but when they say it was a non removable battery and hybrid sim i doubt to buy this vivo v3 max.

Can someone suggest me a phone that have this traits

1 can run hd game like nba 2k17 smooth and have a sensor of gyroscope
2. at least 3000mah removable battery
3. A decent camera
4.at least android marshmallow or can update to new one.
5.Price range about 8-12k

With huawei GR5 and asus laser 5.5s having similar specs.. I can’t see how they came up with the price

don’t forget the DAC/AMP when reviewing these kinds of phones. its what makes them special.