Last year can be considered the year of selfie smartphones as brands have churned devices capable of shooting great self-portraits. The battle for the best in this category is far from over and one indication is the release of the Vivo V5 Plus with its 20MP + 8MP dual front cameras. Is the V5 Plus the selfie smartphone to get? Find out in our review. 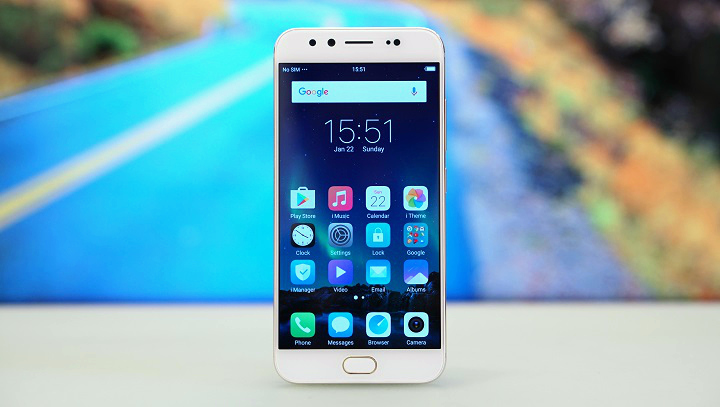 When it comes to design the Vivo V5 Plus took hints from Apple’s iPhone 7, at least, from the back. It has a white face and sports a metal unibody with curved sides with chamfered edges. 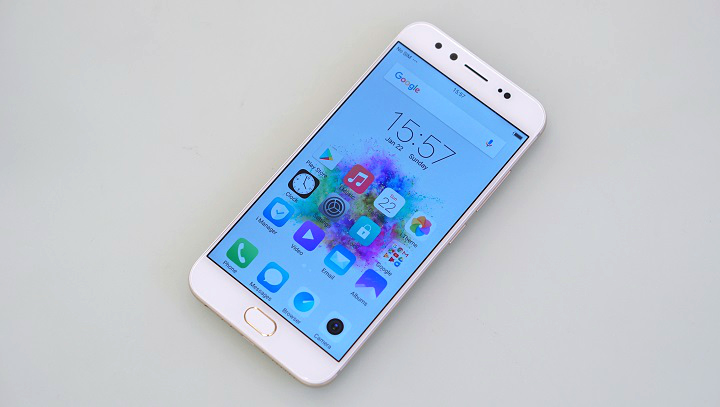 On the front, we have the 5.5-inch display with Full HD resolution, mounted with 2.5D Gorilla Glass 5. Above it are the receiver, the selfie cameras, sensors, notifications light, and LED flash. 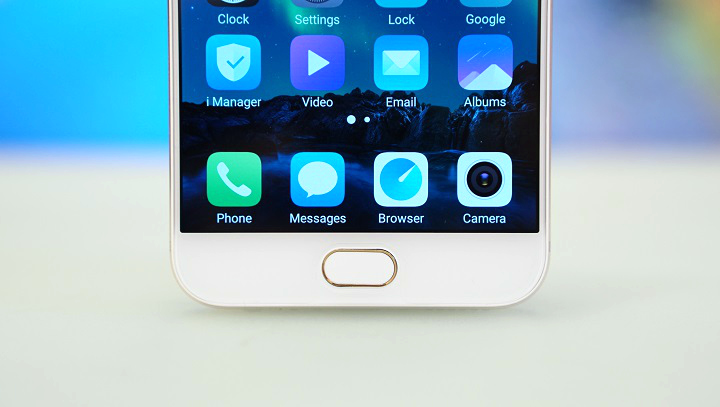 Down below are the physical/capacitive home button that also doubles as a fingerprint scanner, flanked by to lit capacitive buttons for Options and Back. 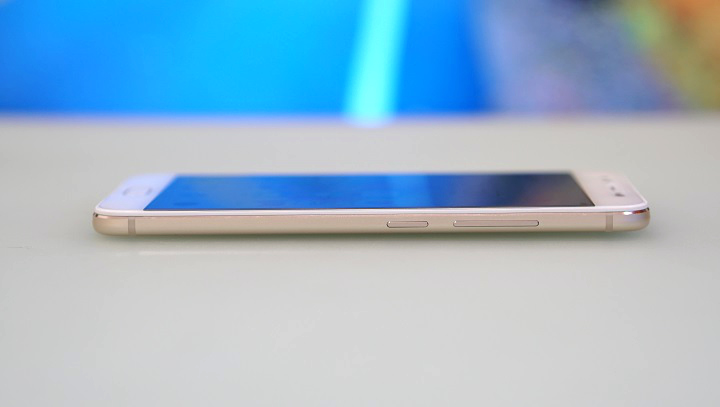 To the left, we have the SIM tray that can accommodate two nano-sized SIM cards. On the right are the power/lock and volume keys. 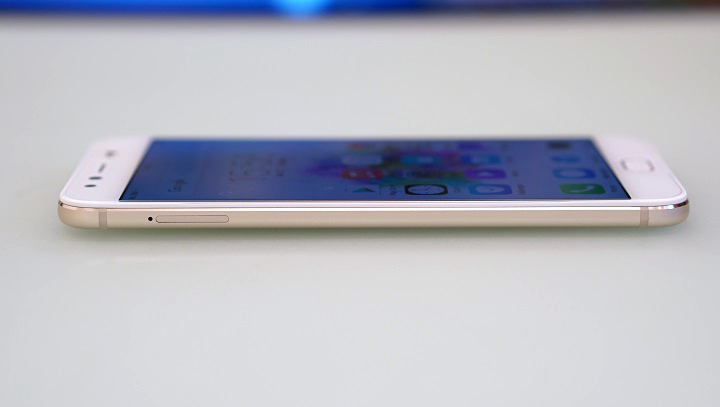 The top part is devoid of any ports or buttons, but take a peek at the bottom and you will find the headset jack, the main microphone, microUSB port, and loudspeaker. 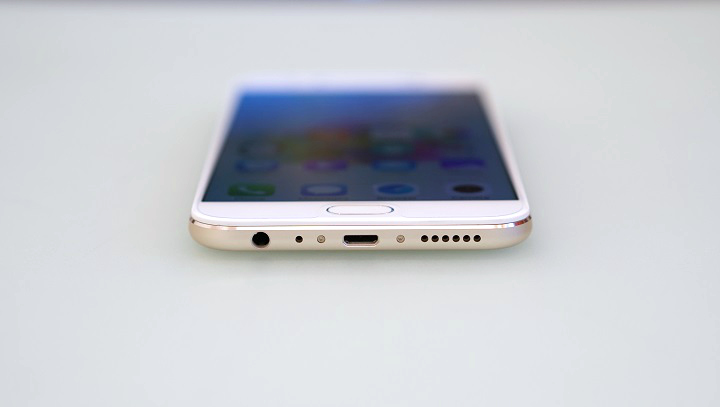 Flip it on its back and you will see the 16MP rear shooter, along with the LED flash, and Vivo branding. Also visible here are the antenna band located at the top and bottom part of the device. 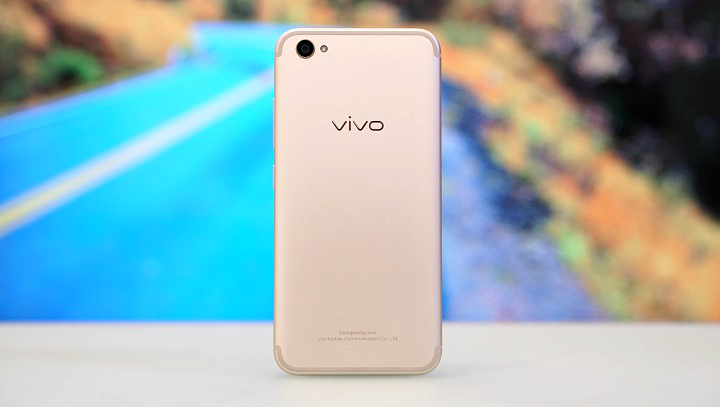 On the hands, the V5 Plus is easy to hold as it is narrow at 74mm and thin at 7.26mm. It’s also easy to grip thanks to the chamfered edges and decent heft at 158.6g. That said, you won’t have a hard time holding the device during those tricky selfies. It’s also easy to spot some similarities to the iPhone 7 when it comes to the design. Still, this adds attractiveness to the device and should satisfy those who prefer a premium smartphone with an iPhone-esque appeal.

The V5 Plus is equipped with a 5.5-inch display at full HD resolution with a pixel density of 401ppi. The bezels are thin while the screen quality is clear and crisp with nicely saturated colors. Viewing angles are also wide and can produce enough brightness for outdoor use. That said, the display is great for viewing photos and watching videos. 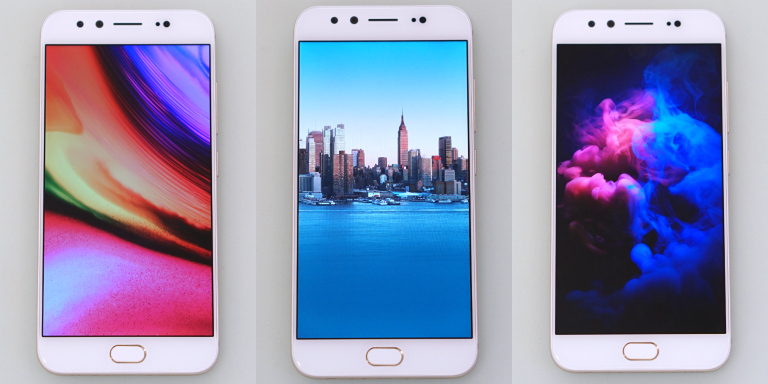 When listening to music, the sound is channeled to the down-firing loudspeaker at the bottom. There’s no stereo effect here but it’s loud and rich. Bass is weak, like with most smartphones, but you can still enjoy listening even without using headphones or an external speaker

The software department is handled by Funtouch OS 3.0 based on Android Marshmallow. It’s clean with simple yet attractive icons. There’s no app drawer here so all of your apps are accessible with a simple swipe to the neighboring home screen. 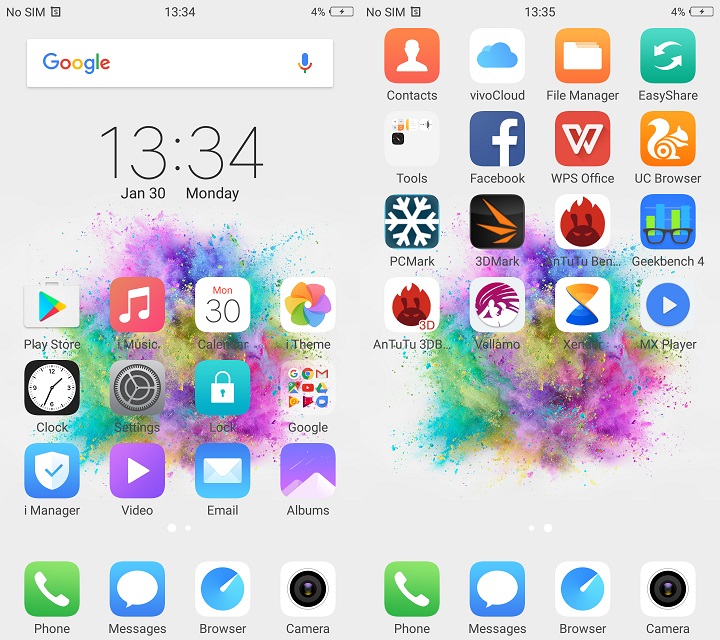 Swiping down from the top will reveal your notifications while swiping up from the bottom will reveal shortcuts. Tapping the recent apps button at the lower left will reveal, well, your most recent apps which can be cleared by a single tap. 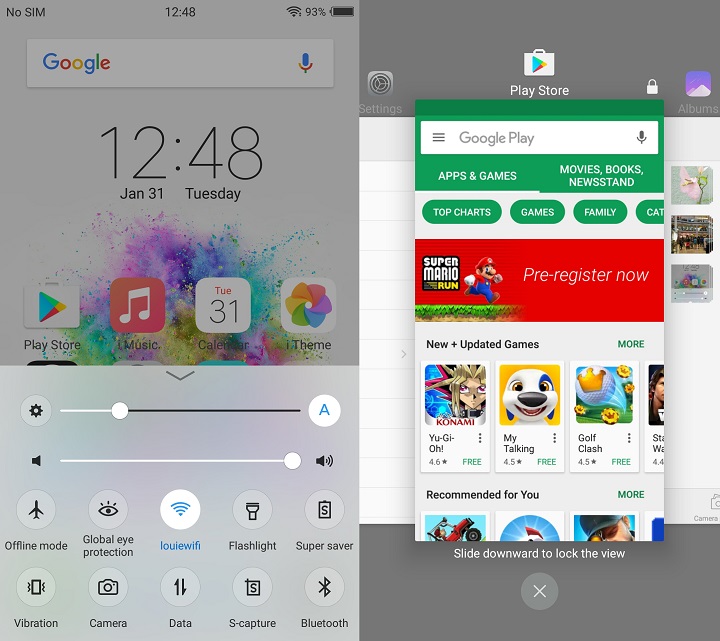 When it comes to apps, Vivo kept it to a minimum and just includes Google’s own apps, WPS Office, and UC Browser. You can uninstall some of these apps but you shouldn’t worry much about storage space as it has a 64GB capacity with 50.43GB left for the user. Unfortunately, you can’t expand it with via a microSD card as it doesn’t have a microSD card slot. Not even a hybrid setup. 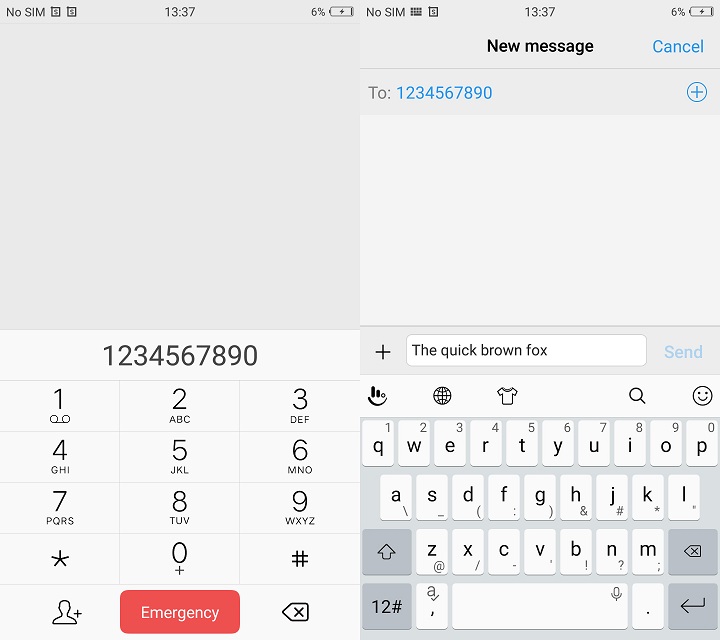 One thing we’re worried about when it comes to Vivo smartphones is their upgradeability. Their Vivo V3 Max which we have been using since March 2016 is still stuck in Android Lollipop. To their credit, Vivo has been pushing maintenance updates every now and then, but we hope the V5 Plus gets more by receiving Nougat in the future.

The camera part is where the V5 Plus shines, especially when it comes to selfies. But before we jump into that, let’s discuss the 16MP rear camera first. Although alone and has a lower resolution sensor (and protruding, by the way), the main shooter is one of the best we’ve used in this price range. It’s fast, especially in bright conditions, and can produce images that are sharp, with vibrant colors and dynamic range. Now for the star of the show. The dual front camera setup consists of a 20MP and 8MP shooters. The larger sensor does the heavy-lifting, while the 8MP helps achieve that bokeh effect or blurred background. To do that, you will need to activate the bokeh feature, tap on the subject, adjust the simulated aperture from F16 to a wide F0.95, then take the photo. The software then handles the processing to blur the background. So far, the V5 Plus was able to deliver good results, bokeh or without. The bokeh effect may not be as natural and accurate as those found in cameras with fast lenses but it’s good enough for casual users who just want to upload nicer selfies on Facebook or Instagram. As a quick tip, you make sure there’s a good distance (around 3 to 4 feet) between you and the background for better effect. Check out the samples of the front camera below:

Like with the rear camera, it also has features such as HDR and Enhanced Beautification, although you can’t use these features when using the Bokeh effect. It also has good face tracking and selfies against the light or in the dark shouldn’t be a big problem for the V5 Plus as it has a bright LED flash up front.

As for video recording, the front and rear cameras can record at a maximum of 4K resolution at 30fps. Watch the samples below:

Powering the V5 Plus is a Qualcomm Snapdragon 625 octa-core CPU clocked at 2.5GHz, Adreno 506 GPU, and 4GB RAM. The same configuration found in the ASUS Zenfone 3 ZE552KL. Performance is great as we didn’t experience any lags, crashes, or random reboots. Apps load fast, the fingerprint scanner is snappy and can handle most games out there like Mobile Legends without choking. There’s some warming that can be noticed on the top rear part near the cameras when playing games, but not enough to cause concern. Check out the benchmarks below: 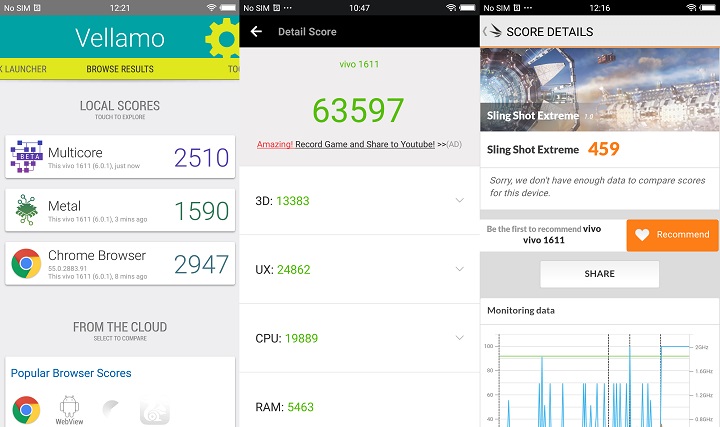 The V5 Plus is equipped with your basic connectivity features. There’s 4G LTE, WiFi, Bluetooth, GPS, and USB OTG. There’s gyroscope as well for VR and dual-SIM (nano) support. Call quality and mobile data are good as long as you’re in an area with good coverage.

As for the battery, it has a 3,160mAh non-removable battery with fast charging. It was able to last us a whole day until night time using it for heavy social-media browsing via WiFi, light calls and SMS, and frequent photography. As for our battery test using a 1080p video loop in Airplane mode at 50% brightness and volume with headset plugged in and we got 12 hours and 25 minutes of playback which is good.

Note: The PC Mark battery benchmark crashed on the V5 Plus multiple times during our test. We will update this post once we get to work.

The battle for the best selfie-centric smartphone is just heating up and the Vivo V5 Plus is a testament to that. It’s not a one-trick pony, though as it has other worthy features like the capable yet battery-efficient processor, large 4GB RAM, plenty of storage at 64GB, good rear camera, and above average battery life. 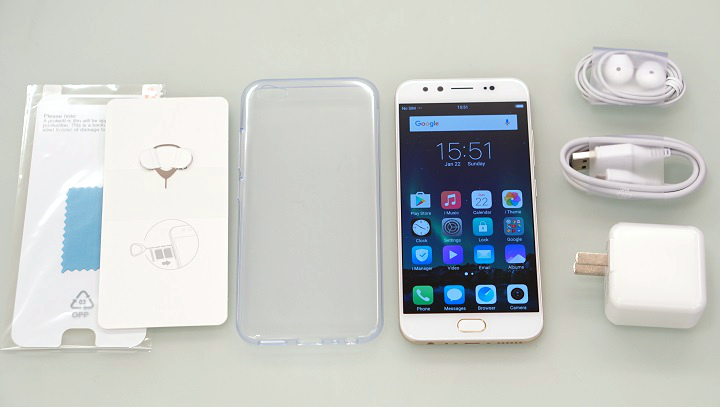 So is the Vivo V5 Plus worth getting at Php19,990? Our answer is yes, especially if you really want that bokeh effect. Although take note of one con which is the lack of microSD card support. Other than that, it’s all good.