What happens when an HTC One gets run over by a bus?

What happens when an HTC One gets run over by a bus?

So my friend has a 2013 HTC One and while she was walking the streets of Singapore yesterday, she accidentally dropped her phone. Now I’m pretty sure most of us, if not all, have experienced that argh! feeling when you drop your phone, but it gets worse. What’s that sound approaching before she even gets the chance to pick it up? A bus. 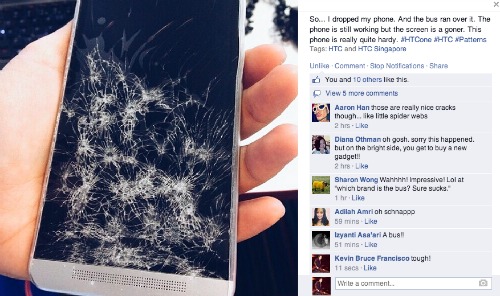 The photo above is what’s left of the phone. Unsurprisingly, the screen is all cracked up but what’s interesting is that except for the now-textured display, everything seems to be normal. What’s more interesting is she could still use it to communicate and even Instagram the photo after her friend sent her the picture. She only mentioned that the letters were a bit hard to see through the ‘patterns’ while she’s typing.

Too bad this doesn’t qualify for the HTC Advantage that replaces cracked screens for free, but at least everything else appears to be working fine. She’s yet to have her phone serviced.

After hearing the story her friends all wanted to get an HTC One.

Article Under:2013 htc one cracked display htc advantage HTC One