The device features a full HD 11.6 multi-touch IPS display and will run up to a third generation Ivy Bridge Intel Core processor with integrated graphics & Windows 8. This tablet is no joke as it packs 8GB of DDR3 RAM, a 256GB mSATA SSD and a 4000mAh battery – all at the cost of 1 kg. 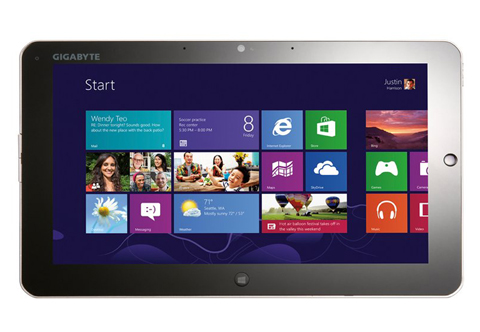 The S1185 packs a lot of connectivity options; it is equipped with one USB 2.0 & one USB 3.0 port, VGA output, an HDMI interface and a built-in microSD card slot. It features a lot of radios as well, including Wireless LAN 802.11n, Bluetooth 4.0 and a SIM card slot for 3.5G.

The tablet has more tricks up its sleeve as it comes with integrated mouse buttons and an optical finger navigation sensor located at the sides for a desktop-like experience.

A keyboard dock will be sold separately as well. With that said, the Gigabyte S1185 might come around in March for more or less Php 40,000.