3 Ways to Refresh an Old Laptop

3 Ways to Refresh an Old Laptop 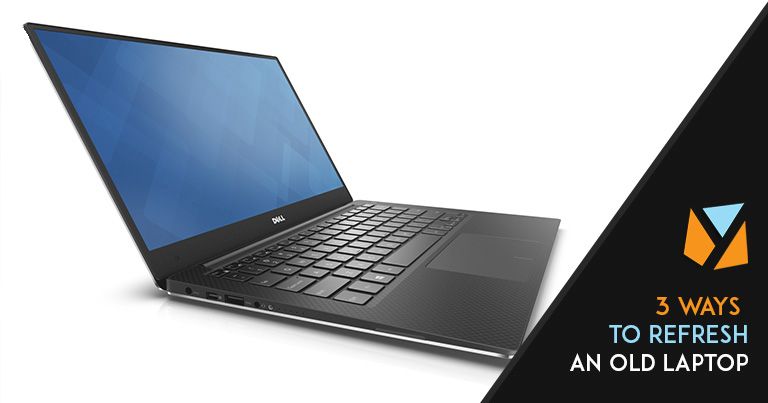 Is your laptop becoming slow? Are you somewhat annoyed with the delay? Well, unlike PCs, laptops are a tad more difficult to handle. Due to its compact and portable design, laptops are trickier to clean, mod, and the like.

In this guide, we will be refraining from “advanced” techniques such as using CMD and other Windows built-in functions for cleaning, and we’ll also be refraining from the typical “Reformat” solution that most people do when trying to clean a PC/Laptop. Reformatting isn’t really the best solution as it removes everything and sometimes the problem could be a hardware issue and/or a bios issue. This guide is also applicable to PCs as well.

Here in this guide, we’ll show you 3 ways on how to refresh your laptop the quick and easy way by simply checking, installing, and removing unwanted software/apps. Take note that this is not a tutorial nor a step-by-step guide on using the software and other parts.

One of the easiest ways to clean a PC/Laptop is by installing utility software that does the work. Software such as Revo Uninstaller, CCleaner, and shredders are great for maintaining the overall health of the laptop. Below we have listed software that you should check out. We didn’t include Comodo PC Tuneup, AVG PC Tuneup, and the like since they’re not free.

arguably the most well known free optimizing software that we have today. CCleaner makes up its reputation thanks to its efficient performance, numerous cleaning and optimizing features, and apart from that the customer service of Piriform is excellent. CCleaner also has consistent updates and is FREE which adds to its remarkable reputation. 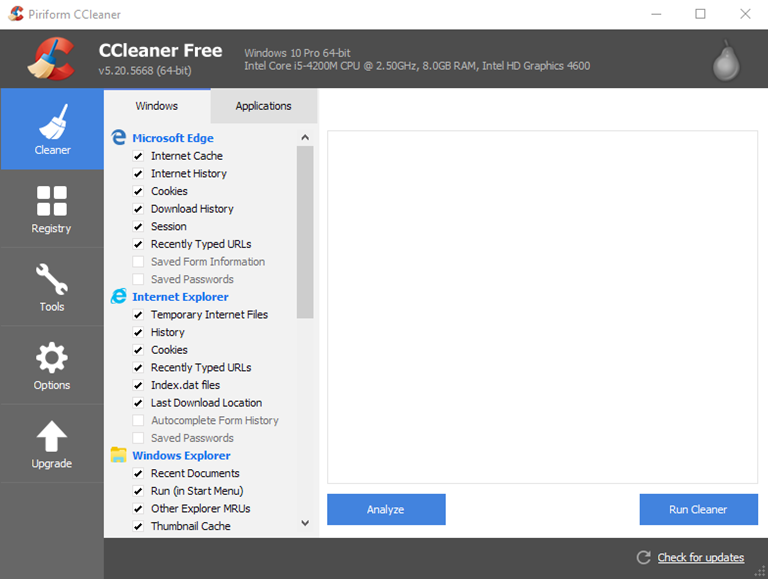 The main focus of CCleaner is to remove “built-up” junk on your PC. Remember, deleting files in your recycle bin doesn’t entirely delete them at all. This is where CCleaner comes in. Thanks to its simple UI, you could easily choose and select which programs (windows or not), that you’d like to clean. Asides from cleaning the recycle bin, CCleaner can also clean browsers, game software, and other unwanted junk that builds up over time.

A plus for CCleaner is its registry cleaner and startup controls. A definite must have for any PC/Laptop.

Revo is one of the most underrated Utility Softwares out there in the market today. Asides from being free (with a professional option), it provides one of the complete utility software tools today. 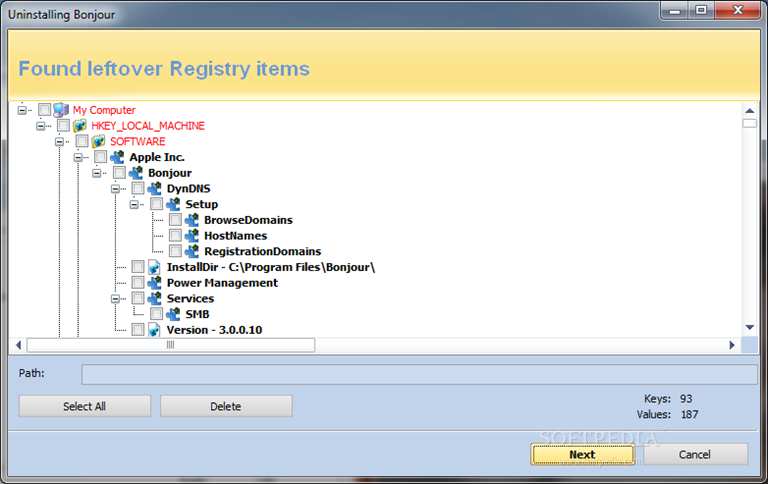 The main function of Revo (as it states) is uninstalling software. Unlike the traditional windows uninstaller, Revo thoroughly searches for remaining files in the drive and remaining data in the registry. In most cases, the software that you installed is not fully deleted and requires you to search your disk and registry to make sure that it is completely removed. Some software informs you that they need a restart, and some tell you that you manually need to remove the files, but most of the software today don’t tell you that you need to remove the remaining files from the system. Thus causing more used up space on unwanted apps/programs.

Asides from the main thorough uninstalling feature of Revo, it comes complete with a junk file cleaner,program start-up list, and a wipe free space option. We highly recommend this software.

Most people underestimate the power of defragmentation. As time passes by, you will surely add and remove files, software, games, and that itself adds pressure to the hard drive and Windows. How is that? Well to make things short, just imagine you’re in your new office and the first thing that you bought was a PC. As time goes by you’ve bought several PCs and other things but at the same time, you’ve also removed some. In the process of adding and removing files in your office, you’ll notice that things can get disorganized. This is the same for PCs. 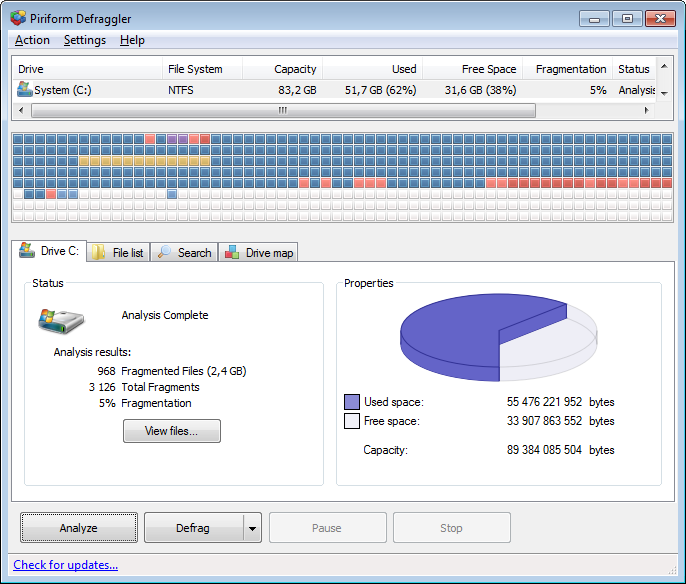 Adding and removing software adds pressure by creating unwanted junk, and leaving those whom you thought are removed but are not. That’s why defragmentation is important. Here we chose another one of Piriform’s famous software – Defraggler.

Not only does Defraggler optimize your PC/Laptop by sorting out files, it also shows the current state of your HDD/SSD/SSHD and the estimated life of it. Just take note that, while there are some speculations on whether SSDs should be defragged or not, in my case since SSDs in the past are less stable its better not to defrag them. Remember unlike other PC components, HDDs and SSDs degrade over time faster than others.

This is the tricky part for laptops. Unlike PCs, laptops are (as what I’ve said above) compact. Thus their components are more difficult to assemble or disassemble. This step is only useful if your laptop is somewhat modular and if you’re confident enough in opening and fixing the laptop yourself.

Of course, as time goes by, dirt and dust is a big factor in degrading component health. All of the laptops have fans and heatsinks/spreaders, thus you should expect every now and then that there must be some sort of dust/dirt build up inside especially if you use it all of the time.

This doesn’t entirely affect the performance directly as a whole, but will degrade component life in the long run. Aside from that, it will also complicate cooling issues thus having higher temperatures and will throttle down performance thanks to thermal throttling (a CPU/GPUs natural defense mechanism to lower down efficiency to combat temperature rises).

There are numerous guides on how to clean laptop parts step by step. We have provided one below.

Take note that we are not responsible if there are any unwanted incidents that happen whilst cleaning your laptop.

The easiest and simplest solution for making Laptops/PCs faster is removing files/apps. While most would disagree that the content of the hard drive rarely affects overall performance, that is somewhat not entirely true.

The amount of space you have doesn’t define the entire performance you’ll receive, but it does affect other factors as well. Especially if you have an old/lower end laptop. How is that so?

Well, the standard for today’s HDD speeds is at least 7200RPM. Older laptops and hard drives are around 5400RPM or even slower. This affects the overall reading process. If you have a ton of unwanted/junk files, it is more likely to put more strain on lower end laptops with slower speeds rather than those who are newer and faster. Also take note that deleting files in the recycle bin (as mentioned above), doesn’t entirely remove the file.

This can be countered by CCleaner and other apps, but could also be countered by shredders. A shredding software is built for one purpose — shredding. If you just empty a recycle bin, not all of the files are permanently deleted. Using software such as Recuva can, and most likely will, recover that file. For shredders, however, this isn’t the case. Unlike deleting the file and sending it to the recycle bin, shredding the file will remove it from its source.

Below are examples of shredder software:

All of these shredders are once used by us, and personally, my favorite is Eraser and DP Wipe.

We all hate lag and delay of our PCs/Laptops. This is why we made this guide to help you have an idea on ways on how to refresh it as much as possible.

Reformatting is a good option but not necessary. Just because your laptop/PC is slow, it doesn’t mean it has to be wiped out. You could save an ample amount of time by simply running some diagnostics and manually cleaning your laptop. Who knows? Maybe the reason why your computer is starting to slow down is because of several startup programs? Then the easiest and fastest way of curing that is simply by removing those startup programs.

We hope that this guide helps in giving you an idea on how to optimize that laptop of yours and if you have any questions feel free to comment below.