Officially unveiled back in January, the Intel Compute Stick is tiny Windows-powered device that can fit right inside your pocket. It features an Intel Atom processor, 2GB RAM, and runs Windows 8.1 OS out of the box. It’s a portable and affordable solution for those who want to turn any HDMI-equipped display into a full-fledged PC. Is the Intel Compute Stick worth getting? Find out by reading our quick review. 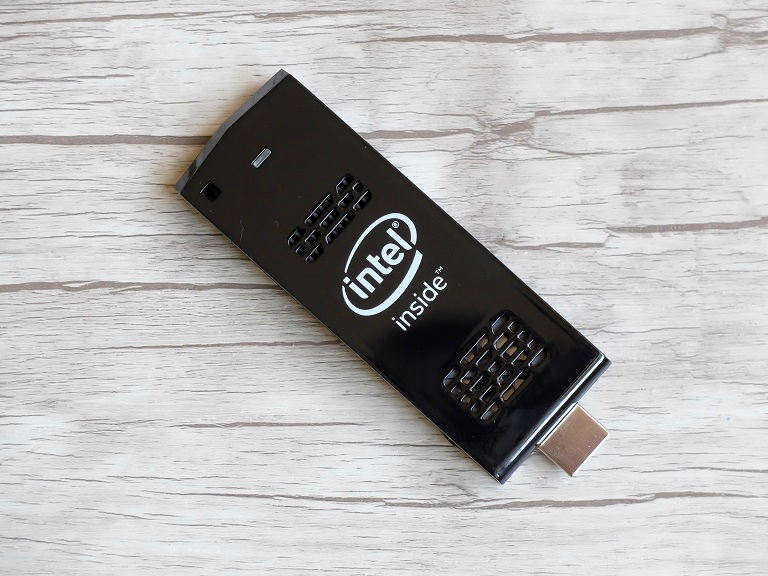 The Intel Compute Stick is a candy bar-shaped device that comes in a plastic body. The size reminds us of a small remote rather than a thumb drive. The front houses the LED, a couple of vents, and the Intel inside logo. 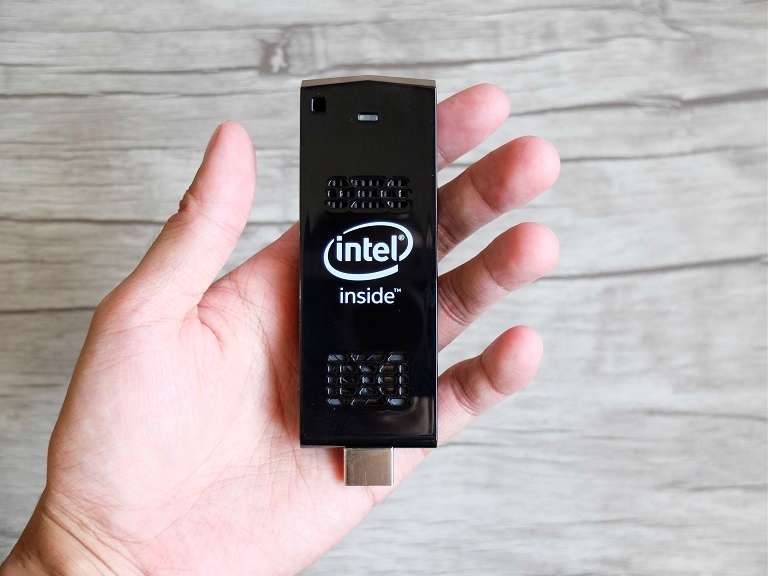 On the left we have the security notch, regular-sized USB 2.0 port, microUSB power port, another vent, and the power button. While on the right side is the microSD card slot and another vent. At the bottom we have the full-sized HDMI allowing you to connect it to a TV or monitor. 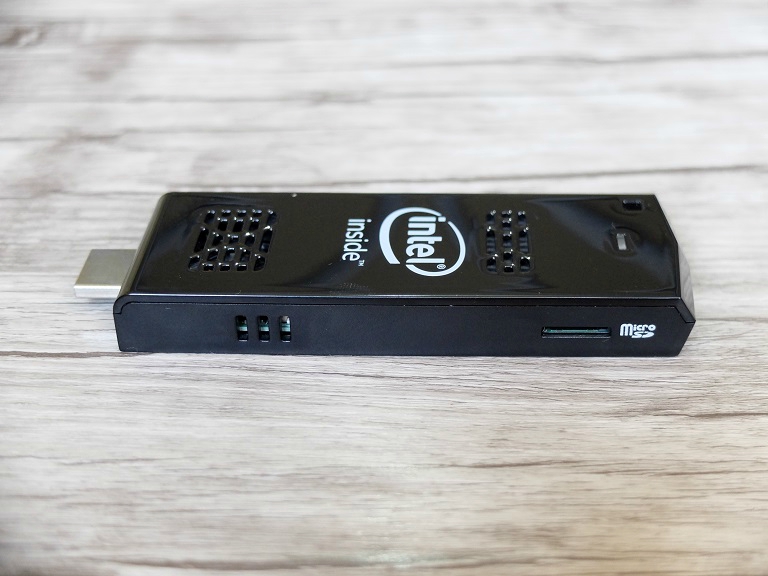 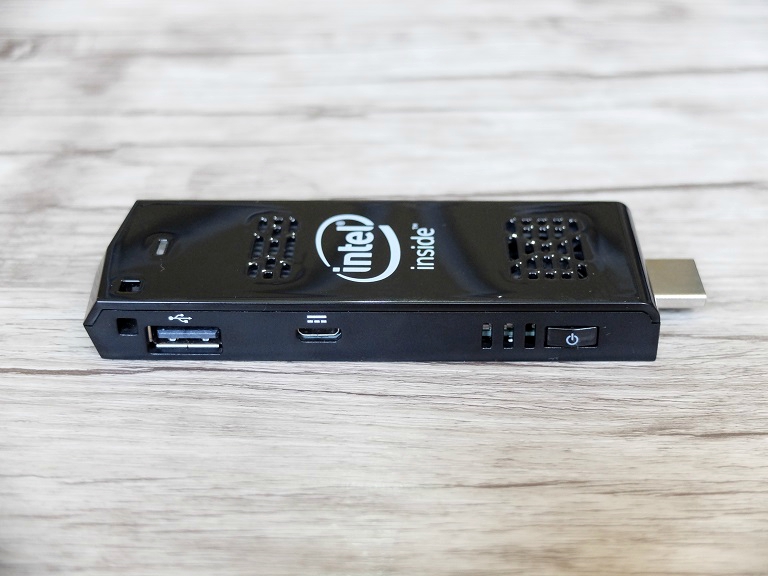 On hand, the Compute Stick is surprisingly light, however, it makes us wonder if its sturdy enough to withstand accidental drops or when not securely stored around with other gadgets.

Setting up is easy and straight-forward. Just connect the Compute Stick to the HDMI-equipped TV or monitor, then connect the device to its power adapter via the microUSB port then switch it on. Of course, to use the Compute Stick as a regular PC, you will need a keyboard and a mouse. But since the Stick only has one USB port you will need a special type of wireless keyboard and pointer that can be used via a single USB receiver. In our case, we used the Logitech k400r wireless touch keyboard. But if you have multi-port USB hub you can use that as well to connect more USB devices. 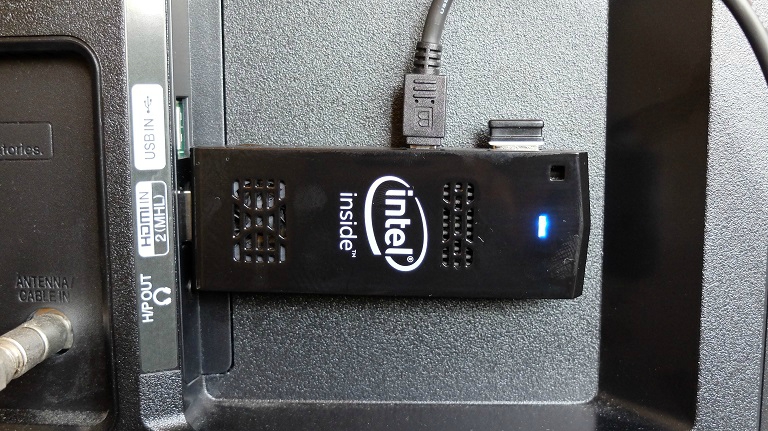 Once you have that configured, you can now setup and use Windows 8.1 OS which you can then upgrade to Windows 10. The OS doesn’t come with a lot of pre-installed apps which is good considering you only have a limited amount of internal storage. 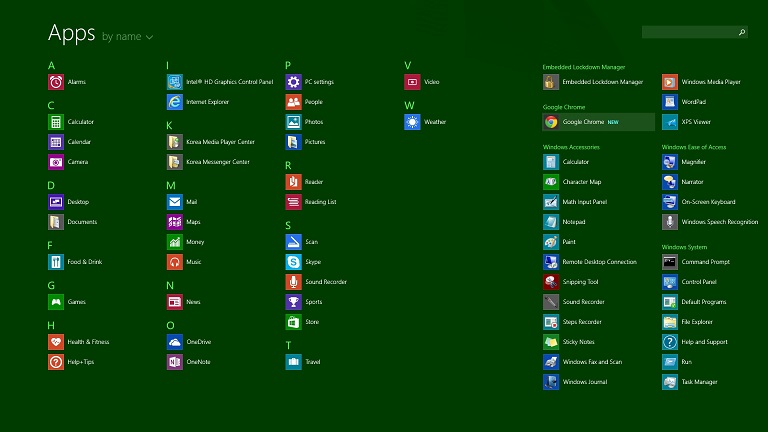 The Compute Stick has 32GB internal storage but out of the box we have 17.6GB free. It feels very limited but pretty understandable considering that it’s just a pocket PC. Considering its hardware configuration we don’t expect you to do heavy tasks on it other than Office docs and web surfing. Speaking of Office, the Compute Stick doesn’t come with free Office programs so you will have to install it yourself.

The Compute Stick is powered by a 1.83GHz Intel Atom Z3735F quad-core processor, Intel HD Graphics, and 2GB RAM. It boots up fast and has no problems running programs like Chrome and media players of our choice. The microSD card slot is handy if we want to view media files from our smartphone. However, don’t expect it to be portable gaming PC though as the hardware is not powerful enough. As mentioned earlier, it’s good for office work and web browsing.

The Intel Compute Stick is a great portable productivity PC as it is light, pocket-friendly, and easy to set up. There are limitations though like the limited USB port and internal storage. It’s good in certain scenarios though like turning your spare HDMI-equipped monitor into a fully functional PC, or attach it to your hotel room’s TV and use it as a PC as well. And one of the best part is it only costs Php7,999 so it’s not going to burn holes in your pockets. What we liked about it:
* Portable and light
* Full Windows functionality
* Powerful enough for office productivity