OCZ has recently released its latest entry-level Solid-State Drive the ARC 100 which comes in three storage capacities and is primarily geared towards upgraders who want to have a taste of SSD’s blazing fast speed without breaking the bank. A lot of tech websites from other countries have been fortunate enough to get an early look of this new SSD which has so far garnered positive remarks from critics. It’s a tad slower compared to other high-end SSDs like SanDisk Extreme PRO and Samsung 840 EVO, but it makes up for that with its competitive price tag. 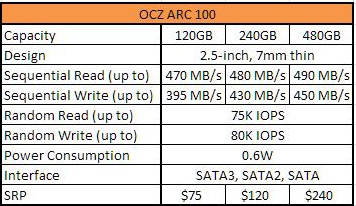 According to official press release, the new OCZ ARC 100 will be available globally in the next coming weeks.