In addition to Smart, Sun Cellular also announced that they’ve added the newly-launched Cherry Mobile One to their roster and will be offered with a minimal cash-out under of just Php500 the Sun Plan 399. 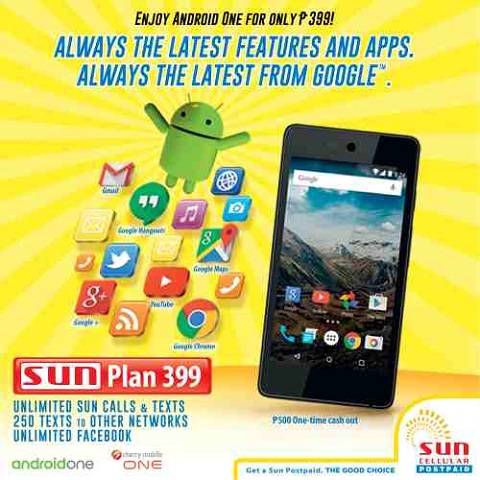 The Sun Cellular Plan 399 comes with unlimited Sun-to-Sun voice calls and SMS, additional 250 SMS to other networks and free round-the-clock access to Facebook.

As part of the Android One initiative, subscribers will get 200MB worth of data allocation which can be used to download apps on Google Play Store, as well as an additional 100MB worth of data for the first six months (upon activation) for software updates from Google.

Smart Communications also announced that they will be carrying the Cherry Mobile One which can be had by signing up for Plan 499 and All-In Plan 500.