Due to rampant incidents of load sharing scams, both Smart and Globe have changed the way they operate sharing of eLoads. Majority of text scams deceive subscribers into claiming free credits but inputting and replying to specific SMS queries.

Globe started making restrictions in their Share-a-Load services several weeks ago (first time we experienced this was September 1). The new scheme requires confirmation that a load is being shared and requires another affirmative answer to validate it. 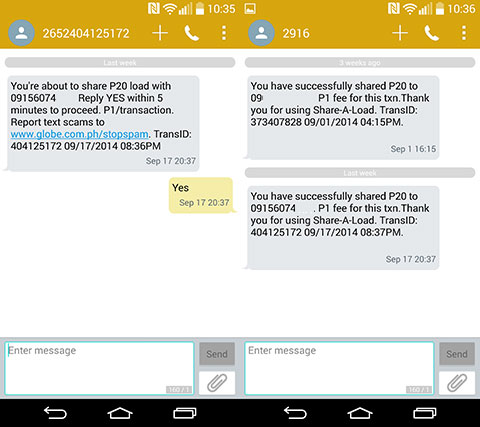 Globe has also limited the amount of sharing to just Php300 and has removed the Php500 option (which is the usual and maximum amount used by text scammers). They explained this in Globe’s updated FAQ:

P500 is the most commonly used amount of Share-A-Load scammers. You have probably received a text message from an unknown number asking you to send Php500 to a number starting with 2 instead of the usual 0 (e.g. 2917xxxxxxx). Doing this (for instance, sending Php500 to 2917xxxxxxx) will send P500 to that number. Making the P500 denomination unavailable, helps protect you from being victimized by these scammers.

Note that the P300 denomination is available to Globe Postpaid customers only. Also, effective August 9, 2014, the P500 denomination via Share-A-Load will be temporarily unavailable until further notice. You can use other denomination such as P1- P150 or P300.

For prepaid, the maximum load amount per transaction is Php150. The SMS confirmation needs to be responded to within 5 minutes in order for it to be validated.

Smart has also followed suit and released an infographic about it today:

Introducing the new and safer way to send Smart load! Remember and share these steps to be protected from text scams. pic.twitter.com/hThsaTt08Q

Smart’s website was not updated if there were changes in the maximum amount that they can do for Pasaload.

Both Smart and Globe have made significant changes to the way they processes loading sharing via SMS. Biggest of them would be the text confirmation. In Globe’s case though, legitimate subscribers would have a harder time if they want to send out bigger denominations (like having to share Php300 and Php200 separately and pay Php2 charge instead of Php1).

At least, both telcos are acknowledging the rampant problem of text scams. The solutions may be crude and simple, something that will not really solve the problem complete, but it’s a start.