Now that two giant telcos in the country has announced the availability of the Samsung Galaxy S4, we thought of giving you a better look at Smart and Globe’s postpaid offerings to help you decide if ever you’re interested in getting one. 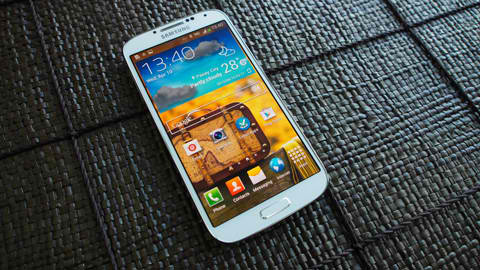 Smart has pretty much kept the same pricing scheme that they have when they first offered the iPhone 5. The difference between the 16GB iPhone 5 and the Galaxy S4 in all of the available postpaid plans is just less than Php100. Here’s look at Smart’s Samsung Galaxy S4 Postpaid offering: 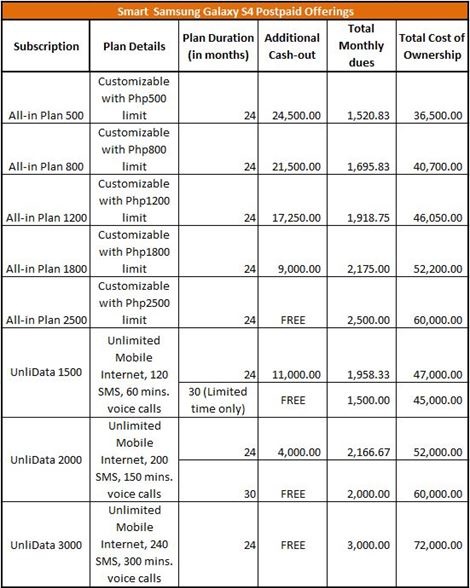 Now let’s look Globe’s which has gone a bit creative with their proposition than Smart. Apart from offering the flagship handset on different postpaid plans, Globe has also added different lock-in periods which make it easier for potential customers to choose the duration of their subscription. Here’s a look at Globe’s SGS4 deals: 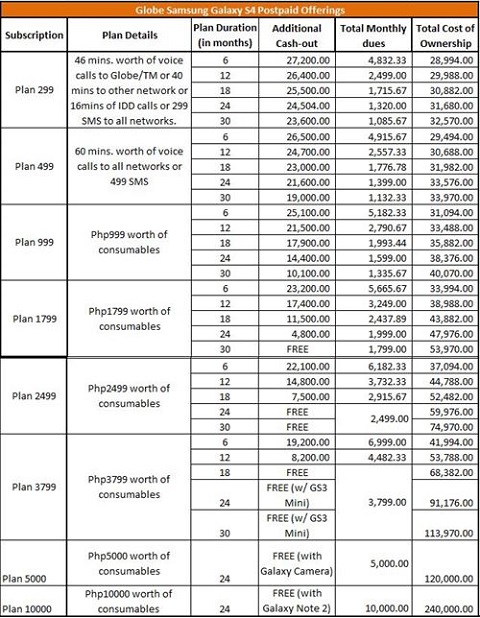 To give you a better comparison of the two telcos’ offerings, we picked three almost-identically-priced postpaid plans and placed them side-by-side to see which has the more affordable offer. Here’s what we got: 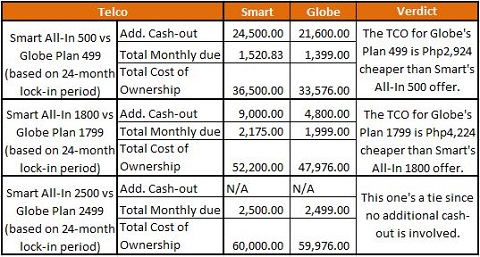 As we’ve mentioned on our “Ultimate iPhone 5 Postpaid Shopping Guide”, choosing the right postpaid plans for you really depends on your needs as a user.

“Smart offers generous free minutes and free SMS for a number of their plans where the total value is often times higher than the MSF itself. This helps you maximize your use of their network.

On the other hand, Globe offers consumable amounts as a percentage of the MSF. They also offer some freebies depending on the plan (more attractive as the plan goes up).

If you already know your average monthly consumption with call minutes and SMS, Smart’s plan will give you more mileage.

If you are unsure about your usage pattern, Globe’s consumable gives you that flexibility to reallocate credits to other services.”

From what we’ve gathered so far, it seems that Globe’s got the better of Smart in terms of its SGS4 pricing. But not only is Globe’s offers are more affordable, we also liked the introduction of various lock-in periods which we think a lot of subscribers will like. How about you guys? What do you of Globe and Smart’s Samsung Galaxy S4 postpaid plans offer?