A few people would want powerful Bluetooth speakers, but most speakers out there are massive in size, making it not ideal for users who are on the go. Enter Samsung’s BS300, which is a pocket-friendly bluetooth device. We go hands-on, so read on to find out what we think about it. When we first saw the casing, we thought that it was gonna be a huge gadget. Turns out it was something that could easily fit in your pocket. But enough with the rhyming, and get to the the unboxing.

We had a hard time getting started with the BS300, from taking it off the casing to pairing it with a device through Bluetooth, so we figured we’d make a short video since we almost broke the transparent packaging at first.

After reading the manual, you’re pretty much good to go because if you didn’t read it, you’re going to have a hard time. The manual’s very short and it only looks long because it ranges in many languages. After that, pairing and all – operation is a breeze. 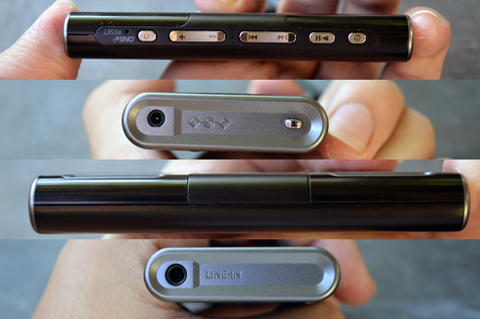 On top are the controls – volume, power, playback and DNSe (Digital Natural Sound engine), which is Samsung’s take on surround sound. On the back are labels, while on the sides you’ll find the port for charging, line-in and a place to put accessories. Up front are air holes, the speakers, the mic & the button for taking calls.

In practice, the sound is significantly louder than your smartphone or your tablet. It can’t match larger sized speakers, but it’s enough to fill a small room with decent volume. Quality on the other hand is subpar; it doesn’t deliver clear bass tones, and trebles create quite a hiss. It’s in the mids where the BS300 succeeds for the most part, and it does get the job done with audio that involves voice – podcasts, vocal-rich songs and the like. The microphone reminds us of other Samsung devices, especially since we have a few Galaxy phones still with us. It captures clear audio for the most part, but it isn’t as sharp and as accurate as you’d expect. We used the microphone in recording the voice-over on our unboxing video, so check that out.

We kept the BS300 playing songs over Bluetooth on maximum volume. From a full charge, the blue LED light (good battery) didn’t even turn red (low battery) for two hours. However, at that time frame, there was an obvious degrade in quality already.

Samsung’s rated 4 hour use may come very accurate on this one, although like we’ve said, quality turns bad halfway. Expect slightly better battery life when using a wired connection. 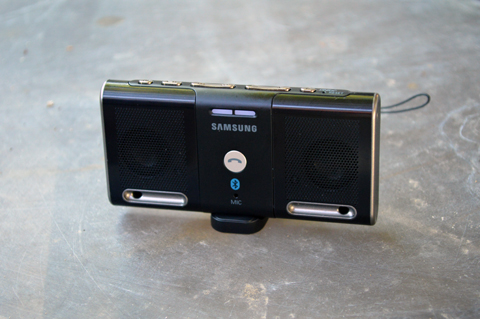 It’s a little hard to look at especially because of its size and its limitations in power, but if you take a minute to consider it, it’ll get you thinking. If you need great speakers that fit in your pocket, the Samsung BS300 is exactly that. Widget City has it selling it for a price of Php1,500 (see listing here).