The year 2010 is closing in and looking back in the last twelve months, there were tons of new products introduced this year. I’ve got my line of favorite gadgets this year but I also like to get my readers opinion which are the best products were introduced in 2010.

From notebooks to cellphones and other tech toys, there’s just too many to choose from and the contenders are pretty competitive too. 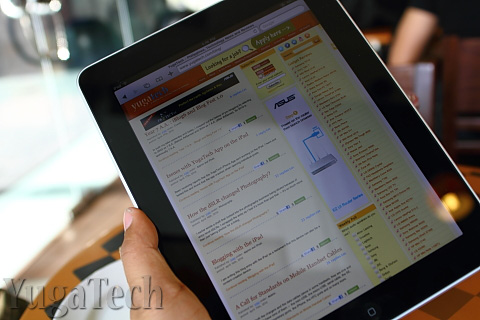 Apple introduced a slew of new devices — from the iPhone 4 to the iPad and the latest Macbook Air.

The year 2010 can be considered the year of the Android with HTC, Samsung, Sony-Ericsson and LG bringing in more than a dozen Android smartphones combined.

Tablets also came into the scene with the Galaxy Tab trying to steal the thunder of Apple’s iPad. Archos brought in more affordable models while local brands like Cherry Mobile and RedFox joining the fray. That doesn’t include a host of other China-made iPa-wannabe Android tablets.

There’s also the LED TV and the 3D TVs — pretty expensive but pretty cool too. Digital camera have made their mark too with Canon, Nikon and Panasonic slugging it out.

In the game consoles, I’ll have to hand it over to Kinect. Don’t think there’s anything more fun to play with sine the Nintendo Wii was first introduced.

So let’s put this to a vote. What are the best gadgets that’s been introduced in 2010? Please leave your vote in the comment section below and try to limit your nominations to a maximum of 5 specific models.

Hey there, You have done an excellent job. I’ll certainly digg it and individually suggest to my friends. I’m sure they’ll be benefited from this web site.

Hi friend. I am still really noob at blogging and the entire aspects around this field. There are lots of jargons I still canâ€™t know. Iâ€™m not even sure I can write half decent to yours. I will read the whole site maybe I will be able to grasp your blogging style a little.

Seems like iPhone4 is really on top of the ladder. I was actually thinking of buying one but it doesn’t have flash player. Is there a cure on this already or should I go for an Android instead? If yes, what’s the best Android phone to get?

My top gadgets for 2010:
(i personally own and use everyday)
1. NOKIA 1280 = Best fon. Everyday use for texting and calling, plus a flashlight and an fm reciever. No worries sa mga snatchers, not an eye candy but very much usefull for practical needs.

3. NIKON D40 = Best Camera. Compact and easy to use. Still out best some of the new generations of DSLR’s.

4. SMARTBRO POSTPAID kit = Best 3g gadget. Usable where ever i got a need to check my mails and facebook. I tried tattoo and sun broadband, but smartbro still edge out other network due to availability and reliability of smart network, especially in province areas.

5. SONY VAIO VPCEB36GM = Best Laptop. Internet, office works, gaming and other stuff. A very reliable laptop for my everyday use.

6. Acer aspire one D250 = Best netbook. Portability is number one.

7. WD my passport external HD 1gb = stores all media i have.

My gadgets maybe outdated, but practically up to date on everyday needs.

it’s my first time to join here… just wanna comment on my favorite gadgets of 2010..
1.iPad
2. Sony Alpha NEX-5– an APS-C sized sensor in a very small body!
3.Windows Phone 7 Devices (HTC HD7 is my favorite!)
4. Android devices, especially those running 2.2(Froyo)like Desire HD
5. iPod Touch(latest gen.)- dubbed as the iPhone w/o a phone… why do you have to buy an iPhone 4, just have a nokia 1208+iPod Touch!haha!

i don’t have any of these, but i’d love to have them all… especially no. 2

Video chats/calls over the network can now be done on iOS.

Pretty much for the mobil filipino. Not just for the stunning appearance but for need and comfort.

By far I do think the iPad is it. After that is the iPhone 4

innovative: (not necessarily a gadget)

now, the best gadget for me based on their ‘perceived’ worth/pakinabang bec. i don’t own any:

n900 – most hackable, can dual-booth.
galaxy s – high poly count, and of course, super amoled.
iphone 4 – introduction of gyroscope on smartphones. I don’t prefer this personally, and for me, it doesn’t bring any additional uses that can blow me away. But for the charm it has, and ease of use it boast, i will give it credit. I’m more leaning on ipod touch actually(why it’s cheap!).
samsung wave – almost the same hardware as galaxy S, but cheaper. The OS, however, hold it back a little.

I really like to add 3ds, but it’s not released yet. I saved all my money just to buy my next handheld console, i’m almost swayed to itouch until i realised no one does it better than sony and nintendo with their dedicated consoles. But if someone has an extra ipodtouch there, you can send it to me, i will happily accept it. :)

And why hurry, when dual-cores are just a few months away? 2010 gadgets will be extremely outdated when that time comes. I’m excited at CES and MWC announcements. How i wish one tech blog from our country can do a coverage there.

i guess almost everybody have same thoughts on what are/were the best gadgets in 2010. this year was really one hell of a ride in technology.

Hi Abe, how about another question…
What do we foresee as the gadgets to look out for in 2011? Especially for those who held back from spending this 2010.
iPad2 is an obvious, as well as BB Playbook.