Are you ready for an iPhone that has a wraparound display, face-recognizing sensors, optically-transparent glass, and no physical buttons at all? Well, after Apple has been granted these patents just recently, seeing them in the future is a big possibility. 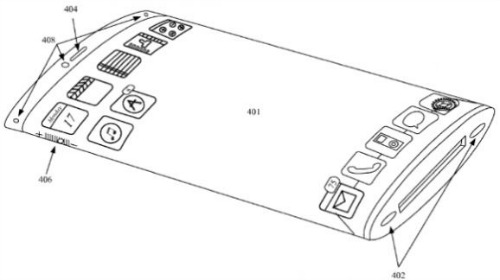 Reports say that the company might use a flexible AMOLED display together with an optically-transparent glass to form the new iPhone design. This curved form factor (aside from looking like a dessert packaging from Jollibee) now allows one more app icon to squeeze in, resulting to a total of five icons as opposed to the original four in each row.

Physical buttons may no longer make its appearance in the new design. The patent indicates that the embedded volume control (406 on the image) could be seen anytime and could be adjusted by first holding a finger on it. Once held, the volume control ‘drops down’ and expands to the entire left side of the device — kind of similar to iOS’ video scrubbing feature on video playback.

A physical Hold button popularly seen in iPods for locking and unlocking the screen may also be translated to a multi-touch gesture along the sides.

The patent also notes that the new design may use multiple cameras to capture the user’s face and use an integrated facial-recognition software to determine where his field of vision is; thus making the iPhone adjust its visual presentations to be perceived by the user effectively.

It doesn’t look like we’ll be seeing these any time soon. According to TechRadar it could even be as far as iPhone 9 or so that these new features will be available, but no one really knows for certain. For now let’s just be happy for Apple that their 2011-filed patents are now a go.