We arrived today here in Singapore to attend the launching of HTC’s Windows Phone 8 handsets as well as the upgraded HTC One X+. We managed to visit an Apple reseller store at the Changi airport to buy us an iPad Mini.

Unfortunately, all the stocks are out after they started selling the units at 8AM in the morning (we arrived around 12 noon). They even limited the purchase to one unit per customer but there was just a lot of demand for the iPad Mini. 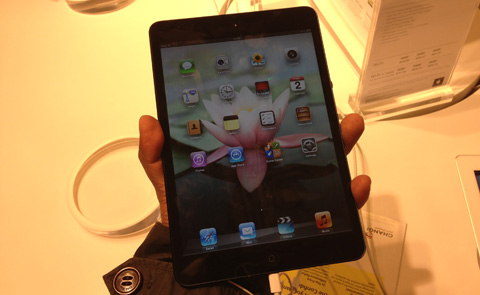 There were two remaining demo units in the shop so we took some time to try it out, takes some photos and videos and pay with it for a while. We bought the 5th-generation iPod Touch a couple of weeks ago and our first impression was very similar to that, just a tad bigger. 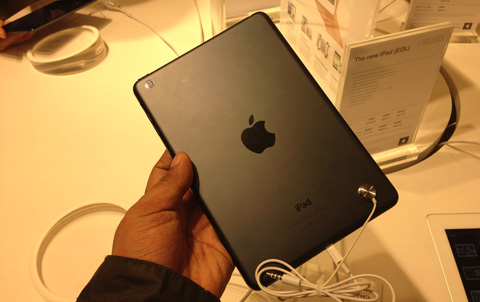 The screen resolution is good, not as impressive as the iPad 3/iPad 4 but very similar to the iPad 2. The screen brightness wasn’t also very high.

What is very evident is how thin and light the tablet is — very near the thinness of the iPhone 5. The black chrome paint at the back is also the same one as on the iPod Touch 5G.

Frankly, I find it very difficult to grasp with one hand (the same way it is shown in the ads and in Apple’s website) so I don’t think anyone would be holding it that way.

Here’s a quick video we took of the iPad Mini (people were lining up to get a closer look as well).

Been doing the rounds of Sm Lim Square this evening and even got into a heated argument with one seller because of the scammy practices around here (will post the detailed story later).