Why Ford Fiesta’s 1.0L EcoBoost is not Your Average 1-Liter Engine

We were recently loaned by Ford its 2014 Fiesta Sport+ 1.0L EcoBoost. The award-winning sub-compact is a 5-door hatchback that runs on a 3-cylinder engine (yup, just three cylinders). Don’t be fooled by the numbers, though, as it pumps out 125PS of power and 170Nm of torque. Read on and find out why this International Engine of the Year victor isn’t your ordinary 1-liter engine. 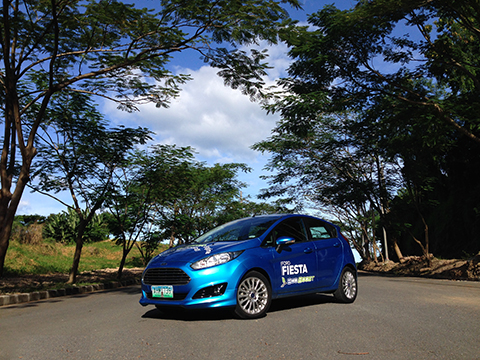 On paper, the Fiesta’s 1.0-liter engine is around the same displacement as the Kia Picanto or the Suzuki Celerio (both at the Php500K mark). What gives the Fiesta an edge over these two is its EcoBoost technology which is capable of giving its owners great mileage and amazing performance on the road. 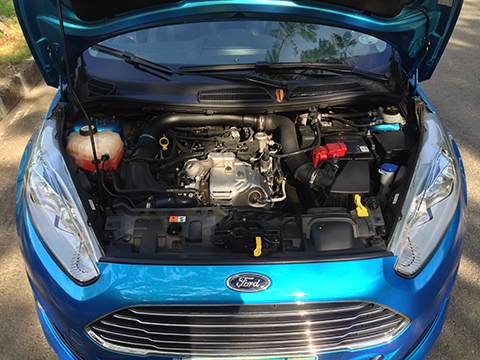 Ford’s 1.0L EcoBoost engine has been the International Engine of the Year since 2012.

With a weekend to spend time with the 1.0L Fiesta, we were able to go down south to Santa Rosa, Laguna (Nuvali area) and around Manila. We also endured going up until SM North EDSA on a nasty, 2 1/2-hour, bumper-to-bumper traffic along EDSA. We covered a total of 343.6kms in a span of 5 days, with 73kms worth of fuel left before it drains its tank. 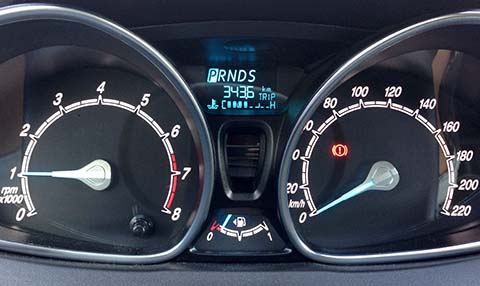 We ran a total of over 300kms with a little bit of gas left from a full tank in 5 days’ time.

Netting 11.3kms/L our fuel consumption wasn’t jaw-droppingly impressive, but it wasn’t bad either considering that we didn’t go easy on the gas pedal. We also wanted to know how fast it could run so let’s just say it was mostly pedal to the metal whenever the road before us clears up. At that rate, we would say the EcoBoost technology did its job making the engine as fuel-efficient as it can go.

Slight but repeated steps on the pedal fed the engine and made it roar little by little as if slightly opening a cage with a wild animal inside. Flooring it releases said animal and the Fiesta bolts the road without hesitation. With utmost assurance, it didn’t feel like we were running on three cylinders with only 999cc of engine displacement. For the sake of comparison, the 1.0L EcoBoost positions itself in an equal (if not better) footing against the 1.6L engine used by its older sibling in terms of acceleration and speed.

Ford’s EcoBoost technology is a nifty advantage over other brands. It combines fuel efficiency that lets you go further while providing accessible power at any time inside the Fiesta’s diminutive frame. With these offerings, it’s no surprise it nabbed the International Engine of the Year award while proving that this isn’t your average 1-liter engine.

Below are more photos of both the exterior and the interior of the vehicle.