Huawei Nova 3i vs OPPO F7 vs Samsung Galaxy A6 vs Vivo V9: 4-Way Comparison Review

Who will be the next king of mid-range?

The mid-range smartphone competition is getting very tight with so many players vying for the top spot in the 15k to 20k price segment.

Among the more aggressive players are OPPO and VIVO with Samsung repositioning its line-up with the Galaxy A6 from the J-series and Huawei trying to get a repeat performance with their Nova line. 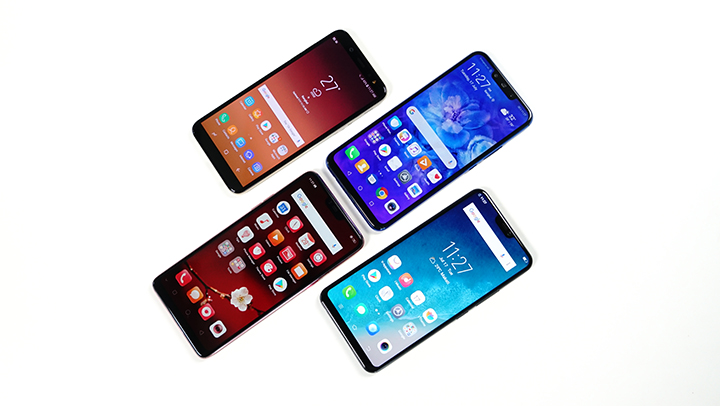 This year, it’s looking to be a 4-way battle between the newly launched Huawei Nova 3i, Samsung Galaxy A6, VIVO V9 and the OPPO F7.

So we look at each one of them both on paper and in real-life to see which device has the edge over everybody else in various categories.

Here are the categories we considered in this round-up:

We’ve already had enough hands-on time with all 4 contenders so we pretty much have a good idea of each one’s best features. 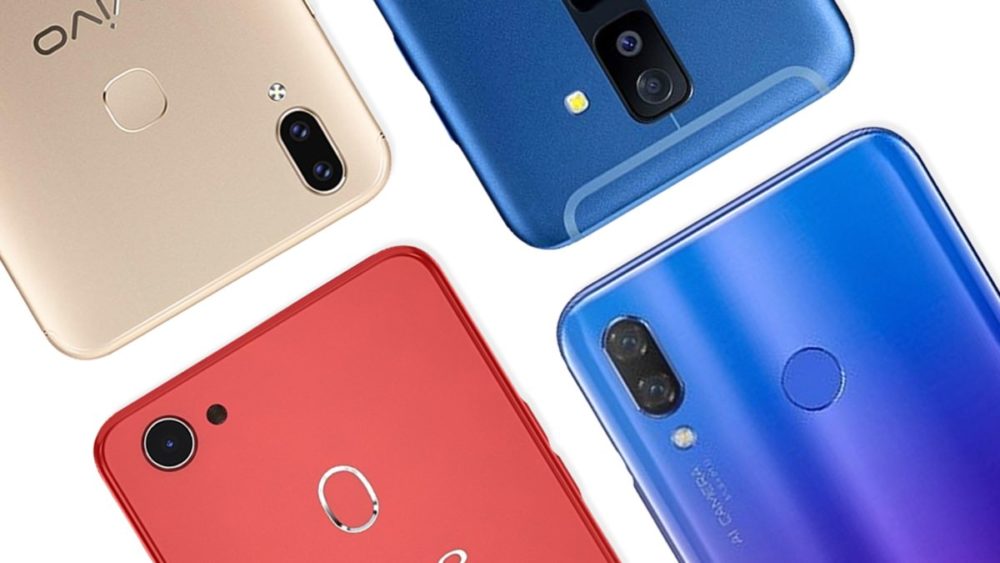 Design and build can be a bit subjective with any device. In our attempt to distinguish one over the other, we also look at the materials used, the uniqueness of the design and the attention to detail.

The Galaxy A6 and Nova 3i use metal frame while the V9 and F7 use polycarbonate materials which is a commonly used for smartphones. It is light, with thermal and impact resistant light but can easily be scratched as well.

We liked the design and finish of the OPPO F7 and the Nova 3i especially the details at the back. While the F7 has polished polycarbonate back panel, the Nova 3i uses a glass back, giving it a premium feel.

We’re giving this round to the Huawei Nova 3i for the metal frame and glass back panel followed closely by the OPPO F7, the VIVO V9, and the Galaxy A6. 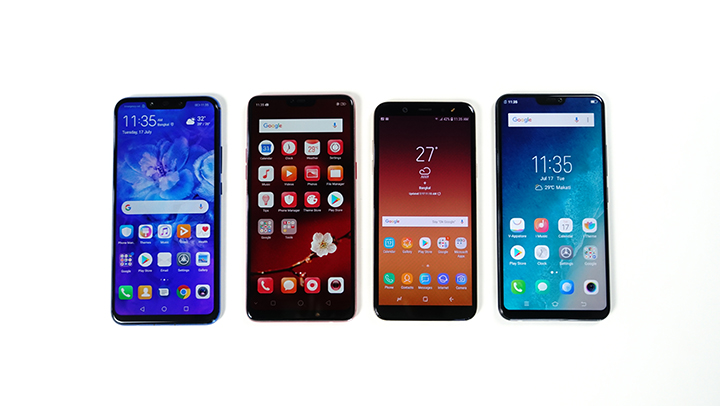 Equally sizable is the Huawei Nova 3i with its 6.3-inch IPS FullView display in a full HD+ resolution of 2340×1080 pixels and a slightly taller 19.5:9 aspect ratio. We’re quite surprised though it only has an 81% screen-to-body ratio.

Finally, the Galaxy A6 comes with a smaller 5.6-inch Super AMOLED display with an HD+ resolution or 720×1480 pixels and lower 75% screen-to-body ratio.

We give this round to the VIVO V9 and the OPPO F7 for the Gorilla Glass protection.

The Nova 3i came in very close at 3rd (we would have called it a 3-way tie if it had Gorilla Glass protection) and the Galaxy A6 is last. 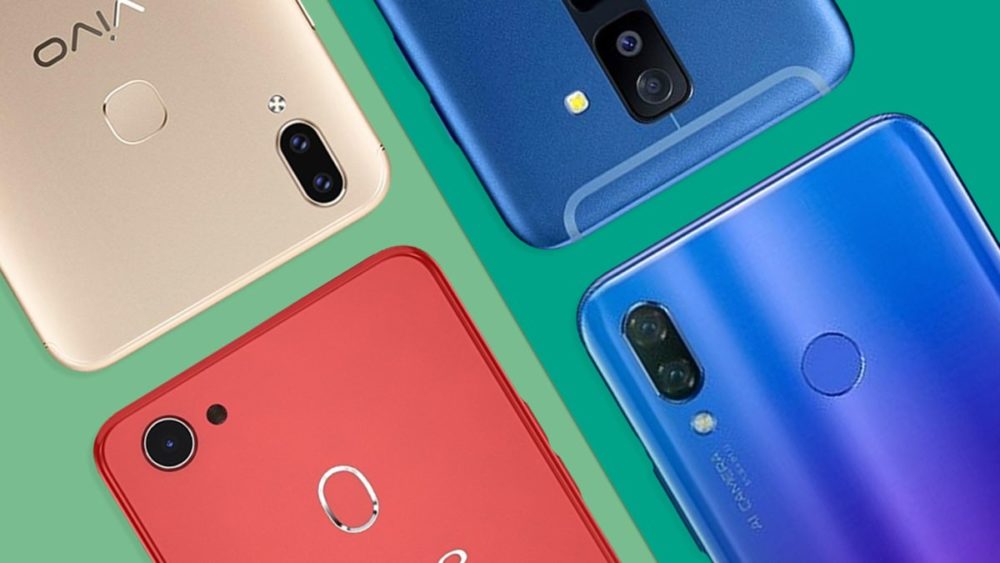 Comparing cameras is complicated because of so many factors. For one, some have a single rear and front camera, while others like the Nova 3i that goes up to four -– 2 up front and 2 at the back.

The OPPO F7 is equipped with a 16MP rear camera and 25MP front camera with AI features and Screen Flash. It has scene recognition which supports 16 scenes and objects, HDR, Depth Effect, Panorama, Expert mode (Manual), AR Sticker with 14 effects, Vivid Mode which simply enhances the color, and Beauty with 6 levels of adjustments. There’s an AI-assisted Beauty mode but is only available for the front camera.

One of the main features of the Nova 3i is its cameras. It still has four cameras like the Nova 2i but it’s now more powerful and comes with extra features. It has a 16MP + 2MP rear cameras, and 24MP f/2.0 + 2MP front cameras. Like with the Nova 2i, the 2MP secondary sensors are there to aid in bokeh effects.

It’s got plenty of features like Pro, Slow-mo, Night, Panorama, Light painting, HDR, Time-lapse, 3D Panorama, Document scan, Beauty, Aperture, Portrait, and AR Lens which we will discuss in a bit. It also has an AI scene recognition which can detect up to 22 different scenes.

The AR Lens feature is one of the most fun to use. Aside from “stickers” that are found in other mid-range smartphones, it has the 3D Qmoji which is similar to the iPhone X’s Animoji, Backgrounds which adds animations to your background, and since the device supports Google ARCore, it has the 3D Objects feature which adds animated objects in Augmented Reality.

Huawei Nova 3i no beauty

Samsung Galaxy A6 no beauty

The Nova 3i is our pick when using the rear camera and the VIVO V9 and OPPO F7 wins the front-facing camera. This was determined by doing a blind comparison test among editors in the team.

We’re giving this round to the Nova 3i followed by the VIVO V9 and OPPO F7 tied in second place and Galaxy A6 placing last. 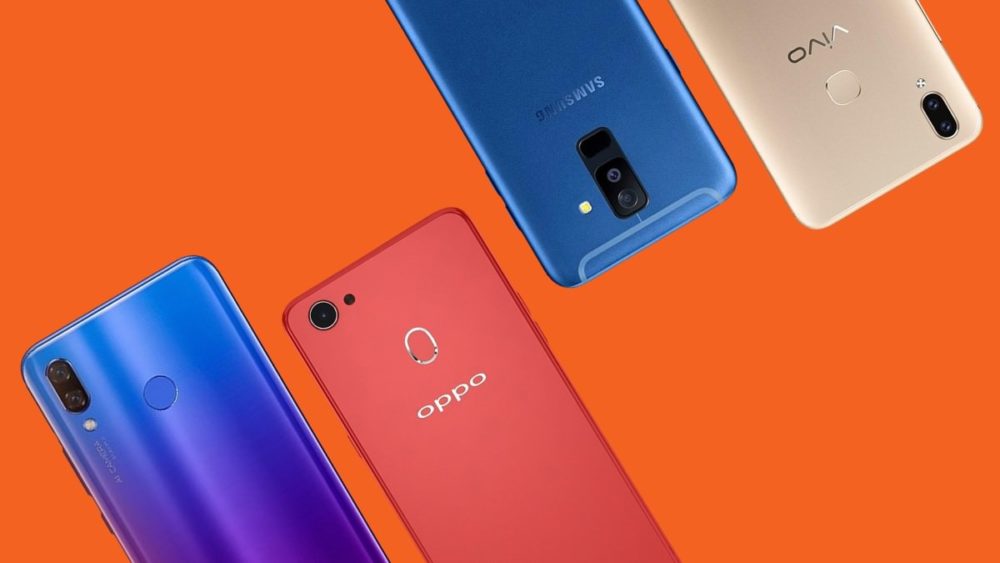 Computing power is at the heart of any smartphone. It dictates the performance of the device – how fast it runs and how smooth the operation, especially when we’re dealing with intensive apps and games.

To help us be more objective and add perspective in this category, we looked at synthetic benchmarks (in this test, we used Antutu v7) to determine their raw power.

Here are the results of the test:

Based in our Antutu benchmark, the F7’s P60 chipset and the Kirin 710 of the Nova 3i are statistically tied, followed by the Snapdragon 626 of the VIVO V9 and the Exysnos 7870 of the Galaxy A6. 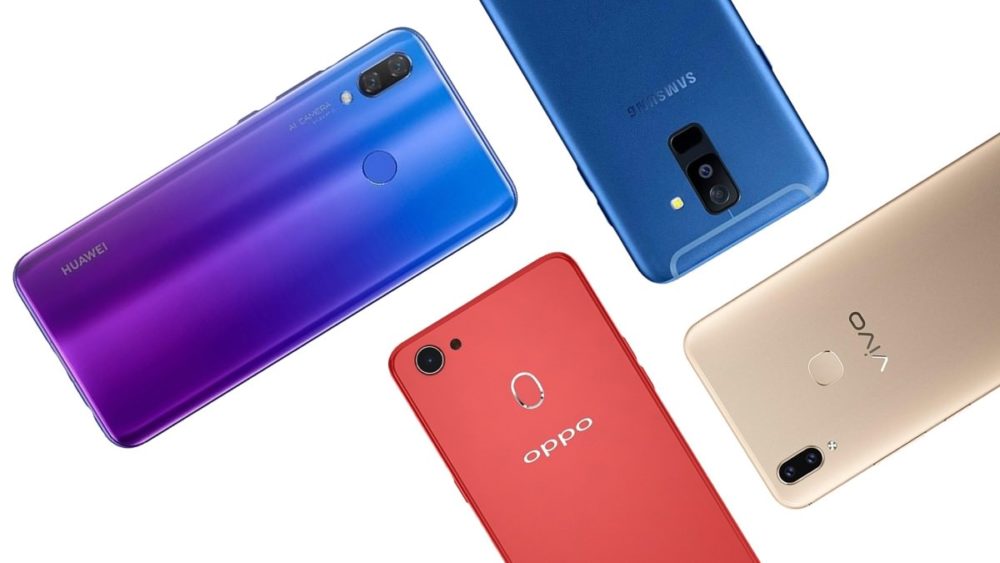 System memory is essential in order to get a smooth and snappy performance especially when a lot of apps are loaded or are running in the background. For the most part, we can safely say that 4GB of RAM should be enough in a smartphone. Even a lot of the flagship devices have this amount of RAM with the exception of a few.

Nevertheless, more RAM is generally better. In this category, it’s a 3-way tie between the VIVO V9, Nova 3i and OPPO F7 (note: there’s a variant of the F7 that has 6GB of RAM but that’s a special edition with a higher price tag). Dead last is the Galaxy A6 with only 3GB of RAM. Internal storage is a huge consideration considering the growing sizes of apps and games in the Google Play Store as well as the amount of media we download actually create (photos and videos). 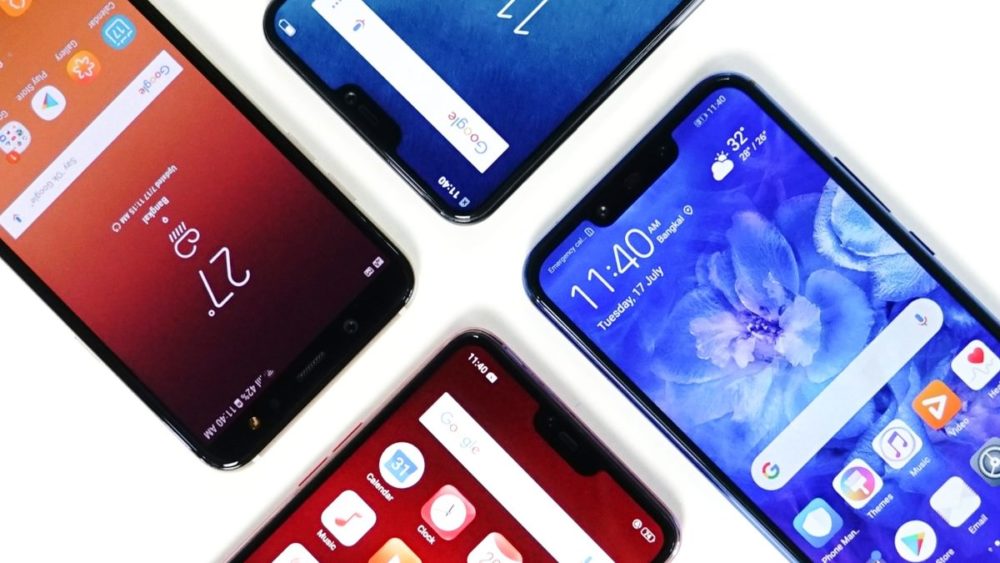 Battery life is a little tricky. Bigger capacity (in mAh) does not always follow a longer battery life. This is because of other factors such as processor efficiency, display technology, and system optimization.

In order to determine this, we used a set of test to standardize the measurement. One if the PCMark Battery test and the second is the video loop test.

Here are the results of our test for all 4 devices. The operating system is an essential component of a smartphone. Newer versions offer more features and better overall experience.

In this case, the VIVO V9, OPPO F7 and Huawei Nova 3i all run on the latest Android 8.1 Oreo while the Galaxy A6 is just a minor update behind at Android 8.0.

It’s a 3-way tie in this category with the A6 in dead last.

Filipino consumers are very price sensitive. The strategic pricing of a smartphone can make or break the success for the line.

If you’re on a tight budget, the Nova 3i is the obvious choice here since it is priced the lowest among the four. 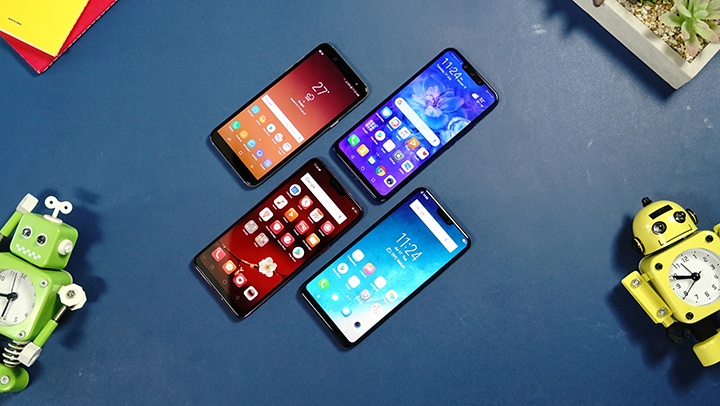 It’s a very tight race and here are the tally of the scores from each category:

In this 4-way comparison, the Huawei Nova 3i stands out from the rest, winning a plurality of the categories we outline. It’s actually a very tight race between the Nova 3i and the OPPO F7 although the Php2,000 price difference between the two can be a huge consideration with buyers when you put them side by side.

Inching closely behind is the VIVO V9 and the Samsung Galaxy A6 in last place.

Hi can you please compare huawei nova 3i with asus zenfone 5? I cant decide which one to buy. Many Thanks!

please try to compare the new zenfone 5 lines. especially the 5Q which is closy priced around 15k. thanks

hindi, i already tried it while playing rules of survival, while having a call, not even a slightest interruption or lag..for me oppo f7 is the best, yet..

Video Loop test for Oppo F7 is 23 hours, seriously? di ba yan typo? more like 13hours is believable.
Also, Oppo F7 is being sold at 15k now at Laz, Shopee, and some stores lately. This needs to be updated.

We got 23 hours in our video loop test. You can try and replicate our test.

You just started a war.. lol. Nice comparison though.. I’ve been looking for something like this for days.. XD kudos to u sir!

Please compare them with Asus Zenfone 5.

Why not put the Asus Zenfone 5 in the comparison