Samsung Galaxy S20 series: Which one is for you?

Just when you think Samsung is done with their S20 series, the brand just added another device to the family, and it’s the recently launched Samsung Galaxy S20 FE (Fan Edition).

Expected to be priced around 30k, this toned-down version packs a few notable similarities to the other phones in the S20 line. So to guide you in deciding which S20 smartphone is for you, keep on reading. 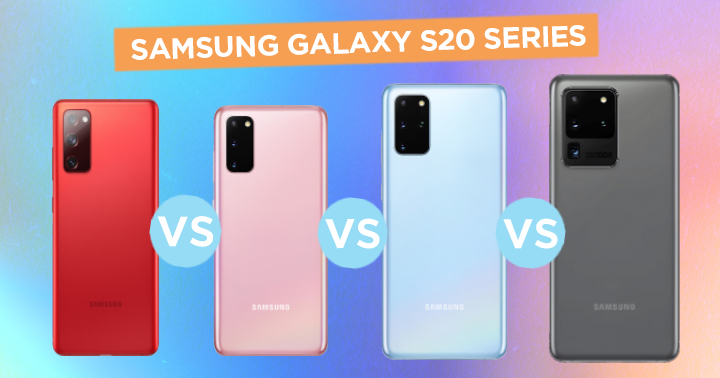 Starting with the display, Samsung outfitted the S20 series devices with screens that match. The Galaxy S20 Ultra has the largest of the four, measuring 6.9 inches with a QHD+ resolution, followed by the Galaxy S20 Plus which measures 6.7 inches with a QHD+ resolution as well. The newest S20 FE has a 6.5-inch FHD+ screen, while the S20 has the smallest QHD+ screen measuring 6.2-inches.

All three S20, S20 Plus, and S20 Ultra all come with a 120Hz Dynamic AMOLED 2.0 display with Corning Gorilla Glass 6 protection. On the other hand, the S20 FE also has a 120Hz option but with an AMOLED panel. All phones have HDR10+ support.

Under the hood, all variants of the Galaxy S20 are powered by a Samsung Exynos 990 CPU. In terms of RAM and storage, the S20 Ultra is equipped with 12GB/16GB of LPDDR5 RAM and up to 512GB of UFS3.0 storage. Meanwhile, locally the Galaxy S20 Plus, S20, and S20 FE all pack 8GB LPDDR5 RAM and 128GB of internal storage. Users can also expand the storage of all variants by up to 1TB via MicroSD card.

You can expect the best of the best in the series on the S20 Ultra. At the back, it has a 108MP primary lens, a 2MP ultra-wide, a 48MP telephoto, and a Depth Vision. While on its notch is a 40MP front camera.

All three devices have the same biometrics features, face-unlock, GPS, Bluetooth 5.0, NFC, and an IP68 rating. As for the OS, all comes with One UI 2.0 based on Android 10 out of the box.

Here are the official prices of each device:

The Galaxy S20 FE is probably the last addition to the S20 line, and it surely gives an affordable option to experience the flagship offerings of its three higher-end siblings. For almost half the price of the Galaxy S20 Ultra, you get the same flagship chipset, a bigger display, and battery compared to the S20, better front camera, and almost all the features that are present on the rest of the S20 series. For most consumers, the S20 FE should be enough to handle all their day-to-day tasks.

The standard S20 may be smaller than the S20 FE, but it still proves to be more premium with a Dynamic AMOLED 2.0 display, a 64MP lens, 8K video recording, and Corning Gorilla Glass 6 protection. If you’re into smaller smartphones but packs all the important high-end features and performance of the series, then the S20 might be for you. Plus, it comes in pink color too.

As for the S20 Plus, its size sits in the middle between the S20 Ultra and S20 FE. It has a similar display and protection to the S20 Ultra and standard S20 but with a higher pixel density. It has quad rear cameras that are also capable of 8K video recording and space zoom. You can treat this as a closer toned-down version to the Ultra and an upgrade from the S20 and S20 FE. It’s kind of a safe choice if you want almost all the best features with a trimmed price.

Now if you want the all-out, best of the best, then say no more, it’s the Galaxy S20 Ultra. For a higher price tag, it boasts more features including 5G connectivity and WiFi 6 capabilities. It has the best display, most RAM, most internal storage, best rear cameras, biggest battery capacity, and the fastest charging as well.

So which of the S20 series smartphones caught your eye? Let us know in the comments.