Just a couple of weeks ago, Samsung launched the latest Galaxy Tab S7 and what better way than to compare it to Huawei’s MatePad Pro as they fairly share the same specs. If you’re deciding which one of these two tablets to buy, then read on. 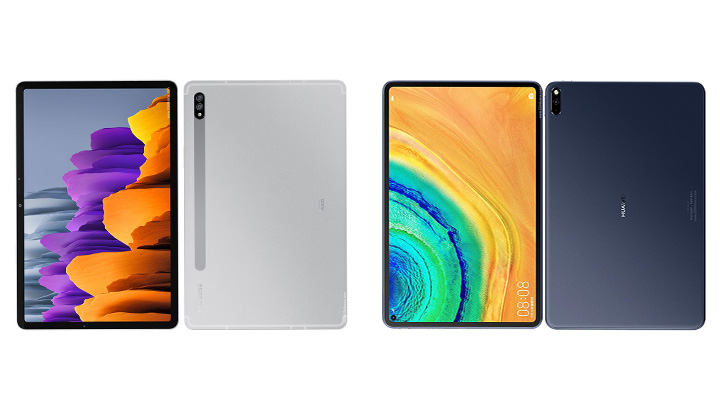 The Samsung Galaxy Tab S7 sports a larger 11-inch LTPS TFT WQXGA while the Huawei MatePad Pro comes in a 10.8-inch LCD with DCI-P3 Gamut coverage. Both devices have the same 2560 x 1600 resolution, so we expect that both devices will provide a great viewing experience. Even though the Galaxy Tab S7’s display is a tad bit bigger, the MatePad Pro comes with thinner bezels, but of course, each to his own when it comes to screen preference.

For RAM and storage, both the Galaxy Tab S7 and the MatePad Pro are onboard with 6GB RAM and 128GB internal storage. However, for extra storage, the former takes the cake as its expandable up to 1TB.

In terms of cameras, both the Galaxy Tab S7 and the MatePad Pro features the same 13MP primary camera, but the former comes with an additional 5MP ultra-wide camera lens.

Quite honestly, both the Galaxy Tab S7 and the MatePad Pro are powerful devices packed with great features. If you’re looking for a slightly smaller and not-so-expensive tablet, then the MatePad Pro is your best choice– although the lack of GMS might be a deal-breaker for some of you. Just like the Galaxy Tab S7, it comes with the latest flagship processor and the same RAM and internal storage configuration on board.

But if you’re willing to shell out an extra PHP15K and you have the budget, then cop the latest Samsung Galaxy Tab S7. You’d get a larger display, dual-rear cameras, larger battery capacity, and Samsung DeX.

So, which one are you getting? Let us know in the comments below!