Vivo Philippines has recently announced that they will be releasing their latest mid-range offering, the V19. Being a camera-centric device with a Super AMOLED display and midrange chipset, fast memory, and storage. As such, it will be competing with the Xiaomi’s latest offering, the Mi Note 10 Lite. Which of the two should you get? Read on to find out. 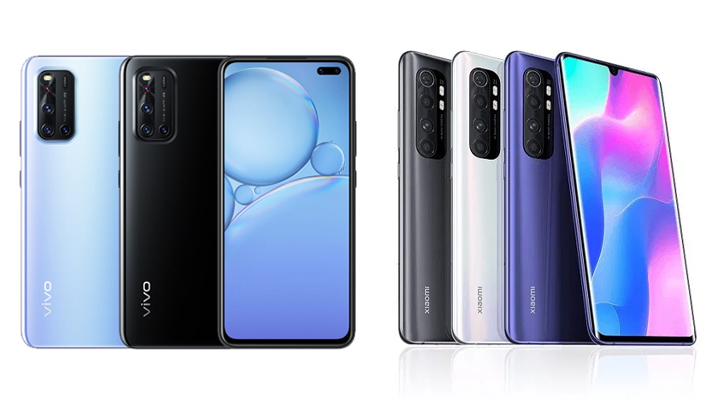 While both devices use a Full HD HDR10 compatible panel, the V19 sports a 6.44-inch flat Super AMOLED panel, while the Mi Note 10 Lite uses a curved AMOLED display. The front camera modules are also different, with the V19 using a pill-shaped punch-hole and the Mi Note 10 Lite using a more dated notch.

We’re giving both devices a tie here, leaving the choice to the user on whether or not you’d want a curved or flat display.

As for the chipset, the Mi Note 10 Lite comes with the slightly more powerful Snapdragon 730G, while the Vivo V19 is equipped with the Snapdragon 712. According to Kimovil’s AnTuTu V8 results, the difference between the two devices around 45,000 points.

While you wouldn’t experience any lags with normal day to day use, the Mi Note 10 Lite will perform better in GPU heavy applications such as games.

Memory-wise, both devices come with LPDDR4X and UFS 2.1, although the configurations are different. The V19 can be purchased in either 8GB+128GB or 8GB+256GB variants, while the Mi Note 10 Lite is available in either the 6GB+64GB or 8GB+128GB option. It’s also important to note that the V19 supports MicroSD cards for storage expandability, while the Mi Note 10 Lite does not.

For people who enjoy taking photos with their phones, or have a lot of files saved up, the Vivo V19 would be the better choice due to the higher storage variant and expandability.

When it comes to the cameras, both devices have quad rear cameras but with different resolutions and front cameras. The V19 is equipped with a 48MP primary accompanied by an 8MP ultra-wide, 2MP bokeh, and a 2MP macro shooter. The Mi Note 10 Lite comes with the same resolution ultra-wide and macro lenses, but have upgraded  64MP primary and 5MP depth sensors.

The front cameras on the V19 are also better, equipped with a 32MP wide and 8MP ultra-wide. They’re much more versatile compared to the Mi Note 10 Lite, which only comes with a single 16MP shooter.

In terms of cameras, both devices have their weak and strong points. The V19 has better front cameras, while the Mi Note 10 Lite has better rear cameras. It comes down to which of the two you use more. As usual, we would like to remind you that pixel count is not the end-all-be-all of cameras. Stay tuned for our full review to check out the different camera samples of each device.

When it comes to connectivity, the Mi Note 10 Lite is more feature-rich thanks to its WiFi 802.11 ac support, NFC and IR Blaster. It also has several features not present in the V19, such as HiFi, Hi-Res Audio, and IR Blaster. The V19 does, however, make use of Copper Tube Liquid Cooling.

Both devices also use an in-display fingerprint scanner and come with Android 10 out of the box, with each respective skins on top: Funtouch OS 10 for the V19, and MIUI 11 for the Mi Note 10 Lite.

While the Mi Note 10 Lite does appear to have a higher battery capacity with almost the same fast charging support, we have to take into consideration OS optimizations and other factors as well.

While Vivo is yet to unveil the V19’s pricing, the Xiaomi Mi Note 10 Lite has been priced at:

Stay tuned for our coverage of Vivo’s Ignite Your Night event, to learn more about its prices, and availability.

So which device should I get?

If you require a lot of storage for your files, take a lot of selfies, but don’t play heavy games, you’ll be satisfied with the Vivo V19. It also comes with a flatter display, which is easier to use even when lying down.

That being said, the Mi Note 10 Lite is more feature-rich. It comes with NFC, an IR Blaster, higher rear camera resolution, and a faster chipset for those who love playing games. Audio lovers will also gravitate towards the Mi Note 10, thanks to its HiFi, Hi-Red Audio certification. It boils down to whether or not you really need the extra space, as you’re limited to the internal storage.