Xiaomi and Samsung are two of the most influential smartphone brands in the country. Both companies produce quality and innovative phones that catch the attention of Filipino consumers. Two of those smartphones are the Xiaomi Mi 9T and the Samsung Galaxy A80. Both of them have the same chipset; however, which device has the advantages on certain key smartphone aspects? Find out in this specs comparison. 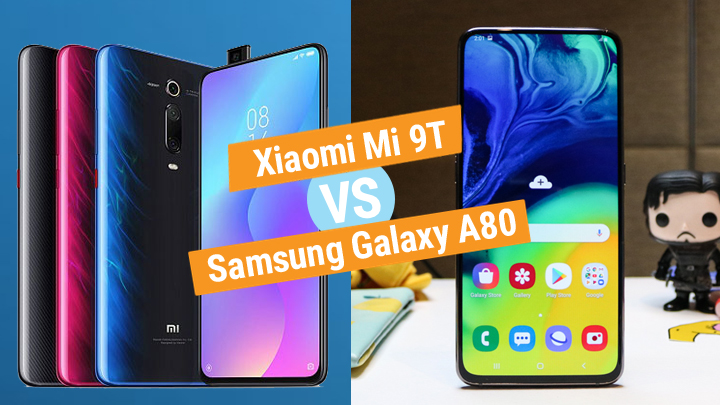 In terms of design, Both of them have a full-screen display with a pretty sexy look overall. To me, the Mi 9T is more aesthetically pleasing as compared to the Galaxy A80. However, that’s just my own bias, so feel free to express your preferences.

Starting with the display, the Galaxy A80 is better in terms of the viewing experience. Its 6.7-inch screen, along with a taller aspect ratio, makes it more appealing for people who are into watching videos or movies. It might be too big to some, though, so the Mi 9T is still a great device since it is smaller.

Both phones sport a Snapdragon 730 chipset that’s relatively new to the market. We don’t have the numbers yet as we’ve yet to test out the performance of both phones; however, the Galaxy A80 still has an advantage due to the larger RAM capacity that it possesses.

Camera-wise, I wouldn’t say yet whether which one produces a better photo quality. The devices vary in their camera setups, with the Mi 9T having an elevated front camera and a higher rear camera resolution while the Galaxy A80 doesn’t have the traditional selfie camera. It’s interesting to know that the latter also uses its rear cameras as its front, which means that quality of selfies and rear shots are the same for this device. We’ll test them out once we get our hands on both devices.

For features, the Dolby Atmos inside the Galaxy A80 is a great tool, especially that it doesn’t have a 3.5mm audio port. The Mi 9T, on the other hand, has the headphone port, which is advantageous as the majority of people still uses wired earphones or headphones without the need for USB-C dongles.

For battery capacity, the Mi 9T may have a larger battery capacity but the Galaxy A80 has the more powerful fast charging wattage. This aspect is a choose-your-poison kind of thing, given that the former will most likely consume less power due to its screen size while the latter might have to be recharged more frequently.

The Xiaomi Mi 9T is priced at PHP 15,990 and PHP 17,990 for the 64GB and 128GB variants, respectively. The Samsung Galaxy A80; however, is not yet officially priced in the country. If it receives one and the price difference is significant, I’d suggest that you go with the Mi 9T instead if you have a limited budget.