The latest version of Android has finally reached our Nexus 4 – 4.4 KitKat! Basically, coverage about the new Android treat has been out since the Nexus 5’s announcement already, so figured that this time, we could compare it to its biggest & most talked about competitor, iOS 7. Just for a quick recap, here are the most noticeable changes we’ve found with Android 4.4 KitKat:

Sadly, the Google Experience Launcher found on the Nexus 5 didn’t make it to the Nexus 4 via the update. Anyway, we’ve manually installed it through an .apk and we suggest that you’d do the same if you get it. It’s a lot better than the old stock launcher (placing widgets, Google Now all the way to the left). Plus, in the old launcher, transparent elements can’t be utilized and Google Now won’t be used as frequently. 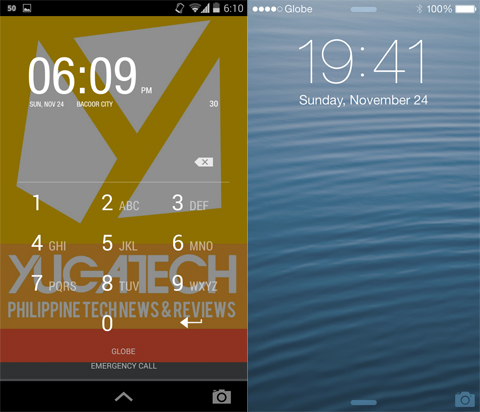 One of the first things you’re probably going to notice is the lockscreen. Not much has changed to be honest except for the transparent elements and the new camera icon on the bottom right corner. Other than that, everything will be a breeze once you get past it. 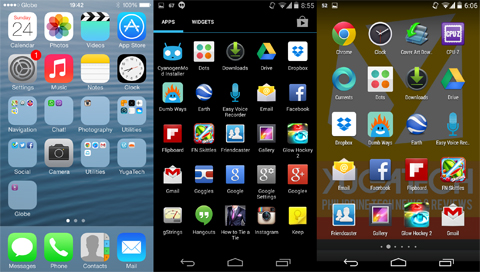 We have to say that both app drawers are very straightforward and similar, even if in iOS 7 the app drawer IS the homescreen. Both fonts are also looking very beautiful – Helvetica Neue & Roboto (Condensed Type now added). If you need folders, iOS 7 provides that while in Android, you need to be in the homescreen itself. 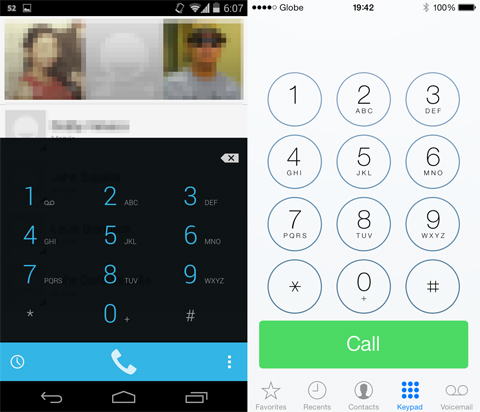 Enter the new Dialer app for Android. While the iOS’ iteration is a lot more simple and easy to use, we have to give Google’s creativity & innovation some credit.

Having a web search of the places you can possibly call on the spot is a neat trick in KitKat, not to mention Caller ID support is also packed with it. Just type in a restaurant’s name and it will start suggesting numbers. The suggestions aren’t very comprehensive yet here in the Philippines, but it’s a great start for those who enjoy having food delivered to their door. 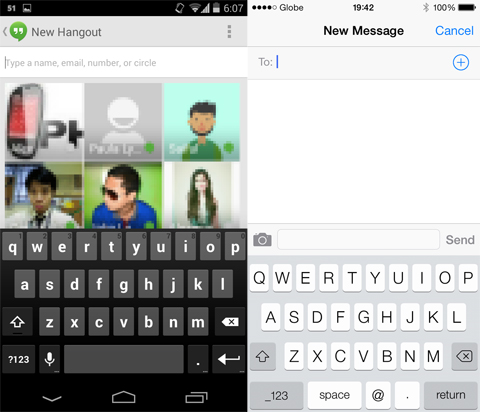 The update to my Nexus 4 didn’t necessarily remove the original messaging app; it just made Hangouts an uninstallable app. Hangouts is the future of Android’s messaging platform, and with that said we can say that it does a lot of things better than the old app.

For now, I think we can say that Apple’s messaging platform is more polished compared to Hangouts, but again not by a mile. Hangouts’ integration is a bit messy while Apple’s iMessage feels more seamless; it’s just that FaceTime & other features could use some integration as well. 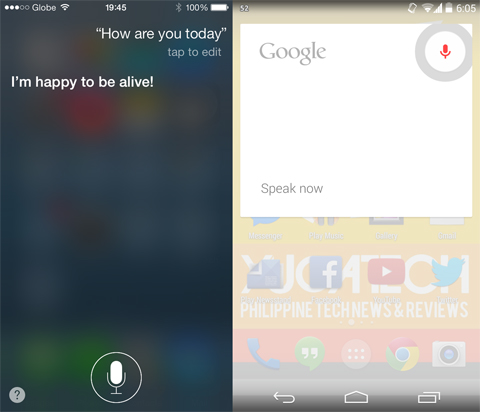 Siri might no longer be in beta, but the updated Google Now improves upon a lot of things and we found ourselves using it more especially with it being very accessible in the homescreen. Even if you’re not running KitKat, you can utilize this and again, we have to give it to Google for such a feature. Siri may still be the voice assistant you can talk to, but Google Now just brings in the better results if you know how to use it properly.

The camera app remains the same in KitKat – slow to focus, boring & plain. On the other hand, iOS 7’s camera app is something we wish we could have seen in Android – there are quick toggles everywhere, filters are available and it’s very fast too. The notification system on Android is still ahead by a mile compared to iOS 7. It is just now that Apple thought of placing toggles and shortcuts on an accessible place called Control Center, while this specific functionality has been found on Android for years.

Right now, KitKat just made it much more polished as it features quick responses, two-finger drag down toggles & a refined location logo. We could have wished for Google to add battery percentage functionality, but that’s a minor complaint that could be easily fixed by an app. 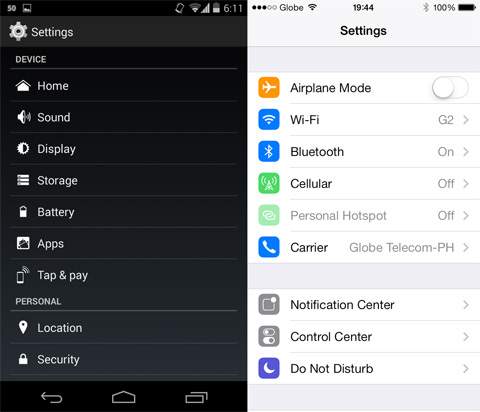 The settings app is one of those things that hasn’t changed much in terms of design in Android 4.4 KitKat. It still looks like the same thing from Ice Cream Sandwich and frankly, it doesn’t match the new bright theme of Google’s Cards UI.

While in terms of design, Apple’s iOS 7 definitely takes the extra mile in the settings app, Android still offers a lot more options to tinker with and more. In KitKat, they’ve added Home, Tap & Pay and Printing. 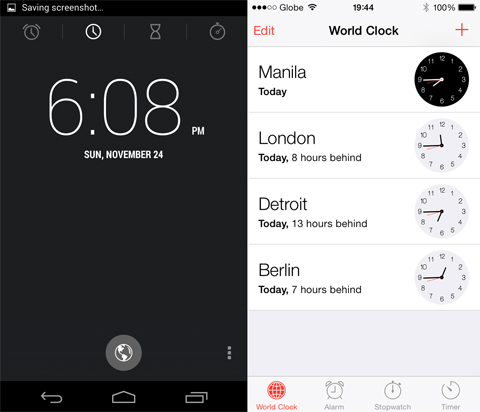 For the incremental +.1 update for KitKat, the updates in the smaller apps were incremental too. There weren’t a total re-imagining of apps; more of polishing. Examples of these are the Clock & Calculator apps. For iOS 7 however, there was definitely a redesign, but the way on how things work remain basically the same.

One of the final major concerns for comparing operating systems would probably be the ecosystem question. Apple provides a lot of apps and services that go beyond Google’s reach, but the number gap between is getting closer and closer.

In the end, it’s still up to you on which system to side on. iOS 7 has caused a lot of fuss since its announcement, but compared to Android’s newest software version, it isn’t all that bad. In fact, they’re both great updates to both great mobile operating systems. And just as always, you just have to choose wisely on which to invest your time & money on. The only catch is – the 3rd player might just catch up next year.