On a lighter note, users of Google Maps recently came across with something that instantly caught their attention — the Android character taking a glorious piss at Apple’s logo. Google comes out with an apology. 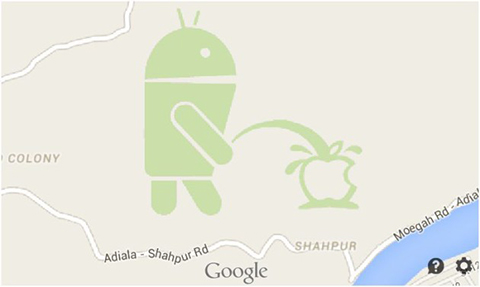 The image above was seen somewhere in Pakistan.

Google Maps uses a tool called Map Maker that acts like a crowdsourcing method to update the map around the world so information is always fresh (think Waze). Anyone could update it, but a team from Google is supposedly screening them and checking if they are accurate. Well it seems someone successfully hid from the radar.

A representative from Google released a statement regarding the prank:

“We’re sorry for this inappropriate user-created content; we’re working to remove it quickly,” said Marra Harris of Google. “We also learn from these issues, and we’re constantly improving how we detect, prevent and handle bad edits.”

We tried looking for the image but it was apparently taken down already. As to who posted the image is still unclear. Is it some random Android fanboy? Is it really pissing on the apple, or did it just throw it on the floor? Thoughts?