Apple has iCloud, Microsoft has SkyDrive, and just when we thought that Google will stop at Google Docs, rumors of a cloud-based storage is now on the horizon, and it may be better than what youâ€™re currently using. Google Drive is set launch next week with 5GB of free cloud space.

According to TNW (thenextweb.com) Google will be releasing their own version of cloud-based storage in the name of Google Drive next week. This service is said to give users free 5GB of cloud space from the get go and is rumored to offer more for an extra dough. That’s more than double of what DropBox is offering as a start-up for its users which is only at 2GB. Much like its competitor, Google Drive is also said to have drag-and-drop functionality that supports both PC and Mac. There are no details yet of how this will come about, but that would certainly be a welcome feature.

See also  Why the Google Chromebook will fail? 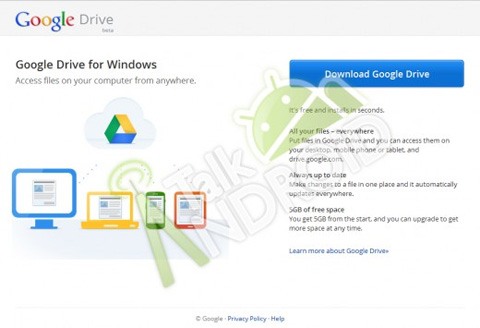 This is not the first time that Google offered free storage for their users. Weâ€™ve actually seen various channels where users can upload and store their contents in the cloud like Google Music, Google Docs, Google + and Picasa. Following the same principle as their recent app, Google Play, I think what Google is trying to pull off with Google Drive is to collaborate various channels into one cloud-based service for a more seamless way of storing and accessing files anywhere, anytime.

If this is true, then this will be great new for Android users as they will no longer be dependent on a third party app for extra storage and their files are stored in one place, readily accessible when needed.

Let’s wait and see how Google Drive will fare against other cloud-based services.

I will surely love this service more than SkyDrive.. I dont need that 25Gigs just for my small file back ups..

I wish it has the syncing feature like Dropbox

This was nice, creating more opportunity to attract more.

You forgot about youtube it is also considered a form of cloud storage.

Microsoft’s skydrive is the best. . 25GB