YouTube for Android get Offline Playback, Now in PH

YouTube for Android get Offline Playback, Now in PH

Google-owned video streaming website has recently announced that the Android version of the YouTube app will have a new feature called Offline Playback. The said feature will initially be rolled out in select countries (India and Indonesia), including the Philippines. 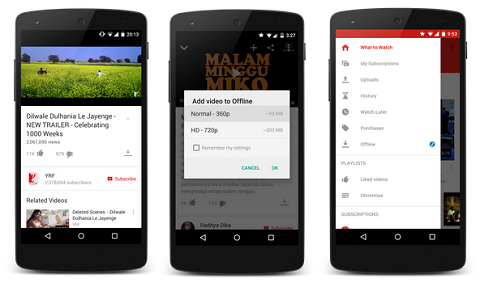 In a blog post, Google stated that the decision to roll out the new feature first in India, Indonesia and Philippines rather than in more developed markets has something to do with the current situation of internet connectivity in these countries.

Asia has proven itself to be a mobile-first world in terms of smartphone adoption, but access to high-speed, affordable data remains a big challenge. In response, we’ve been working on ways to lessen the demands of speed and data for people using our products in places where there are challenges to access.

To use the Offline Playback feature, users just needs to tap on the “Offline” icon. This will initiate the caching of supported videos which will be stored in the device for 48 hours. This way, the user will be able to watch the selected video at a later time while not giving them permanent access to the cached clip.