Nothing beats a well-planned and developed game. Users get to experience a flawless and continuous experience to sit and relax. That of course, is in a perfect world, and in reality, no matter how well made the game is, one person will find a glitch or a bug one way or another. This is why companies really buckle down on the development process to achieve perfection as close as possible, but sometimes the process just takes too long. Here is a list of Games that had long development periods. 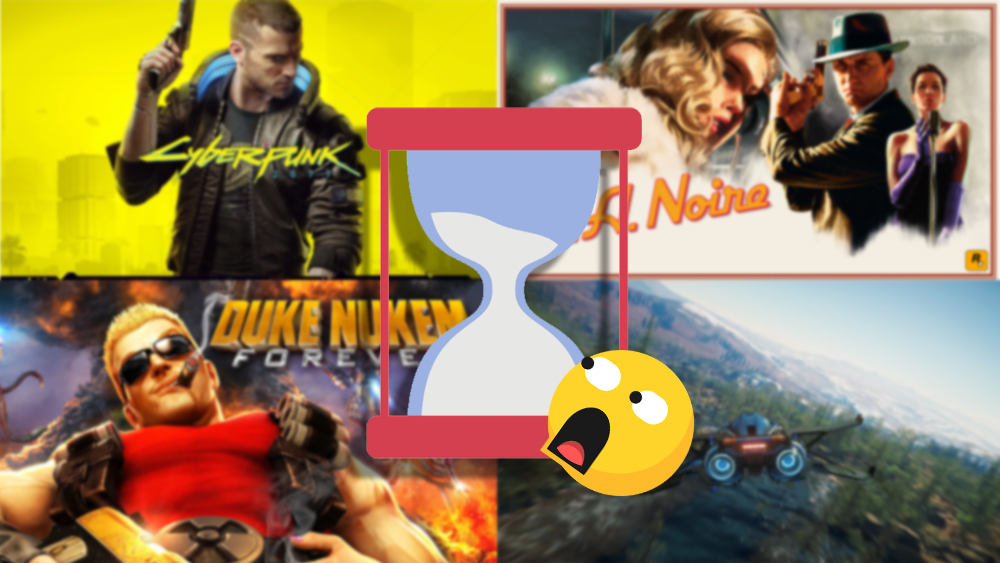 Authors note: The list will go from the shortest to the longest in game development.

L.A. Noire is a mystery-solving sandbox game developed by Team Bondi and published by Rockstar Games. The development of the game began in 2004 and was finally released in 2011. It had numerous delays because the team wanted to fulfill its plans of a 1947 Los Angeles vibe, an original engine, and very expressive character models. The overall development for L.A. Noire was priced at around USD 50 million, which is classified as one of the most expensive video games ever made.

Spore is a simulation computer game developed by Maxis and published by Electronic Arts. In essence, Spore is an evolution simulation game where players guide their respective molds until it becomes a sentient creature. The game is quite old as it began development in 2000 and was released eight years after.

On to the more and overly hyped title, Cyberpunk 2077. The game was developed by CD Projekt Red in the year 2012 and began hyping its crowd with intricate and well-made trailers. After eight excruciating years, the game was finally released in the late month of December 2020.

The game is a first-person RPG game displaced in the dystopic future where humans are equipped with insane mechanical body modifications. Players assume the role of V and attempt to make Night City their oyster. The premise of the game was received well by the community, but as soon as it was released the game just went south, a big yikes for the estimated amount of USD 313 million spent for the game.

The Last Guardian is a third-person perspective game that combines elements from both the action-adventure and puzzle-solving genres. Players assume the role of a boy who utilizes objects around to traverse or defeat Armored Knights. The game has been active development around 2007 and was finally released nine years later in 2016. It was initially planned for PS3 but then the team decided to move to PS4.

And next up we have the widely popular multiplayer first-person shooter game developed by the one and only valve. Team Fortress 2 is noted to be the sequel of the old game called Quake. Players are placed into two teams, of either red or blue, choose one character to play and play different modes such as capture the flag and king of the hill.

The original Team Fortress was developed by Robin Walker and John Cook as a free mod for Quake. It then expanded into Valves library and was released in 2007 after its first development in the year 1998.

Up next is a popular series, Final Fantasy XV. As hinted in the name, this game is the fifteenth installment of the franchise. It is an open-world, action role-playing game in which players control Noctis who can perform a variety of cations in the realm of exploration and combat. The development began in 2006 and was released 2016, amounting to 10 years of development. Geez.

Diablo III is a hack-and-slash action role-playing game developed by Blizzard where players can play seven characters such as Barbarian, Crusader, Demon Hunter, etc. Diablo III began its development a year after the release of Diablo II in 2001 and was eventually released in 2012. Many questions arose as to why it took so long, but it was probably due to other published titles such as Starcraft and Titan. Only Blizzard will know the true story behind Diablo’s development.

Star Citizen is a multiplayer space treading and combat simulation game that is still currently in development by Cloud Imperium Games. The game was announced back in 2012 through a Kickstarter campaign, which drew USD 2 million, and was supposed to be released in 2014 but has been repeatedly delayed—until this day.

The gameplay will feature modules such as a space simulator and first-person shooter in a massively multiplayer structure, but the question now is when—when will it release! Only time will tell.

This may come as an odd pick for this list, but we have the Japan-only release called Mother 3. This game is the third and final installment of the series and was developed by HAL Laboratory. The game follows a boy who holds psychic powers named Lucas who attempts to prevent the mysterious invasion of an army from corrupting and destroying their world.

The game began development way back in 1994 for the Super Famicom console and was canceled in 2000. Three years after, it was booted back up for Game Boy Advance and was eventually released in 2006—quite the rollercoaster.

Finally we have this first-person shooter video game started its development in frigin 1996 as a sequel to Duke Nukem 3D. It endured several delays which eventually had the developers say that the game will be released when it’s done, giving the press no clear date because they also had no clear date in mind—which is quite funny. The game is quite simple as players take control of Duke Nukem and navigate a series of levels that hold a boss alien. After 15 years, Duke Nukem Forever was finally released in 2011, making it’s awaiting fans feel a short slither of “forever”.

And there you guys have it, a list of games that took their sweet time in development. Some for the right purposes and some due to delays. What do you guys think of this? Feel free to share your thoughts in the comments below.