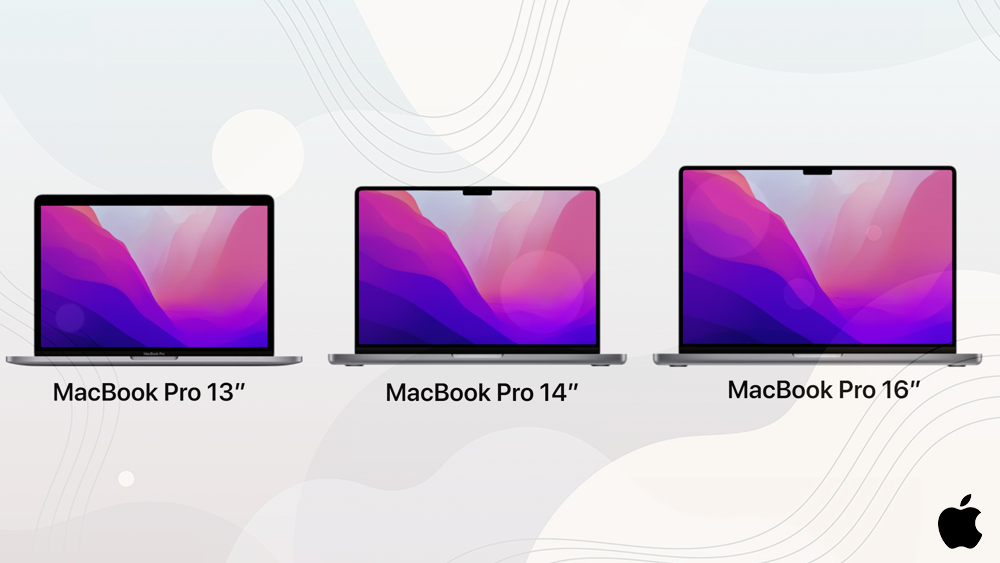 This is the part where the differences are the most obvious. The three MacBooks feature different screen sizes with the 13.3-inch model being the smallest with the lowest resolution, while the 16-inch model has the biggest screen and the highest resolution. The 14-inch model, on the other hand, sits in the middle.

While the 13-inch model’s screen can already be considered good, it falls behind the 14-inch and 16-inch models’ 1600 nits peak brightness and 120Hz ProMotion with an adaptive refresh rate. Also, you will also notice the new screen design on the 14 and 16-inch models with slimmer bezels but with a notch.

The Apple M1 chip powering the MacBook Pro 13 is already a powerful chip, but Apple took it up a notch with the M1 Pro and M1 Max chips.

What this means is that the new M1 Max and M1 Pro are significantly more powerful than the M1, which is beneficial for pro applications like heavy photo, sound, or video editing.

One of the new technologies that Apple’s M1 chip brought to the table is the Unified Memory architecture, which integrates the RAM in the SoC, allowing the CPU, GPU, and other components of the chip to efficiently access data from the memory without the redundancy, which in turn improves performance.

That technology is still present in the new MacBook 14 and 16, but with bigger capacities starting at 16GB up to 64GB. The same can be said with the SSD as it starts at 512GB up to 8TB.

Connectivity and other features

Apple gave the MacBook Pro 14 and 16 more “pro” features compared to the MacBook 13, which is evident in the connectivity department. It has three Thunderbolt 4 (USB-C), an HDMI port, and an SDXC card slot, which is great news to users who don’t want to use dongles. Its 3.5mm headphone jack also got an upgrade and now supports high-impedance headphones for those who want better audio monitoring while working on their projects.

The speakers got an upgrade, too, and now has a high-fidelity six-speaker system with force-canceling woofers, Dolby Atmos, and support for Spatial audio. FaceTime HD camera was also upgraded to 1080p and is now housed in a notch. What’s probably missing here is the Touch Bar, which is only available on the MacBook Pro 13.

When it comes to charging, the MacBook 16 supports the 140W USB-C power adapter, while the 14 can support the 96W. The 13 settles with the 61W adapter.

If you’re just a casual user, I think you’re better off getting the MacBook Pro 13, or even the M1-powered MacBook Air. But if you’re a creator or a professional who can put the power of the M1 Pro and M1 Max chips to use, then the MacBook Pro 14 and 16 are the best you can get right now.