Given their trajectory in just the last couple of years, realme was always going to end up releasing their own laptop at some point. However, the realme Book’s arrival this year has caught us by surprise. It’s either because it came earlier than we expected, or perhaps because it launched at just the right time. Whichever one it is, it’s a pretty darn good attempt from the brand. Read on to find out why. 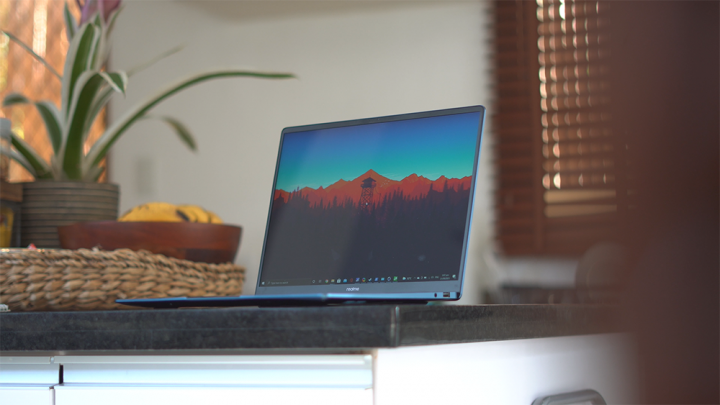 I’m not going to sugarcoat it — the realme Book is what we consider a MacBook clone, at least in terms of design. Now for me, there’s nothing inherently wrong about that, since this typically means we get a very nice CNC-milled aluminum body that’s slim, premium, and easy on the eyes. For its under PHP50k price range, it’s definitely a welcome anomaly. 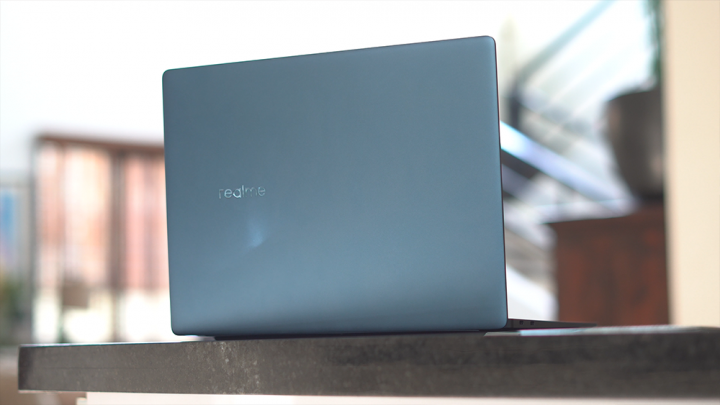 The MacBook “inspiration” doesn’t just stop with the overall build though, as the keyboard and large trackpad were also taken. Again, there is absolutely nothing wrong with this as trackpads of this size are a joy to use and would be considered a premium feature. However, the keyboard isn’t without its problems. While the layout is actually pretty good, there’s a lack of Home, End, Pg Up, and Pg Dn keys that some users may find handy in their day-to-day work. I also wouldn’t say it’s exactly comfy to type on. The keys require quite a firm tap to register, with a moderate travel distance. This poses no problem for aggressive typers, but if that’s not you, then some adjustment is necessary. 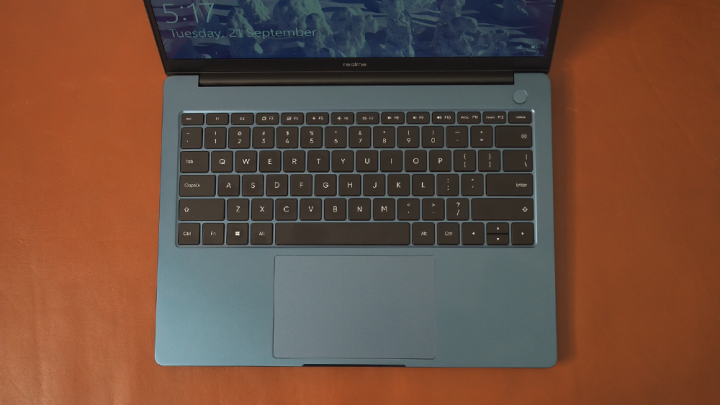 The I/O is also lacking. Our review unit is the i5 variant, we get one Thunderbolt 4, one USB-C 3.1 Gen 2, one USB-A 3.1 Gen 1, and a combo audio port. We believe realme should have really included at least one HDMI port since this is the kind of notebook that would be used in settings that may require tethering to a projector for presentations, or perhaps to a second monitor. 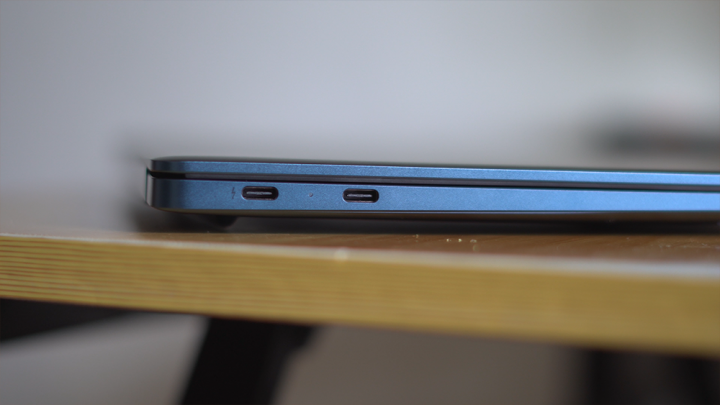 You might be able to get away with it with the i5 variant since the Thunderbolt 4 port can output a DisplayPort signal via Type-C to supported displays. However, the i3 variant does not have Thunderbolt 4, meaning a dock or adapter is definitely required. It also would have been nice if there was at least one more USB-A port, allowing users to plug in more than one peripheral device at a time. 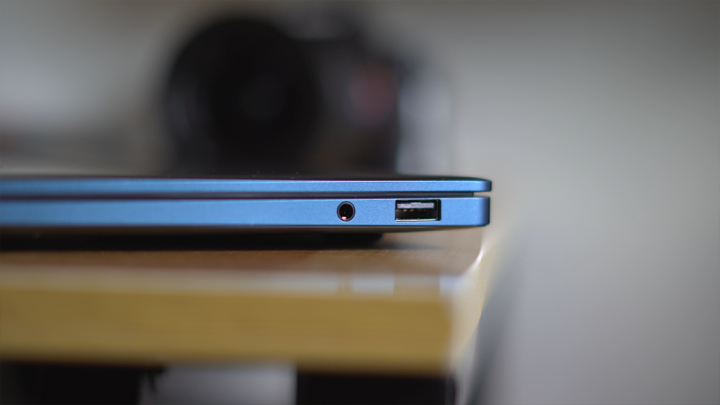 The hinge stiffness I wrote about in our hands-on has started to quickly resolve itself, as after more than a week of usage, a one-finger lift is starting to be possible. Same thing with my initial thoughts about the trackpad is a little grippy. As suspected, exposure to the natural oils present in the skin has slicked it up significantly.

All that being said, realme Book’s design is not a first attempt from the brand. It hits the right notes with its large trackpad, sharp looks, and outstanding build quality. There are a couple of things they can improve on, but these problems can be more easily implemented. The true challenge for realme would be to stray further away from the MacBook clone look, and spice things up with some originality.

The realme Book packs a 14-inch IPS display with a 2160 x 1440, which makes for a pretty tall 3:2 aspect ratio. This is definitely one factor the realme Book has that really shakes things up. A 2K display at this price range is more than a welcome treat. 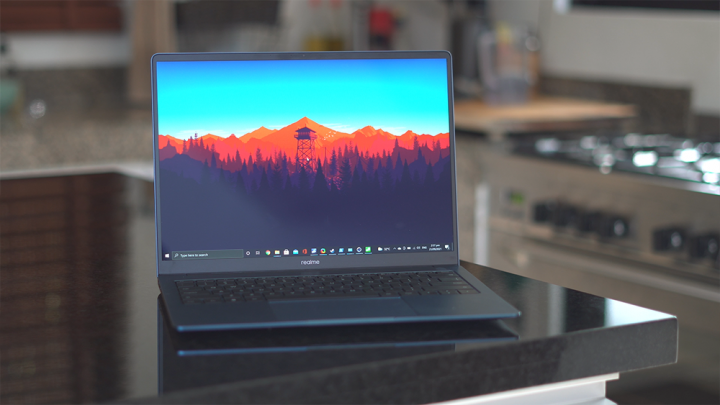 It’s very sharp, which makes working with text and watching movies quite comfortable. The taller aspect ratio is also wonderful for work-related tasks, as the extra vertical screen real estate does help a lot. The colors are passable but definitely aren’t perfectly calibrated out-of-the-box, which makes realme’s 100% sRGB color gamut claim almost meaningless. This doesn’t matter much for most things but is something to keep in mind for anyone planning to do any serious photo or video editing.

It’s a lovely display with sleek bezels thanks to that 90% screen-to-body ratio, but if it had just one more thing, it would have really blown my mind. That missing thing is without a doubt, touch screen capability. A 2K resolution screen with a touch screen may be a bit of a stretch to ask for, but what about 1080p with a touch screen? It doesn’t seem all that unreasonable that realme provides multiple display configuration options, which is something I hope they do with the next realme Books.

As for the speakers, they’re pretty decent as long as you don’t expect a lot out of them. The dual HARMAN system has its grills at the bottom of the laptop, which allows them to really boom when placed on a smooth flat surface. However, especially at high volume levels, a lot of clarity and detail is lost. The bass isn’t booming either, so what you end up with is a sound that’s loud, but lacking a strong punch and delicate touch. For casually watching movies or making video calls though, they’ll do just fine.

Nestled in the screen’s top bezel is a 720p webcam that leaves a lot to desire. First of all, it doesn’t even support Windows Hello, which would have been a nice complement to the realme Book’s fingerprint scanner. More importantly, the camera’s quality is straight-up horrible. It’s grainy, very soft, and even with decent lighting, it struggles to find the right exposure. 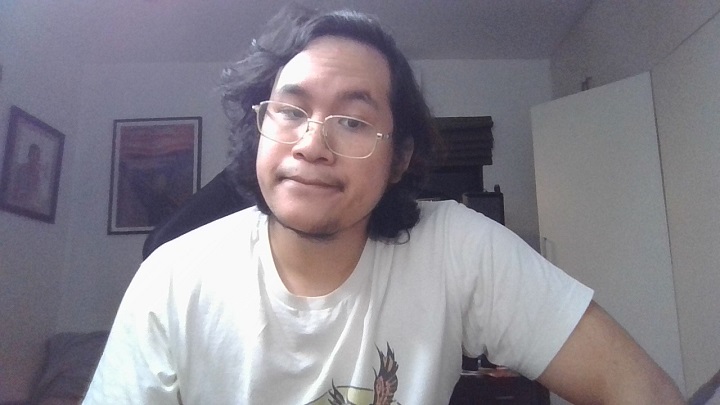 Sample photo from the realme Book’s webcam: Me looking unimpressed.

Since realme is primarily a smartphone company, we sincerely hope they’re the ones who end up taking the initiative to actually use a good smartphone-grade camera sensor as a laptop webcam. There’s just no more excuse at this point for laptops to have terrible webcams when we’re right in the middle of an era where video calls are a huge part of our lives.

Our review unit comes with an Intel Core i5-1135G7 CPU with Intel Iris Xe Graphics, along with 8GB Dual Channel LPDDR4X RAM at 4266MHz, and a 512GB PCIe SSD. As we found out in our hands-on with the realme Book, the RAM is soldered on, rendering it impossible to upgrade to 16GB or more. Again, another situation where realme should have provided more configuration options. I mean, just because there isn’t an i7 variant — which I also think there should be — it doesn’t mean 16GB of RAM should be out of the question. 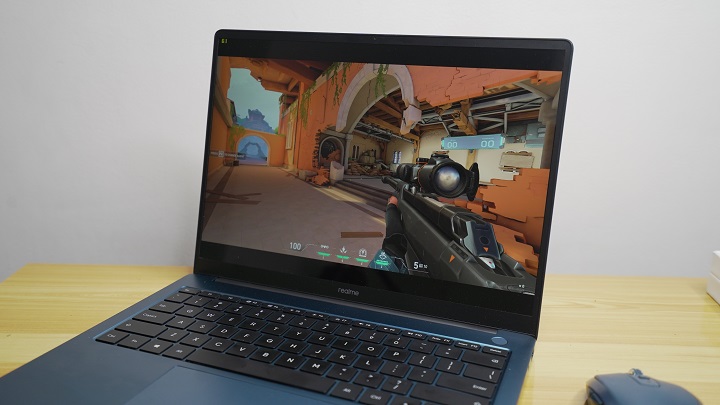 In any case, this i5 variant proves to be a decently powerful machine, especially for a laptop that’s this sleek and slim. Some amount of multitasking is still possible with the 8GB of RAM, loading times are snappy thanks to the fast SSD, and the CPU is powerful enough for more than just productivity tasks.

We tested the realme Book with “basic” 3D games such as Valorant and Minecraft (Java), and at 1080p with mostly low settings, we can definitely achieve frame rates above 60FPS. There are frame drops from time to time, though. And for creative tasks, 1080p video editing and some light photo editing are possible, though may be held back by the low amount of RAM and the fact that the i5-1135G7 is only a 4C/8T CPU. 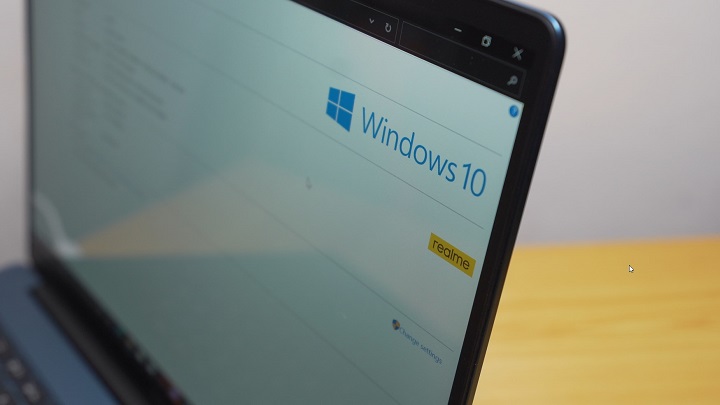 For the OS, we get Windows 10 Home. There is also a promised upgrade to Windows 11 when it comes out, which we’re definitely eager to test out. The software aspect is another instance where realme could use a little more fine-tuning. For instance, only the ‘Balanced’ power plan is available in the control panel, and none of the Command Prompt or Windows PowerShell fixes were able to solve this. This may contain potentially unused performance that could have improved the raw numbers. 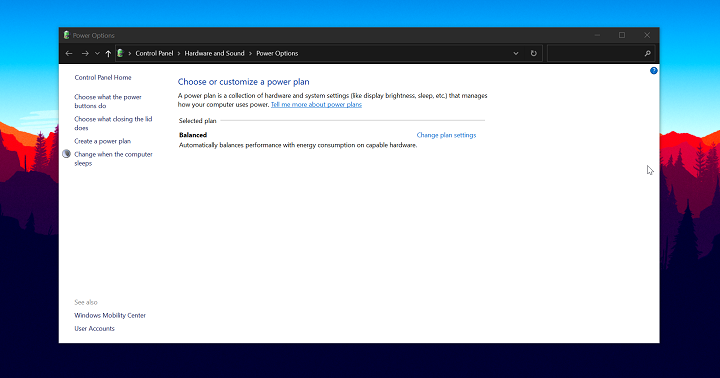 Another thing is the lack of any custom software. Now, while I can appreciate the absence of honestly unnecessary bloat, it would have been nice if the Realme PC Connect application already came pre-installed, and actually supported any realme smartphone. Currently, only the realme GT series is supported.

For power, the realme Book comes with a 54Wh battery with support for 65W fast charging. The brand claims 11 hours of offline video playback, which doesn’t really mean a lot to us. In terms of actual usage, we were able to get around 6 hours on a single charge. This is active usage, including having a decent amount of tabs open on Chrome, video playback, and some light photo editing. The 65W charger is a great companion as it charges the laptop pretty darn fast, enabling literally all-day use.

As for connectivity, this i5 variant includes Wi-Fi 6 and Bluetooth 5.2, allowing for a smoother and faster connection to network and audio devices.

The realme Book is not the perfect machine, but it certainly gets a lot of things right. It manages to fit in a 14-inch 2K display, a large trackpad, powerful silicon, and decent battery life. It houses all of that in a sleek and sexy package, while in an insanely affordable price range. 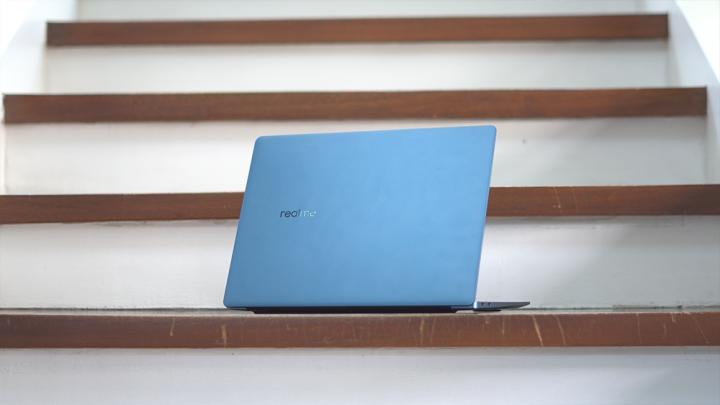 With an SRP of PHP37,990 for the i3 version and PHP47,990 for the i5 version, the realme Book is definitely now one of the most attainable premium laptops in the Philippine market. I was initially expecting the prices to be slightly lower, though you still generally get what you’re paying for with the actual prices.

This is genuinely a good first attempt from a company that was never known for laptops, and if they can learn from the shortcomings of this pilot release, then they can end up being a force to reckon with in the years to come.