The future is here. That is the first thing that comes to mind when I first laid eyes on the ASUS ROG Flow Z13. The dream of having a small form factor device that can actually game on the go, and also be your main gaming device when you get home is finally real.

This device is cutting-edge to say the least. It really shows how far technology has come the past few years. Who needs to sacrifice performance with portability now? This device shows that you can do both, in such a beautiful and small size. 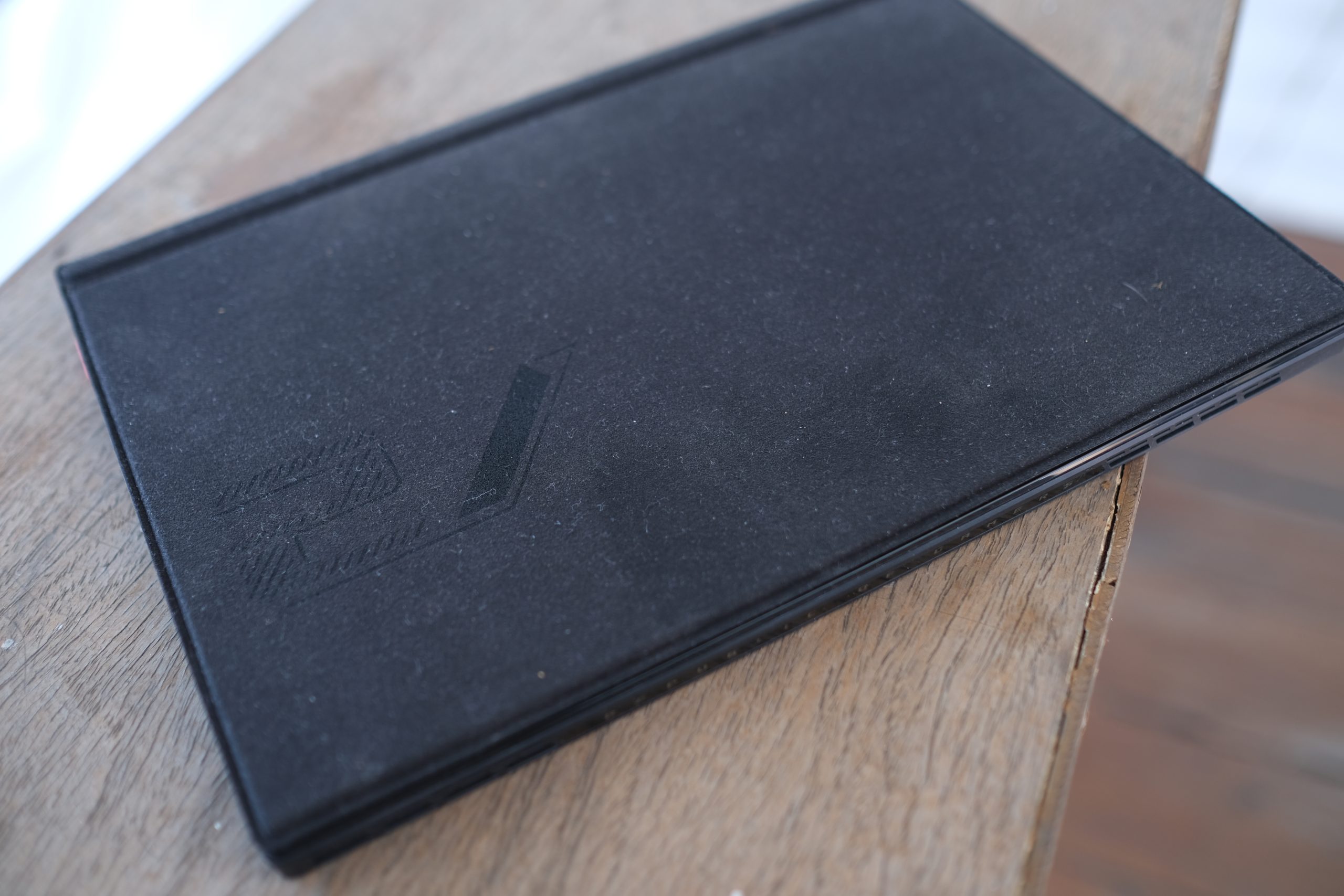 The ROG Flow Z13 screams premium in every single way. From the tablet/screen itself to the premium feeling keyboard/cover, everything just feels well thought out and made of high quality materials. The tablet itself is very well made, it feels like one piece of solid metal. The back is made of premium aluminum and isn’t shy about showing that it is a gaming device. There is a window that shows a part of the motherboard that has RGB lights that you can configure and change to your liking. There are also vents, presumably, to help with heat dissipation especially for a product this small. 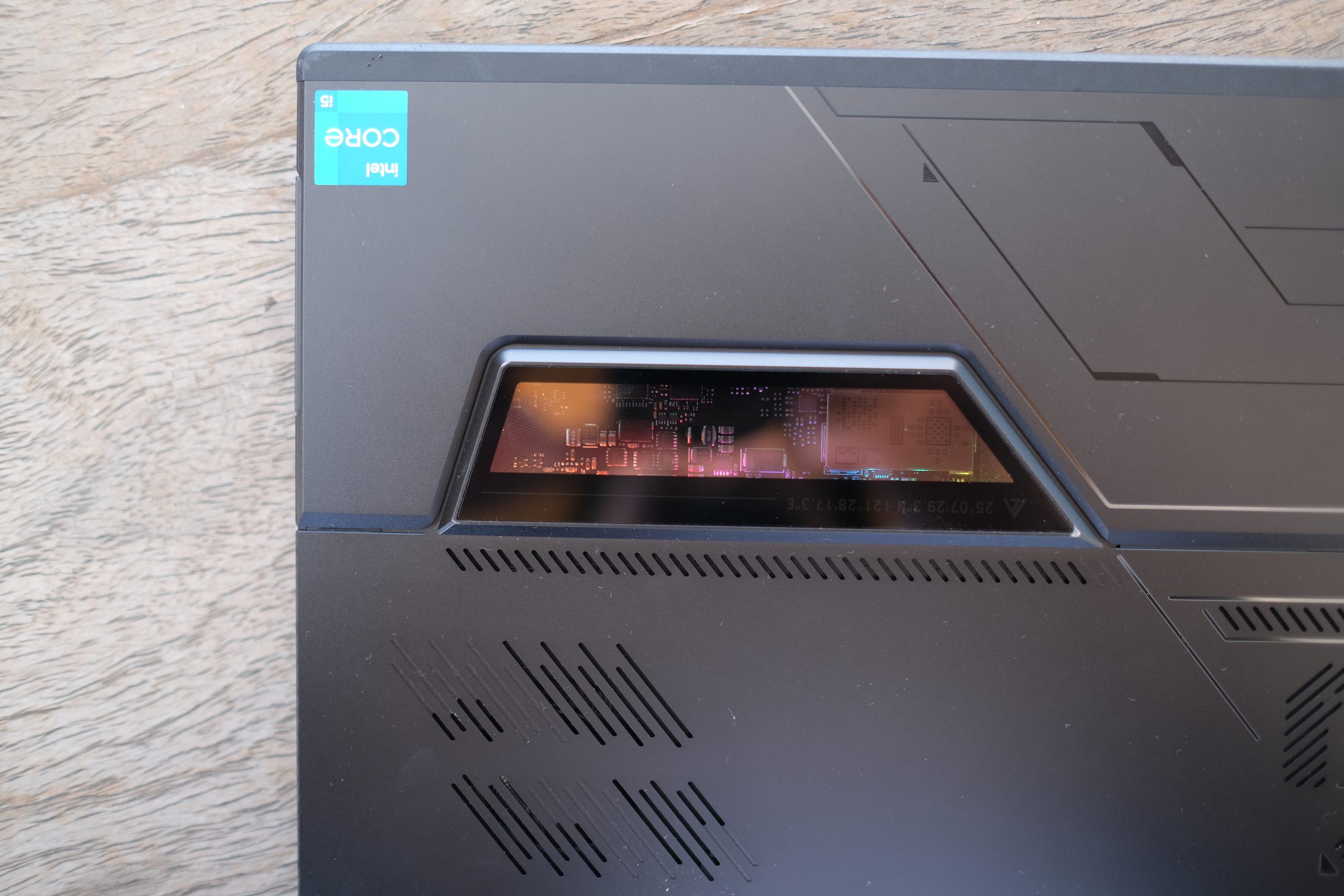 At the front is the beautiful 13.4-inch display with a 1900 x 1200 resolution. The bezels are barely there considering this is a full sized tablet. On top of the display is the 720p webcam, below is the magnetic connector that allows you to dock it to the keyboard cover. The screen is very bright, and is very fast as it comes with a 120Hz refresh rate.’ 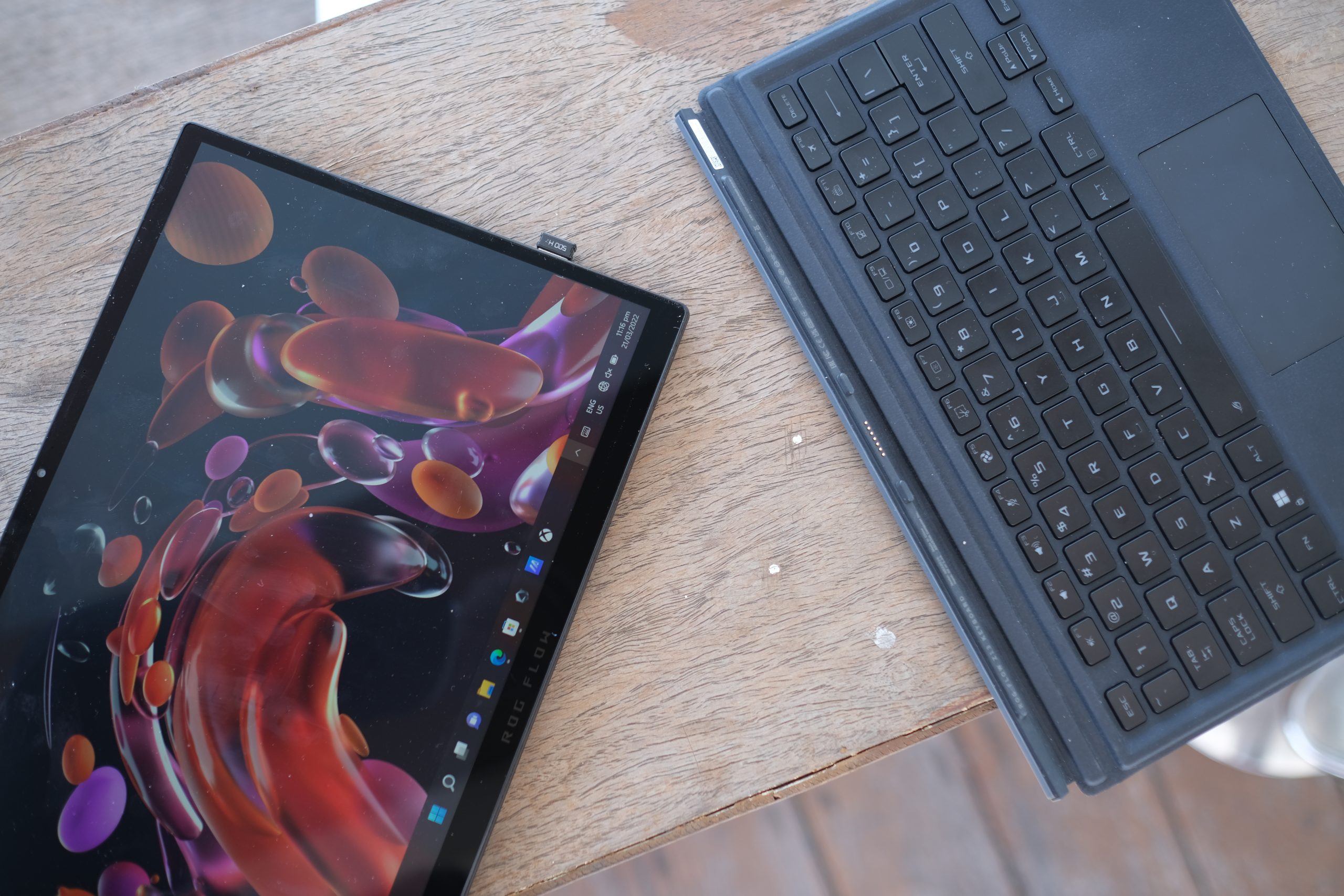 Speaking of the keyboard cover, the ROG Flow Z13 comes with one that has a felt like, or alcantara like finish that makes it seem you are holding a journal or a book. When you open it up though, the finish inside feels like faux leather that is of very high quality. The keys are super easy to type on, I wrote this hands-on using the keyboard and I never felt lost in using the ROG Flow Z13’s keyboard. Key travel is great and typing on it feels great as well. I tried other similar devices that offer keyboard covers and it’s pretty easy to say that this one is up there when it comes to typing experience. It also comes with the entire gaming experience one would expect with a ROG device. The keyboard is RGB backlit and can be controlled via Armoury Crate. It is also complete with all the function buttons you would need from a device for work and play. 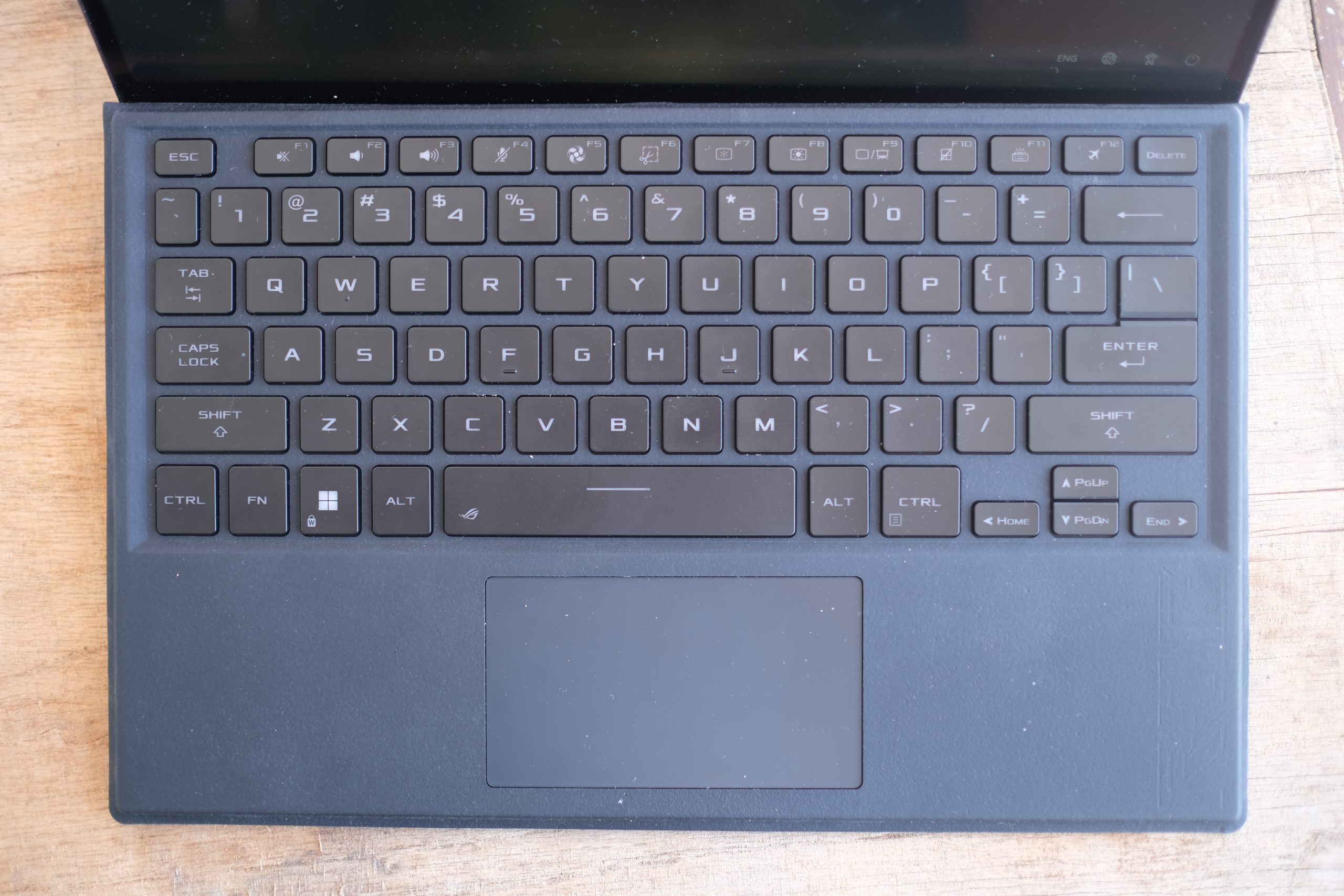 Let’s first start with this display. Again, it comes with a 120Hz refresh rate that is very responsive and fast. The display is touch enabled so it can definitely be a full fledged tablet when you want it to be. Watching TV shows on the device or YouTube videos was not a problem. The screen gets really bright and with its big size makes it very immersive when consuming multimedia content. The unit we have here to try is powered by an Intel i5-12500h mobile processor and is easily one of the more powerful mobile processors you would find inside a device this compact. My day to day tasks of office work, light video editing, audio editing, and gaming was a breeze when using this laptop/tablet. I never found anything too slow to use and generally everything was very snappy.

I love how fast the device boots up thanks to the fast NVMe SSD inside this device, which by the way, is replaceable in case you want to increase your storage in the future. Apps open up very quickly and I had no problem having multiple programs and tabs open thanks to the 16GB of RAM inside the device. For graphics purposes, the device comes with Intel’s Iris Xe integrated graphics. For an integrated GPU, this one doesn’t disappoint, especially if you know how bad integrated GPUs were years ago. I was actually able to play some popular titles at over 60FPS just using this GPU. Valorant was generally very smooth and I was constantly over 80FPS at all times, while Fortnite ran at 60+ FPS also. I tried games that were a bit more demanding like The Witcher 3: Wild Hunt and I was hitting 45+ FPS at 1080P medium settings, which really impressed me because of how demanding the game is even if it is a few years old. 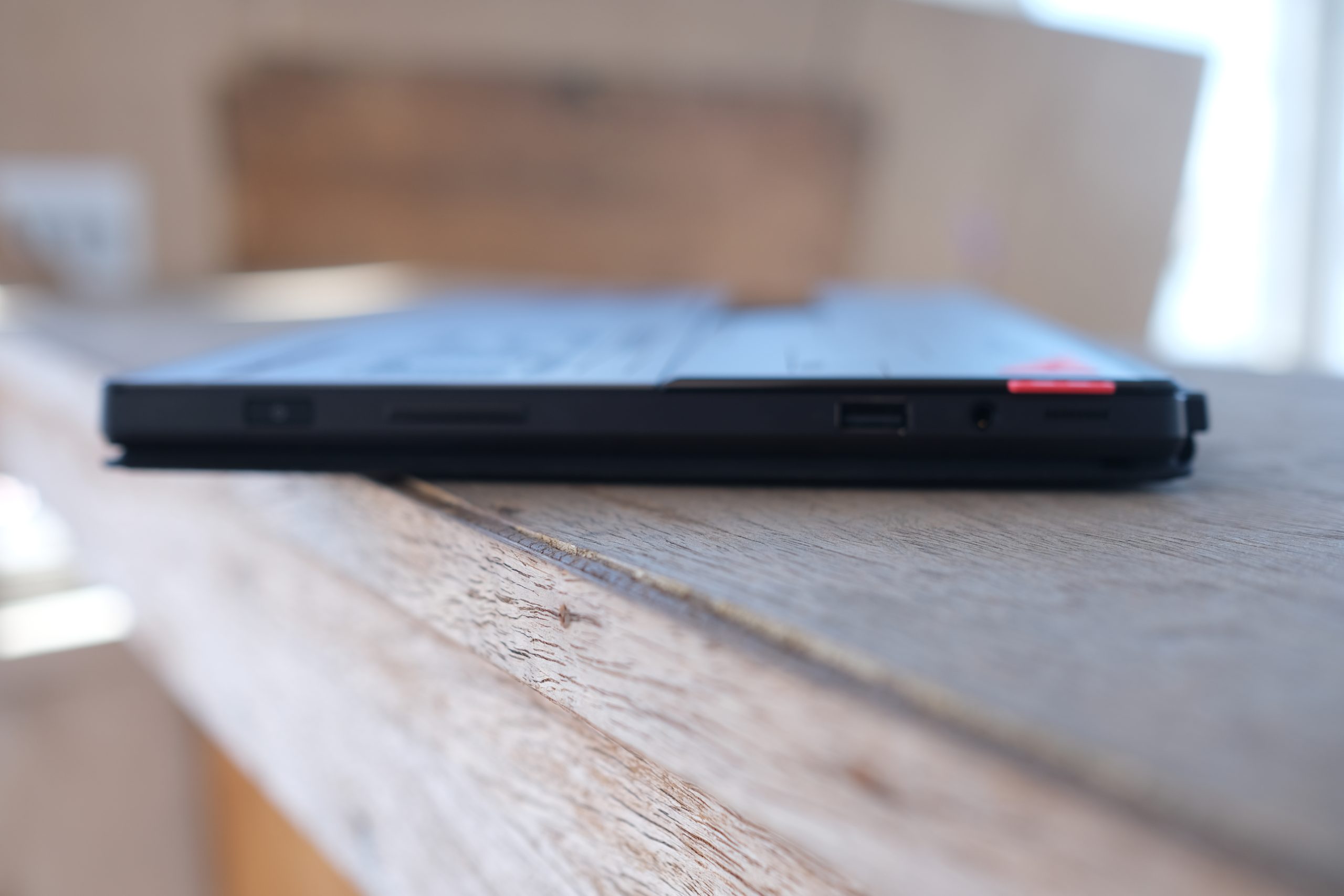 It isn’t a ROG device though if it can’t game seriously, and that’s when the ROG XG Mobile comes in. This gaming dock is a separate device that is powered by an NVIDIA RTX 3080 mobile GPU. It is just a bit larger than my hand but boy, the power inside of this thing is impressive. Paired with the 12th generation Intel processor inside the ROG Flow Z13 and this becomes a serious competitive gaming device. Safe to say that whatever game I tested on the tablet after docking it to the XG Mobile played at almost over 100FPS. From CoD: Warzone, to Far Cry 6, everything was a breeze. 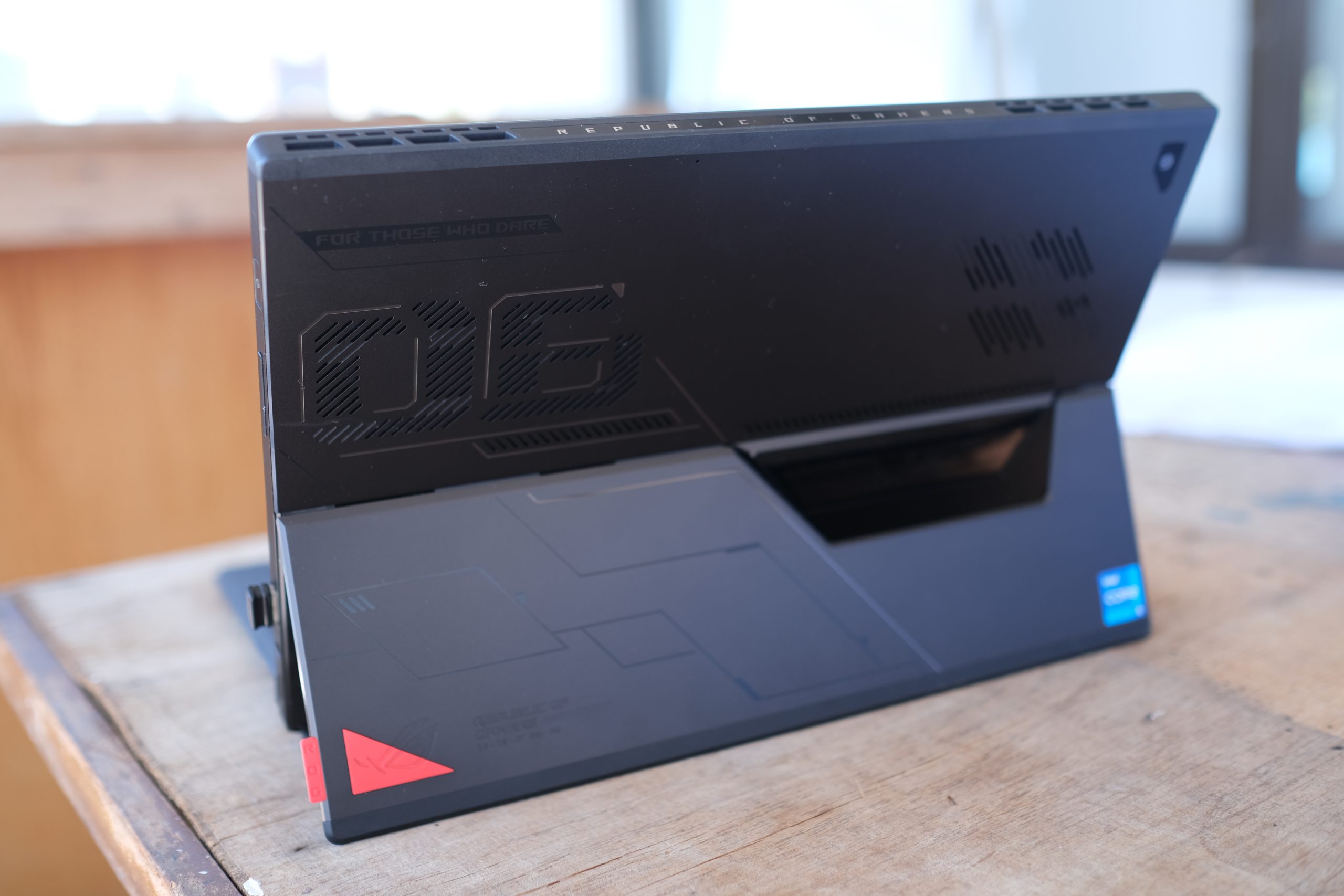 The XG Mobile station also has all the ports that you would need, it’s like a small form factor desktop PC on its own, with multiple USB ports, an ethernet out, HDMI port, and a DisplayPort connector.

What impressed me the most out of all of this wasn’t the gaming performance, I’d expect that of a device powered by a 3080, but it was the temperature of the tablet. It never became hot, whatever they did here just works. It could be lower power to the GPU or whatever, but it never felt like it got hot which is really, really impressive.

In our limited time with the ROG Flow Z13, the device proved itself as something from the future. I still can’t wrap my head around this device, how can we have something so small and portable be so powerful? I can use it as a full-fledged laptop, then turn it into my office/work device then immediately dock it to the XG Mobile to become a full-fledged gaming station. I get it, this device, along with the XG Mobile station won’t come cheap. It’s never about that though, to be at the cutting edge of technology, most devices won’t be. But having a powerful 2-in-1 device and a pseudo desktop in a small form factor that you can bring around can be worth that premium. 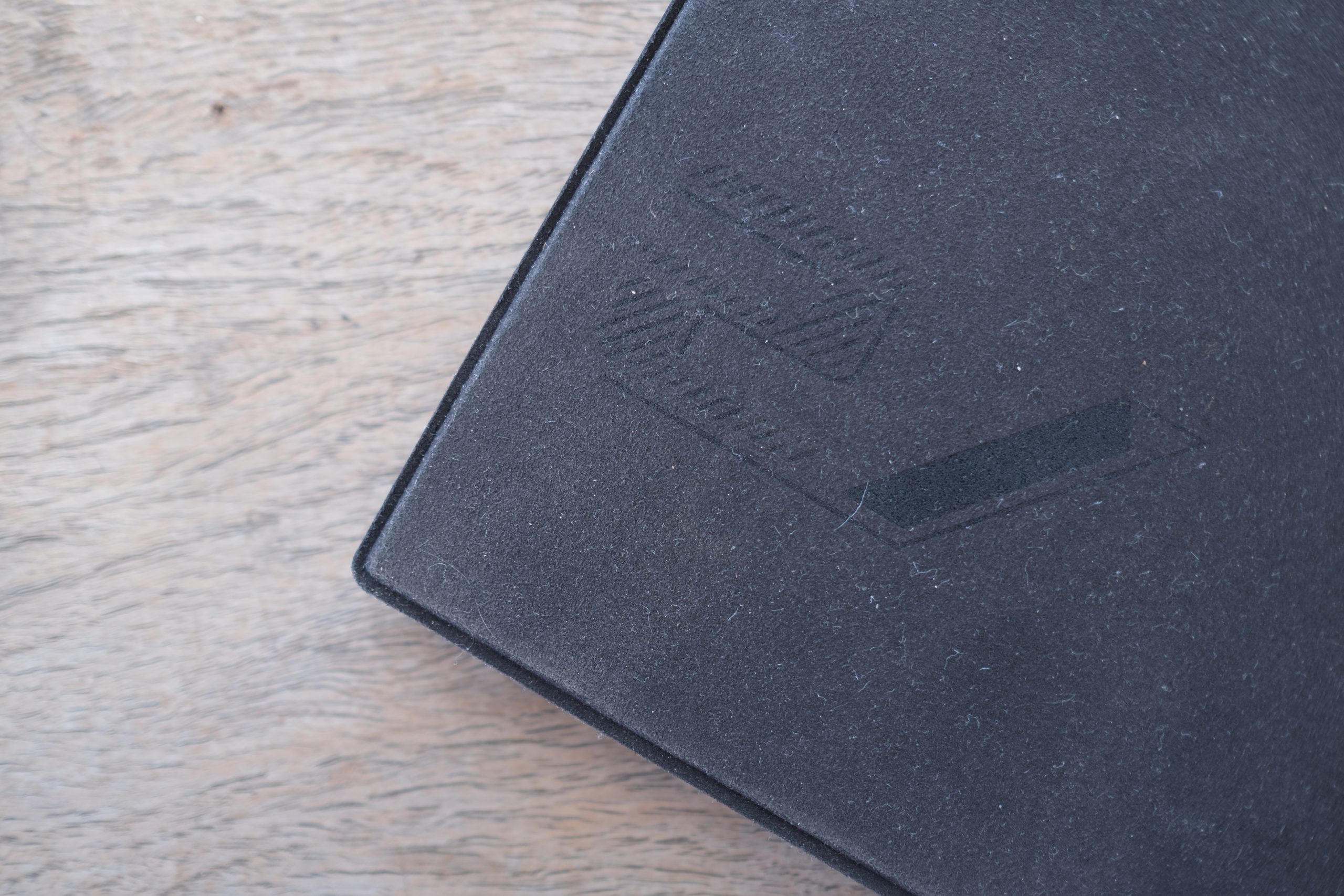 The ASUS ROG Flow Z13 is something that we never thought could exist, but it’s here and it’s amazing to say the least. This may be the beginning of something in the world of tech and ASUS may just be getting started, but for what it’s worth, it’s a helluva start.

The ASUS ROG Flow Z13 is priced at USD 1,799.00 with local availability yet to be announced so stay tuned.