Microsoft just revealed that they applied for a patent that features wearable glass technology, similar to Google’s Project Glass.

Just recently, Google showcased Project Glass and it wowed the world. It was even thought to be impossible and unbelievable. Google even engaged in fashion shows just to attract more people.

Microsoft takes a different approach. Project Glass is meant to be used whether while in motion or while staying in place; Microsoft’s patent focuses on giving out information while watching a concert, a sports game or just any show you’d watch. The company just started making their own hardware such as the Surface, so it wouldn’t be a surprise if a Surface phone or SmartGlasses (Xbox reference) came out sooner or later. For the meantime, the patent application could give us a clue that the Redmond giant could be indeed working on their variant of Project Glass.

While the future of wearable tech is still far away, it is good to see innovations coming out from the big guns. When these products come out however, we’d bet that prices would soar through the roof. 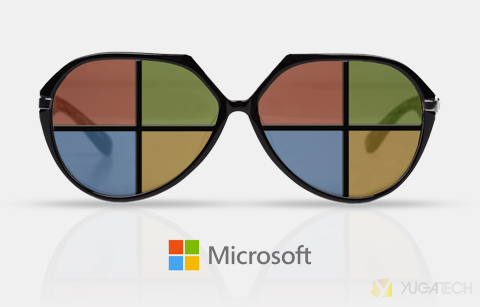 On the other hand, we still think that it wouldn’t be advisable to use these kinds of technology in the Philippines (not now anyway) as wearable tech might be easy to snatch.

Nevertheless, we’re getting there. In a few years, maybe we’ll get to see Apple’s version of the tech; iGlass anyone? (Pun intended)

Note: Microsoft Glass image above is just a YugaTech render.