After almost nine months after our first encounter, ASUS Philippines was kind enough to lend us the FonePad Note FHD 6 for review. Check out our thoughts about this six-incher in our full review after the jump.

The FonePad FHD Note 6 doesn’t look or feel like a premium device right on the onset, at least not from the design standpoint that is. This is mainly due to the plastic make of the handset, not to mention the rather thick bezels that border the phone’s huge, 6-inch display. 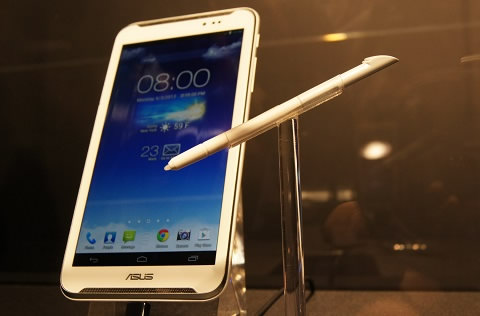 The handset’s flanks and its two speaker grills are treated with a chrome-like finish which, in part, breaks the monotonous design and paintjob of the handset. Unfortunately, these minor design accents don’t help the FonePad Note FHD 6 with its cause as it failed to redeem the handset from its plastic-y appearance.

As a consolation though, the handset feels very solid in the hands and has reassuring heft to go along with its robust frame. One-hand-operation is possible, provided that you have a fairly large hand. But in most cases, this gargantuan smartphone is best used with both hands. 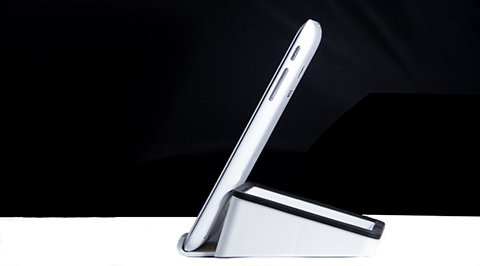 Now let’s get down to the FonePad Note FHD 6’s external components. Majority of the real estate at the front is occupied by the phone’s 6-inch display which is sandwich in between the two front-mounted speakers found at the top and bottom portion of the handset.

There’s a flap on the left side of the huge handset which hides the Micro-SIM and Micro-SD card slot from plain sight. Over to the other side is a trio of physical buttons for the power and volume. The phone’s underbelly is relatively plain. It has a glossy finish to it and the bottom part is peppered with the usual markings you typically see on handsets with non-removable back panel.

Apart from that, the only other notable components on the backside are the 8MP rear camera and a tiny compartment that houses the Wacom Digitizer.

ASUS may have failed to hit all the right spot in the design department, but they made sure that they capitalize on the FonePad Note FHD 6’s main feature – its DISPLAY. Apart from its sheer size, the handset’s screen also offers 1080p resolution, decent viewing angle and remarkable color reproduction. 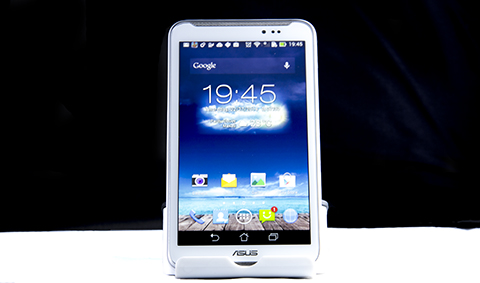 In addition to its commendable screen, we also like the sound coming out of its two front-mounted speakers. This makes the handset an ideal companion for watching movies whenever you’re away from your idiot box.

Just like the other ASUS devices that came before it, the FonePad Note FHD 6 also runs on a skinned version of Android. The alterations that the company made on the UI is relatively subtle, and although it’s not the best looking custom UI we’ve seen in the lot, it’s most certainly not the worst.

In terms of the native software, most of the preinstalled apps on this phone look and behave the same as the ones on devices running on stock Android. Thus, both seasoned and first time Android users should have no problems navigating their way through different menus. Installing and running apps from the Google Play Store was also a breeze. The engine at the core of this mammoth handset handled the apps quite well and without breaking too much sweat while doing it.

The FonePad Note FHD 6 is equipped with an 8-megapixel camera at the back coupled with an HD camera at the front. Although that doesn’t sound much on paper, we actually got some pretty decent shots from both of these snappers.

Sadly, despite having a relatively fast aperture (f/2.0), a built-in flash would’ve certainly come in handy for shooting in low-light conditions. Here are some of the shots we’ve taken using the FonePad Note FHD 6’s rear camera.

Intel-powered mobile devices come few and far in between, but whenever we get to use one, we’re reminded of how underrated these processors are despite of its ability to provide respectable performance and handle tasks efficiently.

We put the FonePad Note FHD 6 through its paces using our usual benchmark tests and here are the results we got: 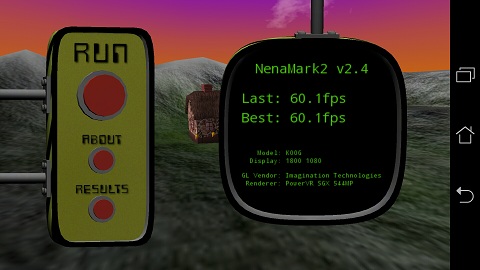 Connectivity and Call Quality
Unfortunately, despite of its decent performance, the handset’s chipset doesn’t support LTE connection. Although that may not be too big of a deal for some, it may potentially turn off some prospective buyers from getting this handset from the shelf.

Call quality, on the other hand, is superb to say the least. We never had any issues taking and receiving voice calls when we were using the FonePad Note FHD 6 as our main device. Our voice, as well as the voice of the people we’ve talked, came out clear and very audible.

Apart from its outstanding display, another thing we like about this gargantuan handset is efficient use of its resources. By and large, mileage has never been an issue with Intel-powered devices, especially when it’s paired with a sizeable battery pack like the one found on the FonePad Note FHD 6. The screenshot you see above was taken after we ran our usual battery test (test parameters can be seen below). As you can see the handset’s 3200mAh battery lasted for a full seven hours before it asked for its USB charger which is rather impressive considering it has a fairly large display with 1080p resolution.

Of course this review wouldn’t be complete without mentioning (at least in passing) one of the FonePad Note FHD 6’s main features – the Wacom Digitizer. In all honesty, we didn’t really pay too much attention to the accessory during our time with the handset, but in rare times that we did use it, we have to say that it does run like clockwork. 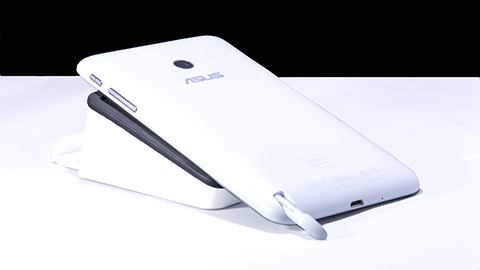 The synergy between the display, the fancy stylus and the app/s that makes use of it is truly commendable and although it does take some “getting used to” before you can fully maximize this extra feature, the stylus can be very useful once you got the hang of it.

Despite of the minor missteps we pointed out earlier, like the lack of built-in flash and its uninspiring design, we think that the ASUS FonePad Note FHD 6 is still a good buy at Php19,990.

Its gorgeous 6-inch, 1080p display panel alone is worth more than half of the price of admission, not to mention it has other great features on the side like respectable battery life, a pair of front-mounted speakers and a Wacom Digitizer that should make it easier to forgive some of its shortcomings.

What we liked about it:
* Excellent battery life
* Huge and vibrant display
* Above-average sound output from two speakers

What we didn’t like:
* No Built-in flash
* Cheap design