Battle of the Android Flagships: What's the Best Spec'd Phone of 2016?

Battle of the Android Flagships: What’s the Best Spec’d Phone of 2016?

Mostly, if not all the major players, have already released their flagship phones for the year 2016. Some of them are already available in the market, and some of them are yet to hit local stores soon – but that won’t stop us from comparing all of their specs in this comparison. 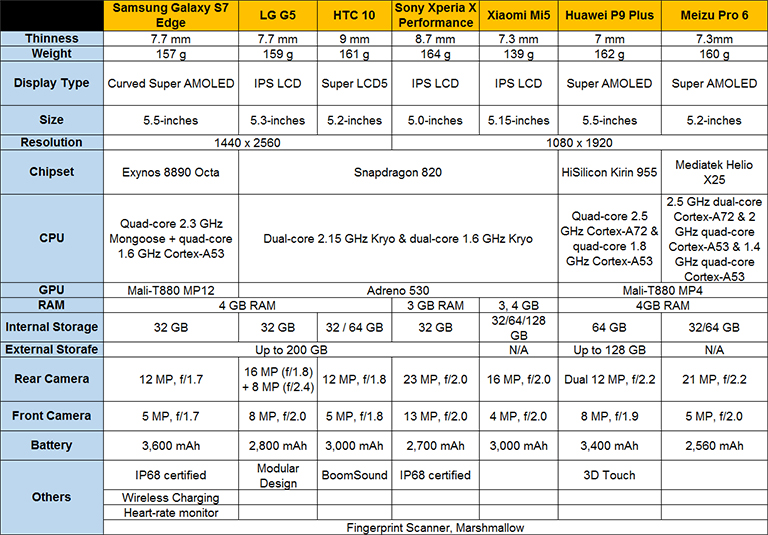 The Samsung Galaxy S7 Edge seems to be the most well-rounded among the competition. It’s thin, light and it packs a huge curved Super AMOLED screen with very powerful internals. While it has the lowest megapixel count in the comparison, it does have the lowest aperture. It also has the largest battery, and it comes with features like IP68 certification, wireless charging and a heart-rate monitor.

The LG G5 on the other hand is another well-rounded smartphone, but it doesn’t seem to be best at anything on paper. It’s certainly high end with its hardware and its features, and it’s one of the two smartphones here with a competitive dual rear camera setup, but the main thing that will attract most buyers here is LG’s modular design.

Newest among the bunch, the HTC 10 is also no slouch in terms of internals, but then again, compared to the rest of those in the list, the HTC 10 is nothing special on paper except for its BoomSound speaker setup; the HTC 10 leaves no holes for lacking, but it’s also just a “me too” smartphone that represents the best from HTC.

Sony’s flagship phone, the Xperia X Performance, on the other hand is on the lacking side in terms of specs; it only has a 1080p display and 3GB RAM. Aside from that, mostly everything is on par with the competition. It’s also one of the two smartphones in this comparison that is IP68 certified.

Xiaomi Mi5 offers fairly flagship internals, especially with its chipset. While it has only 3 GB RAM in some variants, it allows for storage up to 128GB. It doesn’t have expandable storage, it doesn’t have a QHD display and it’s not packing a lot of features and gimmicks. It’s just a fairly well-rounded smartphone in 2016.

The Huawei P9 Plus on the other hand has the second to the largest battery in the table, the other one with a dual-camera setup, and based on benchmarks, arguably a very fast chipset – the octa-core Kirin 995 paired with a Mali T880 MP4 GPU. While it only has a 1080p display, it’s also the only one in this list with a pressure sensitive screen like 3D Touch.

Finally, the Meizu Pro 6 is the only one in the list with a deca-core processor, but whether or not it performs exceptionally is yet to be seen. It has its fair share of flagship internals in almost all aspects, but just like the Xiaomi Mi5, it doesn’t offer any extra features or gimmicks; it’s just another well rounded smartphone in 2016.

So, who wins? Quantitatively, to us, that would be the Samsung Galaxy S7 Edge, but people have varying priorities too. LG has the modular design, Huawei has 3D Touch – and they both have dual-camera setups. HTC has the BoomSound speakers, and Xiaomi, Meizu & Sony barely have anything extra to offer.

Now of course, this is all just on paper. It’s still the execution and how much value it can give which will determine what flagship smartphone to get this 2016. We’re all just as excited as you to get our hands on each one of them for our full review.