Cherry Mobile has recently announced the latest addition to the famous Flare family, the CM Flare S2 which is touted to provide better images courtesy of the Sony IMX179 image sensor; the same sensor that powers the Google Nexus 5’s 8MP rear camera. 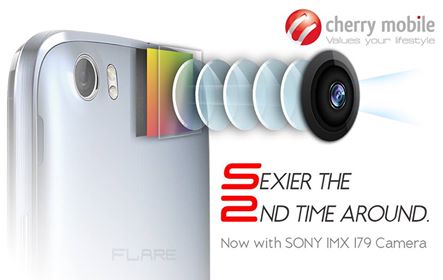 Judging by its specs sheet, we won’t be surprised if the new CM Flare S2 will be priced the same as its predecessor (Cherry Mobile Flare S) which retailed for Php4,499. The only question now is will Cherry Mobile equip their upcoming handset with a more decent battery or will they make the same mistake of putting a lackluster 1,400mAh battery pack to keep the SRP down? What do you guys think?