Cherry Mobile may have a number of affordable devices in the market that some are even identical to each other just to give consumers options. If you have a little more budget and wish to have what the brand can offer now, the M1 is the phone to check out. It’s got a number of firsts from a local smartphone brand plus it’s one of the few devices out there to sport a chipset rocking 10 cores. Here’s our review of the Cherry Mobile M1.

Up front, it has a 5.5-inch Full HD display with an IPS panel that gives out good color reproduction and wide viewing angles. Along with the display is the 8MP front-facing camera with its own LED flash and a couple of sensors. There are two speaker grilles on both ends of the front but they ain’t stereo. One is for the earpiece, and the other is for the loudspeaker. Its right side houses the power/lock button and the volume rocker while the left side doesn’t have any buttons but has the slot for two nano-SIM cards. Unfortunately, there’s none for the microSD card, so space is limited to the internal storage. 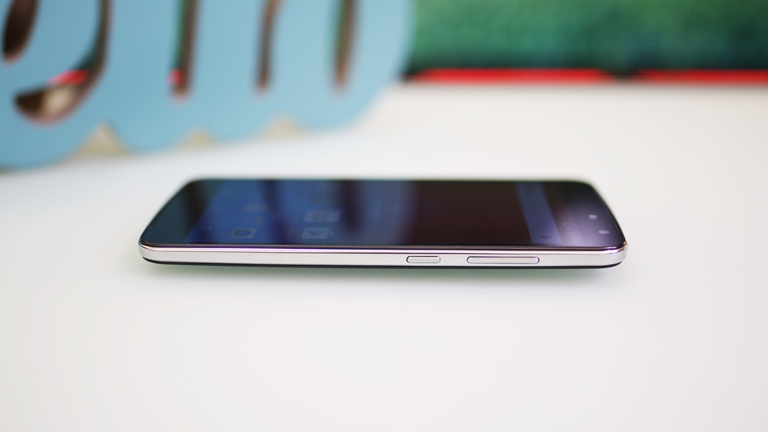 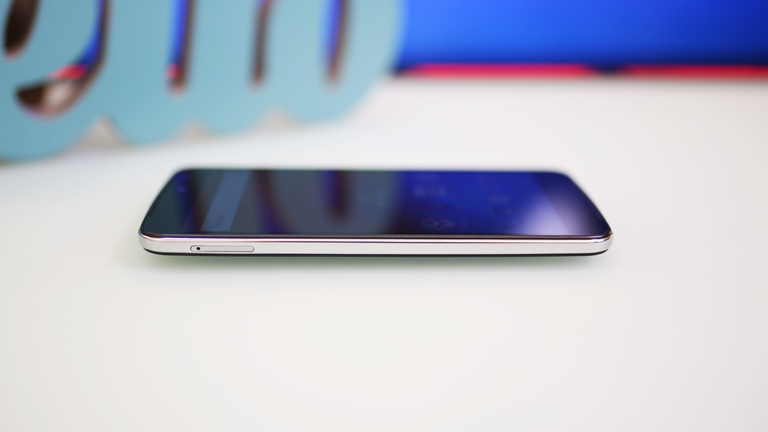 To the top is where the 3.5mm headphone jack for connecting audio peripherals sits. 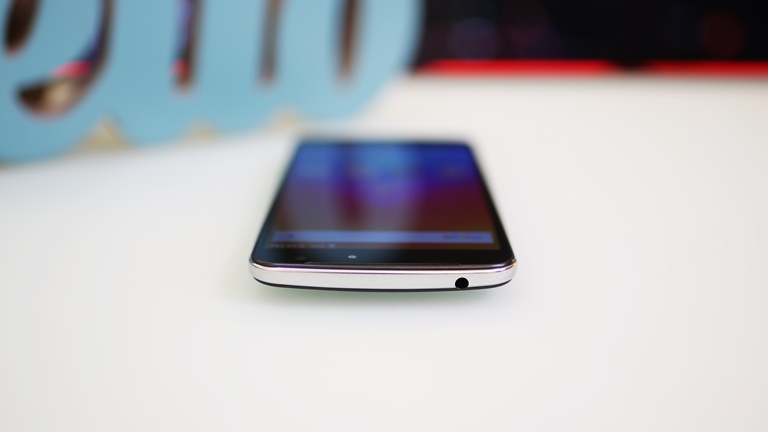 The bottom houses the reversible USB Type-C port that supports fast charging and definitely the first to have it among local brand smartphones. Flipping the phone will reveal the main camera module which has the 21MP Sony IMX230 capable of shooting 4K videos along with its dual-LED flash. There’s also a round fingerprint scanner placed on the back. The rear panel has a brushed metal look but it’s nowhere in the realm of premium materials. When holding the device for the first time, you have the right to question the materials used for a phone costing Php12k since there are better-built devices under that price. The back is supposedly non-removable but with a little force you can actually take a peek inside and it snaps right back again.

The M1 has a 5.5-inch display using an IPS LCD panel with a Full HD resolution or a 401ppi pixel density. For a device that’s considered as a flagship from a brand, there’s nothing exceptionally impressive about as it’s just okay. Viewing angles are good and colors are punchy. MediaTek’s enhancements are on board as well including MiraVision for tweaking the display and ClearMotion video fluency enhancer. As for the speakers, again, it’s only a mono setup. The symmetric grilles up front are misleading upon first look. Sound quality is a downer with low volume and a bit muffled output. Also, hearing sound coming from one side is not exactly a good multimedia experience when watching in landscape mode.

Android 6.0 Marshmallow is loaded out of the box which is currently the latest flavor available since Android 7.0 is still being baked. If you’re already familiar with the generic Android UI, there’s not much to explore here. The common pre-loaded apps from Cherry Mobile are present too. 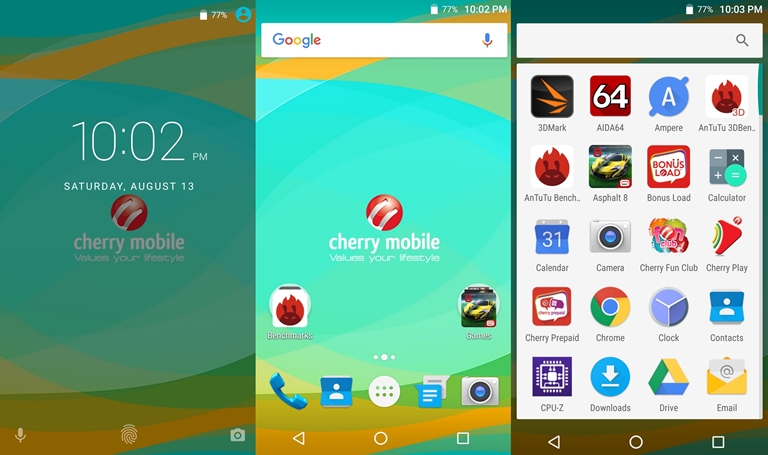 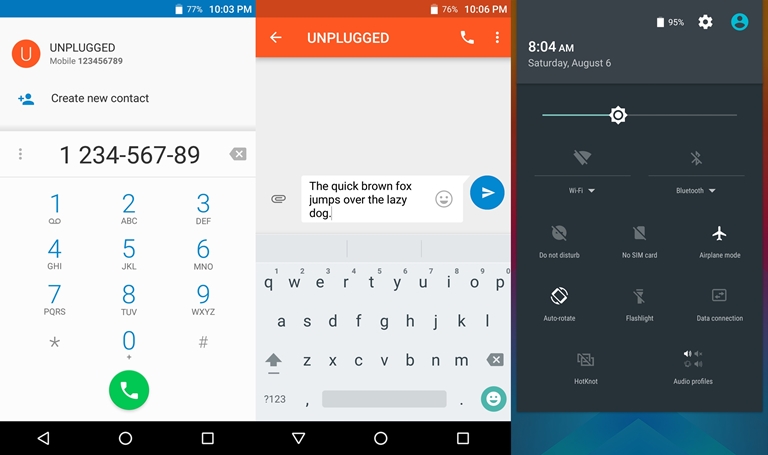 You can customize the UI according to your liking if you know your way to a number of launchers on the Play Store but the stock UI is already capable. What’s annoying about the OS of the M1 is the push notifications of ads suggesting what app to install. If you don’t like seeing them, make sure to turn it off under the Cherry Fun Club app’s permissions.

The camera department is also a major feature of the M1 due to its 21-megapixel Sony IMX230 sensor with phase-detection autofocus. That’s the same sensor used with former Xperia flagships and other high-end smartphone from other manufacturers. With all the megapixel count you can play with, you’d expect to have great shots every time but that’s not the case here, well not always.

The rear camera prowess is burdened by MediaTek’s lame and uninspiring stock camera launcher. While it’s straightforward and fairly simple to use, it could use some tweaks and enhancements when used with a higher end smartphone. Image processing is okay with impressive details when in broad daylight. As with one of the samples below (the 4th one), the shutter can’t quite keep up at times even there’s a lot of light in the area. Indoor shots, on the other hand, can be great if you have steady hands. The front facing camera is great for selfies and the dedicated front flash could come in handy.

As for the video, you can now capture 4K with the M1 but still uses the old .3gp format and not .mp4. As to why, we don’t know exactly. On the bright side, 4K video recording is detailed although nothing stellar in overall quality. Unfortunately, directly uploading the 4K sample to YouTube causes an issue even when we shortened it out.

The M1 is the first smartphone in the country and one of the few in the world to sport the MediaTek Helio X20 deca-core chipset. For the those who are not familiar with MediaTek’s rising fame in the chipset segment, the Helio X20 is the equivalent of Qualcomm’s mid-range chipsets — namely the current Snapdragon 652. They are designed to give optimal performance in the mid-range department. With Helio X20, you have a total of 10 cores divided into three clusters so they don’t have to run all the same time and save up battery. The fastest cores have a maximum clock speed of 2.3GHz. Graphics-wise, we have the Mali-T880 with four GPU cores. To make things short, the Helio X20 is a great choice of chipset if only it was optimized for the device it’s running. The M1 occasionally crashes when in standby, which is weird since it’s not even doing anything heavy. We see this as a software issue than can be patched via an update. For now, early users of the M1 could run into a few software issues here and there. Putting the bugs aside, the M1 provides smooth UI navigation and speedy app launch thanks to its 4GB of RAM. Multitasking is not an issue here even if you keep some tabs open for a long time. From basic apps to intensive gaming, the M1 can take it. Even NBA 2K16 runs reasonably smooth on maximum settings. Putting the graphics down by a bit makes everything better.

Here are the benchmark scores of the M1:

While Cherry Mobile focused on giving the best hardware it can find into the phone, they seem to forget that calling is an essential feature among mobile phones. Call quality on the M1 is below average and not even par with other phones in its range. The soft and quiet earpiece doesn’t contribute to good voice calls but at least the other party can hear us well.

Pretty much everything is onboard including LTE, Bluetooth, GPS, and NFC. Reception is pretty good and, as always, LTE signal strength depends on your area.

A large 3600mAh Li-ion battery cell provides power to the device. That’s an impressive number already for a 5.5-inch handset but usage with the device tells a different story. Under our traditional battery test where we loop a 1080p clip with 50% brightness and volume through a headset, it was able to last for 7 hours and 8 minutes. While on PCMark battery test, it only scored 6 hours and 33 minutes. It’s dissapointing to see the M1 fall short of juice before a full day ends especially since it’s got a pretty big pack.

Since the Cherry Mobile M1 has a lot of firsts for the local smartphone brand scene, it also has a number of quirks that needs to be fixed and issues to be addressed. If you’re asking if it’s a re-brand of another smartphone, the answer is yes. The M1 is re-brand of the Zopo Speed 8. We wished though that they could have opted for a better-looking smartphone to carry locally since this is their top of the line model. Even some of their lower priced Flare series have a better build than the M1. 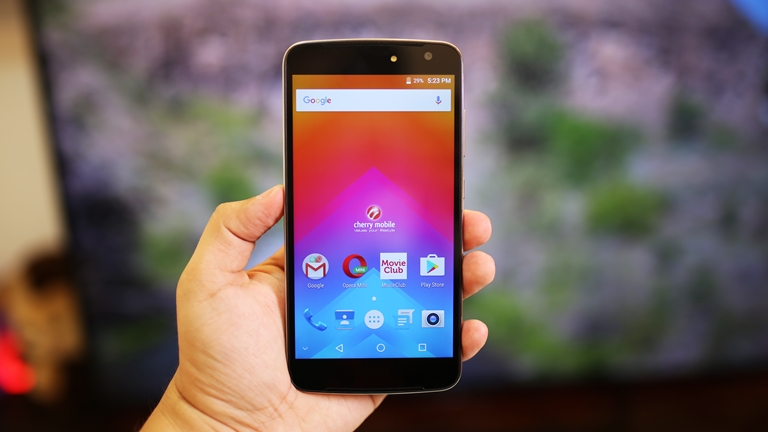 That being said, the M1 doesn’t impress us as an overall smartphone but if you’re for the specs and power, the M1 has a lot to offer. For Php11,990, it’s a notable smartphone on paper.

Bought it on a Thursday, today is Sunday and it wont power on, even if the charger is connected. I left it 100% before I slept and now it doesn’t indicate it is charging nor opening.

It is still under warranty but they wanted a tech report sa service center nila first before they can have it replaced. Hassle.

You’re better off with the Oppo F1S