Nokia hypes up this year’s Mobile World Congress (MWC) with a teaser clip of its upcoming camera phone technology called, PureView, also rumored to be called the Nokia N808. 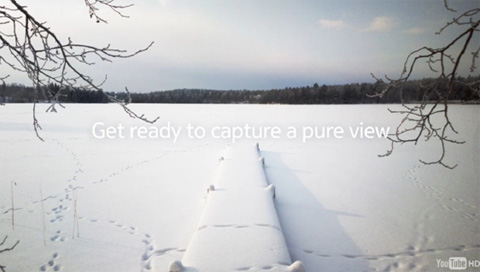 I was wondering when Nokia will release a successor to the N8 – the Symbian phone (sighs) which refuses to die all because of its ridiculously large camera sensor. With PureView, the Finnish company is just really showing off. Check out the teaser below and may I suggest that you play it full screen in 1080p.

Now donâ€™t be disappointed if you canâ€™t find a trace of the camera phone in the snow. The 22-second clip shows three images that boast the camera’s ability to produce â€œPure detailâ€, â€œPure depthâ€ and â€œPure definitionâ€. It then shows a snowy landscape revealing that the previous images are just crop outs of a bigger picture. Now that’s stunning quality!

No specifics yet on how many megapixels this camera phone is carrying under the hood but we can expect it to have at least 12 MP, capable of 1080p HD video recording with video stabilization. For the OS, it’s more likely to run with the latest Symbian Belle.

Excited? Weâ€™ll soon find out on February 27, 2012 at the Nokia MWC press conference.