A month after its data-enabled sibling got updated; the Wi-Fi only version (GT-N8010) of the S-Pen-touting tablet has finally joined the Jellybean bandwagon.

The 441MB Android 4.1.1 firmware is said to be delivered via an Over-The-Air update with users in Germany getting it first. There’s no word when the update will be rolled out to other countries, but since the update is already out in the wild, we’re assuming that it wouldn’t take that long before users are prompted to download and install the update. 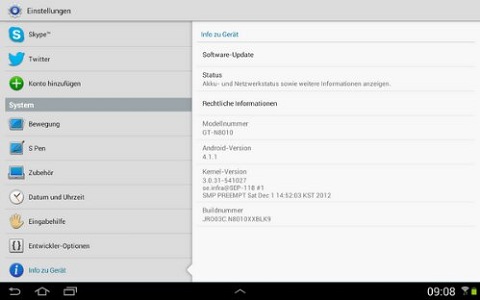 Other than the file size and which country got the update first, our source didn’t provide too much info about the things that this update brings to the 10-inch slate. But given that the GT-8010 and GT-N8000 doesn’t differ much in terms of specs, we can safely say that the former will also be treated with the Samsung Premium Suite Upgrade just like its 3G-enabled counterpart. Here’s a look at the things that this Jellybean update may bring to the WiFi only model of the Galaxy Note 10.1:

In addition to the Premium Suite Upgrade, there are of course the usual upgrades that Jellybean has to offer such as improved notification bar and performance enhancements that Project Butter brings to the table.

As mentioned earlier we’re not sure when the update will reach our shore. So we’d appreciate it if someone will be kind enough to tip us or comment on this post as soon as they receive the update.