When one battery isn’t enough to get you through an entire day, why not put two batteries on a smartphone? It’s a rather simple (and somewhat crazy) logic that Gionee is trying to pull off on their upcoming handset dubbed as Marathon M5 which is said to feature dual-battery setup with a combined capacity of 6000mAh.

Little is currently known about the Marathon M5’s internal configuration. However, if the specs sheet of its precursor – the Gionee Marathon M3 – and the current trend in the smartphone segment are anything to go by, then Marathon M5 may sport a mid-range specification that consists of a 5-inch 720p display and a mid-range quad-core processor with 2GB of RAM. 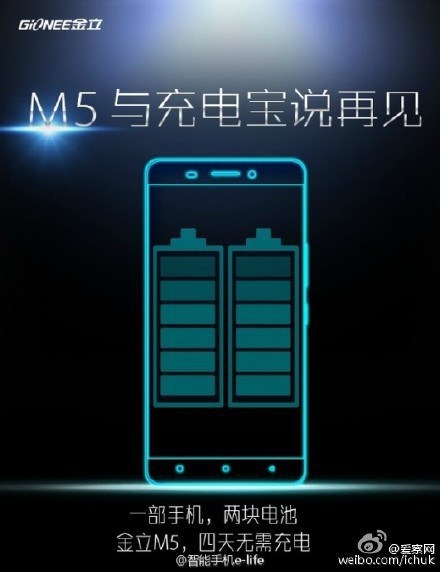 It’s also likely that the Marathon M5, like its predecessor, will not win any awards for having a thin form factor given that it will house two batteries. But we imagine that some users, especially the road warriors, will not mind the additional heft and thickness of the Marathon M5 in exchange for long battery life which, according to Gionee, will last for 4 days of continuous use.

Details about the Gionee Marathon M5’s pricing and release date are not disclosed at the time of writing.

Did someone say OPPO?
OPPO Whiteknight reporting in!

Since Gionee rebrands devices, I’d bet that this would be a rebranded Innos D6000