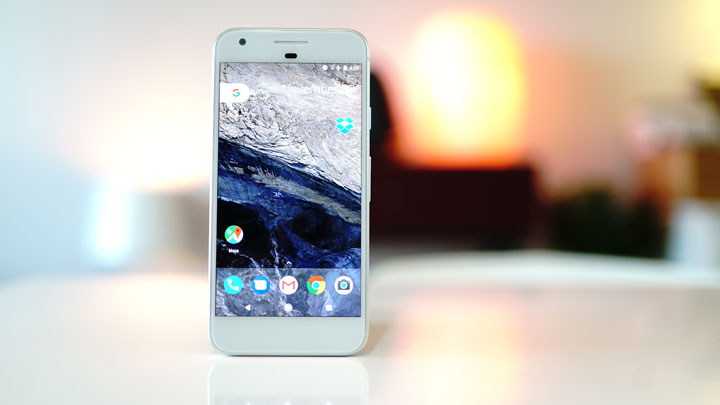 The Google Pixel is the first smartphone after the Nexus program that the company started many years ago. Google’s approach to the Pixel line is still somewhat similar but it’s also obvious that the company is aiming at the flagship category. With more control over what and how the device is manufactured, the Pixel and the Pixel XL basically represent the best of what Google can offer.

The Pixel has a simple and straightforward proposition — best hardware and the latest software from Google. Google took HTC to task in building this flagship phone. As such, you can see some resemblance of the craftsmanship and some design similarities with HTC’s own line-up, especially the HTC 10. 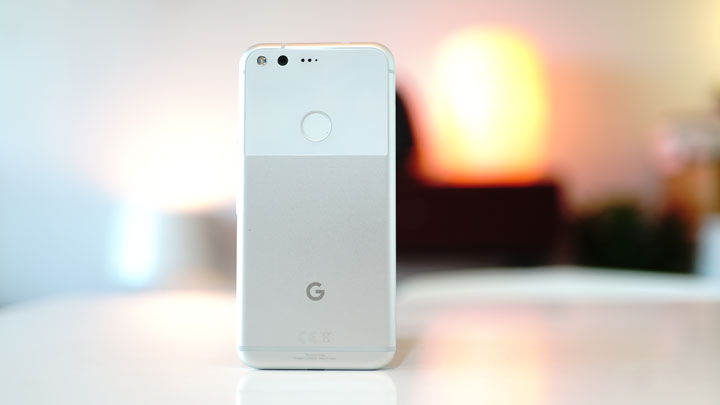 Up at the front, the Pixel has that uncanny resemblance to the iPhone 7 and the HTC 10 minus the physical home button.

On the right side is the power button and volume controls; the SIM card tray on the left, 3.5mm audio port up top and a USB Type-C charging port and speaker grills at the bottom. You can also see the antenna bands around the sides going all the way to the back. The chunky corners and chamfered edges are reminiscent of the HTC 10. That’s not really surprising since the device was manufactured in collaboration with HTC. 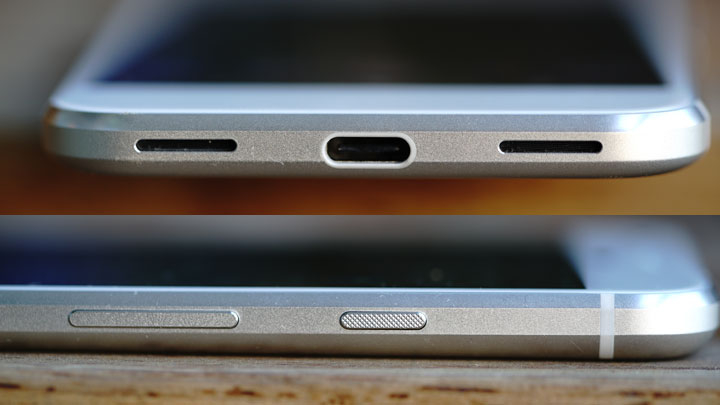 The device has thick chamfered edges, the same ones we first saw with the HTC 10. It has a certain heft to it with a smooth finish which is a bit slippery on the hands so it is best to get a bumper case or protection right after buying it.

At the back, you’ll see the matte aluminum finish with the glass panel on the upper section that covers the camera, LED flash, and a few sensors as well as the fingerprint scanner. The placement of the fingerprint scanner at the back is already common nowadays (same LG, Huawei) and works well when you’re holding the phone with one hand but not when the phone is flat on a surface or table. The scanner is fast and responsive and we rarely get errors using it on a daily basis. You can register up to 5 different fingerprints. 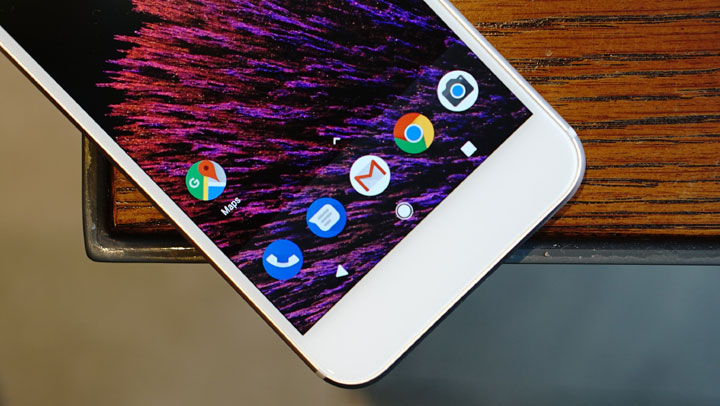 The Pixel also has a thick chin which we find a bit of an eyesore. This is the space where the physical home button or the capacitive menu are usually placed but in this instance, it’s just a large empty space.

The Pixel comes with a 5-inch AMOLED display with a full HD (1920×1080 pixel) resolution. While that’s not close to the quad HD screen resolution of many other smartphones, the 441ppi pixel density is more than enough. Besides, Google is aiming at the 4.7-inch iPhone 7 (1334×750 pixels, 326ppi) so it makes sense to set it at this level. 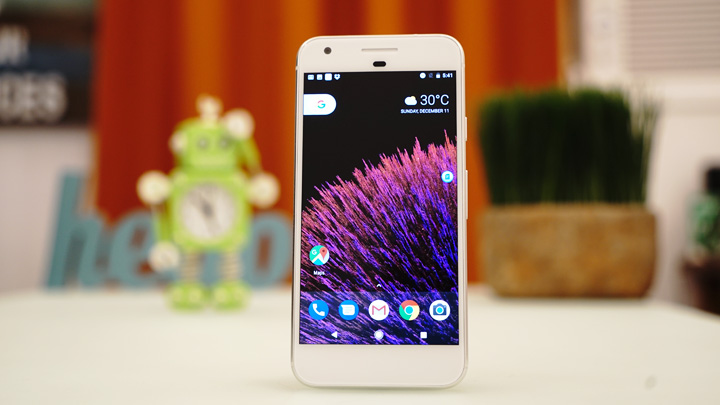 Nevertheless, the screen looks really nice, crisp and bright. Outdoor visibility is good, even in direct sunlight but you’ll have to crank the brightness to max for it to be really comfortable. The AMOLED screen looks really good with deep, dark contrast and rich colors.

The entire front side is completely covered by Gorilla Glass 4 with a cut on the area of the speakerphone. For the white variant, the thicker-than-normal bezels are quite prominent. 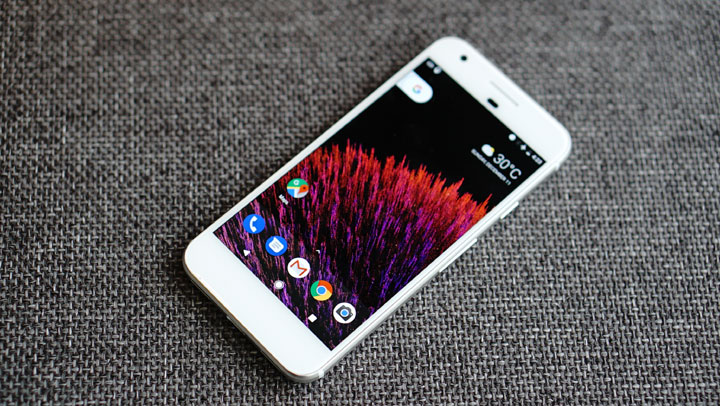 Since the Pixel support Daydream VR, it would be interesting to see how it fares considering that the resolution is not really optimal for VR.

The 5-inch display size may not really appeal to everyone but in case you want bigger, there’s always the Pixel XL.

The Pixel’s main camera is a 12.3-megapixel sensor with f2.0 and phase-detection autofocus. It’s fast and accurate and produces really great photos. 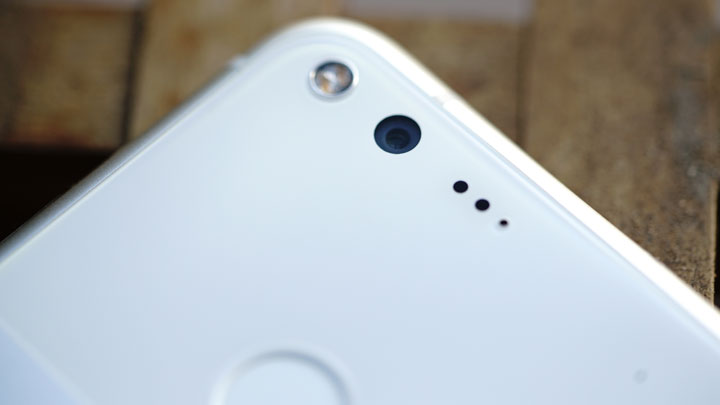 Works best on daylight but not so much on low-light environments. 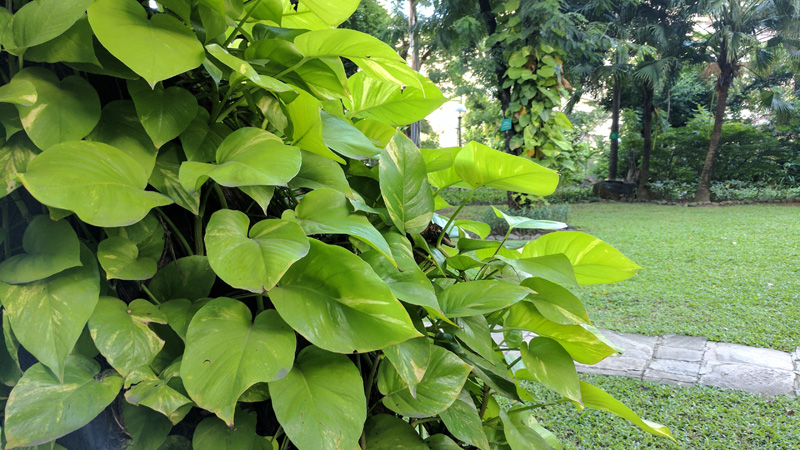 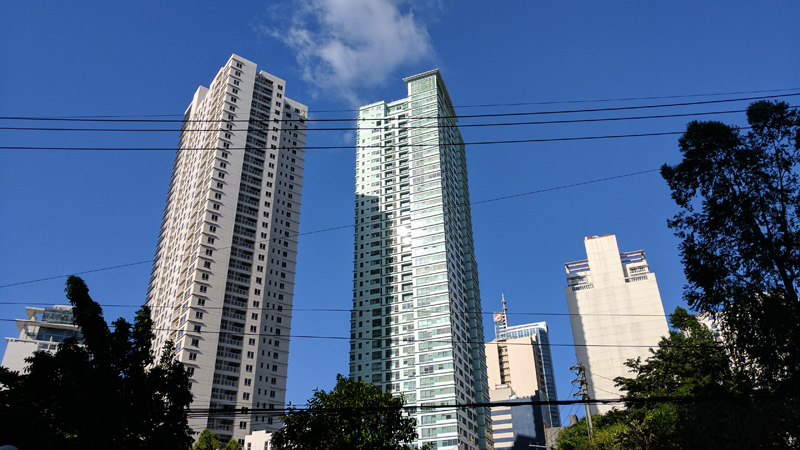 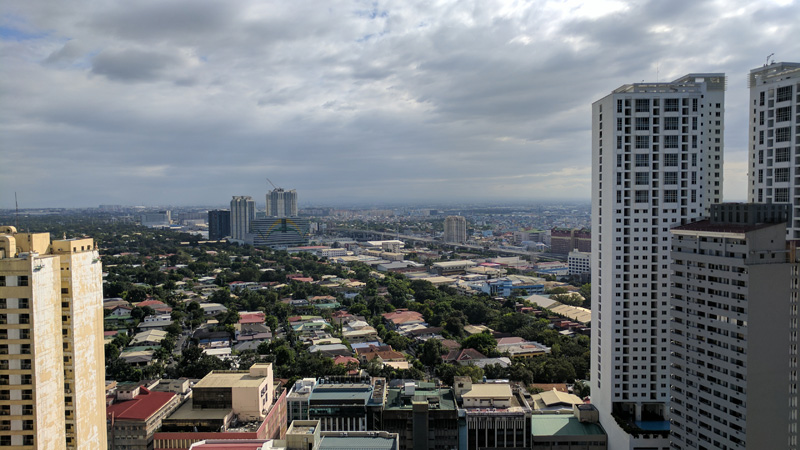 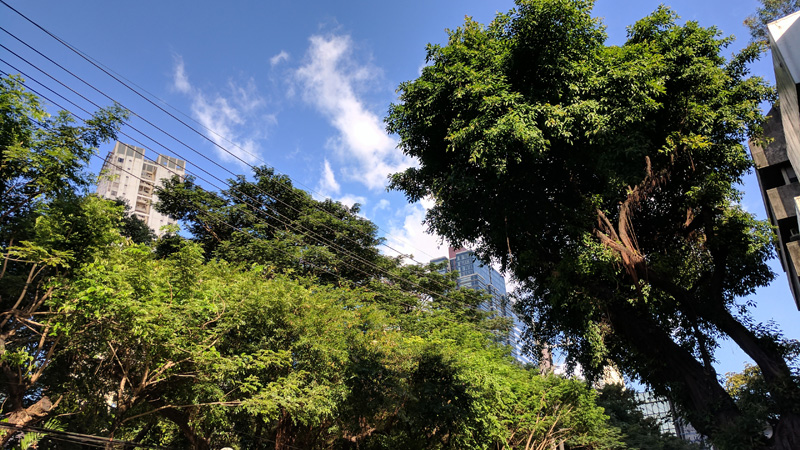 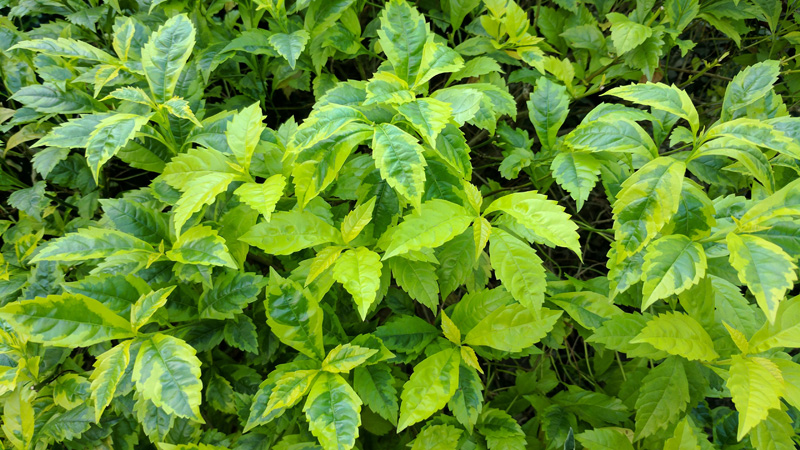 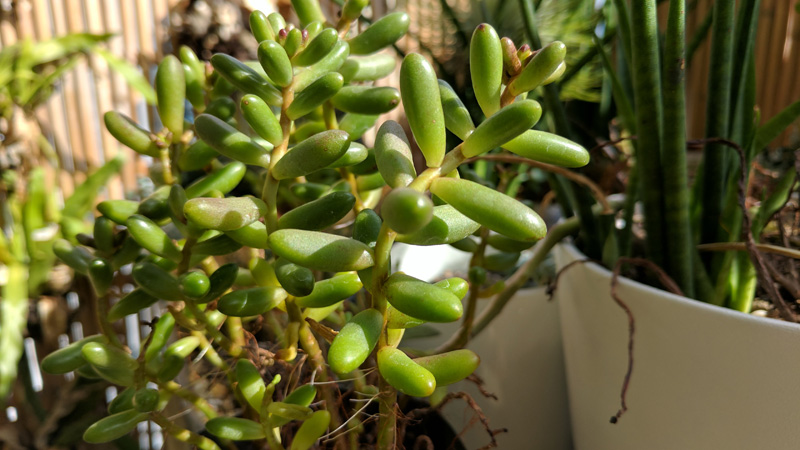 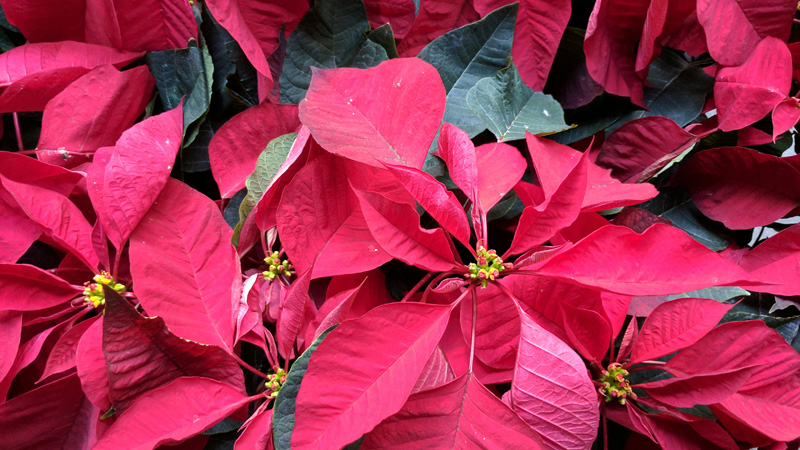 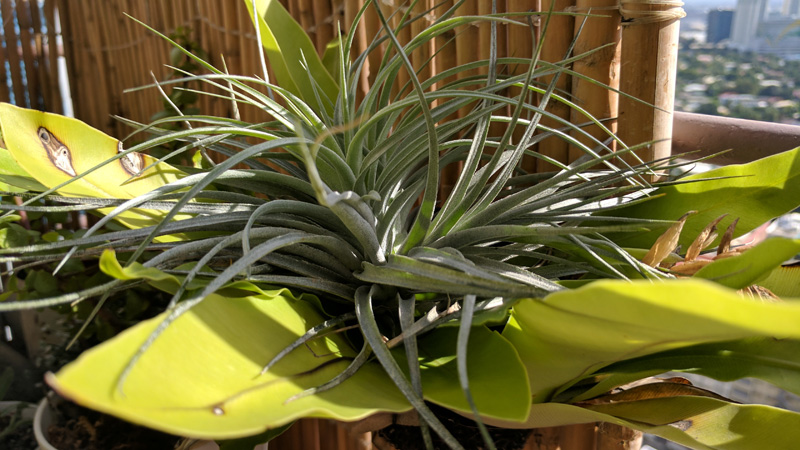 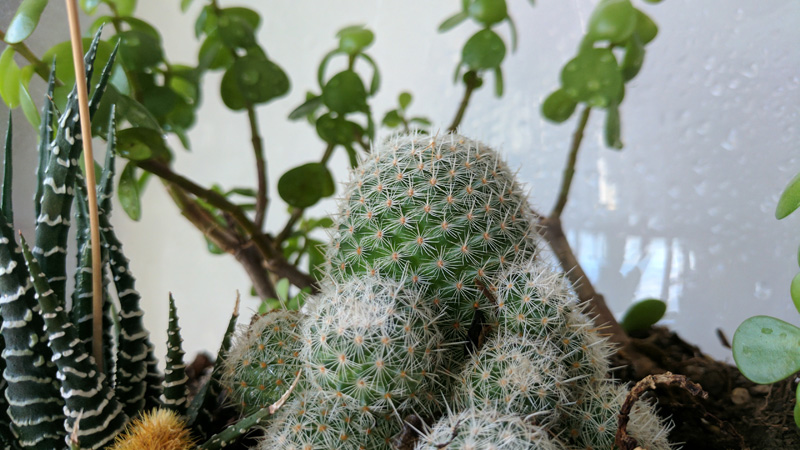 Video recording can go up to 4K and has electronic image stabilization to minimize shakiness and produce smoother shots like the one in the sample video below.

The camera does not have any manual controls but there are a few default features like slow-motion capture and lens blur. The front camera has an 8-megapixel sensor and f2.0 aperture that can shoot wide-angle shots and record 1080p videos.

The speakers at the bottom end of the device produce really good, loud sound.

Under the hood, the Google Pixel comes with Android 7.1 Nougat. The home screen has been re-designed with a new UI and app drawer. It’s looking more intuitive, snappy and responsive. It looks more optimized and cleaner than before. The Google Assistant is also very fun to use. 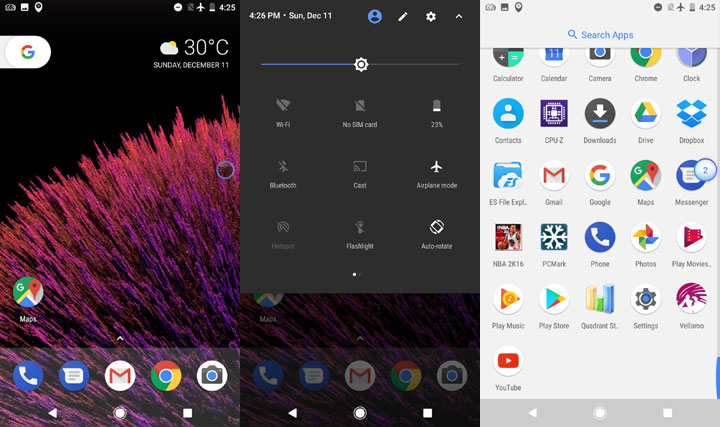 Google Assistant is a brand new feature only found in the Google Pixel although it’s actually an extension of Google Now which we’ve seen in previous releases of Android. Google Assistant has a few more tricks up its sleeve and with the ability to make a two-way conversation with the user (using Google’s natural language processing algorithm).

Android Nougat 7.1 has been significantly re-designed in terms of the user-interface. The streamlined UI makes it look cleaner and more polished with the app drawer subtly hidden by a small arrow indicator and pops out when you swipe up. 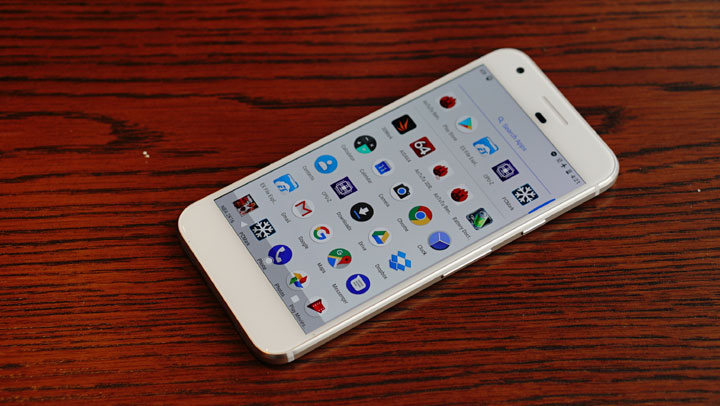 Since this is a pure installation of Android Nougat, there is no additional apps or bloatware pre-installed. The 32GB variant has about 29.7GB of usable storage. The only problem is that there’s no expandable storage via microSD card so you’ll have to contend with the built-in storage or get the higher variant.

The Pixel uses the latest Qualcomm Snapdragon 821 chip and paired it with 4GB of RAM. While this configuration is pretty common in a lot of flagship phones, the device also comes with Android 7.1 Nougat right out of the box. The optimizations and added features that came with Nougat gave the Pixel an edge among other phones out in the market today. 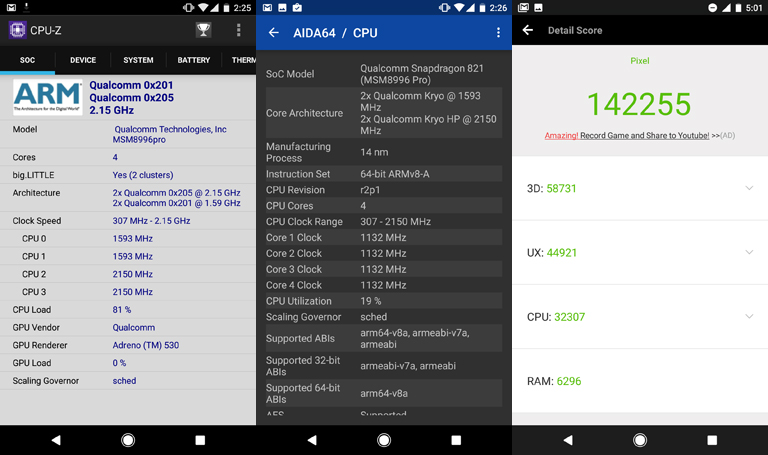 The Snapdragon 821 and 4GB RAM combo performed very well. Our initial Antutu benchmark gave it a score of 142,225 which is within the range of other SD820 devices we’ve tested before.

Call quality on the Google Pixel is good — voice calls are clear and crisp, signal reception is strong and text messages are sent/received quite fast. For connectivity options, the device comes with the standard set — fast 4G/LTE, dual-band WiFi, Bluetooth, NFC, and GPS. There’s only one SIM card slot for a nano SIM card. The embedded Snapdragon X12 modem supports LTE Cat. 11 that can go up to 600Mbps down and 75Mbps up if the network supports it. 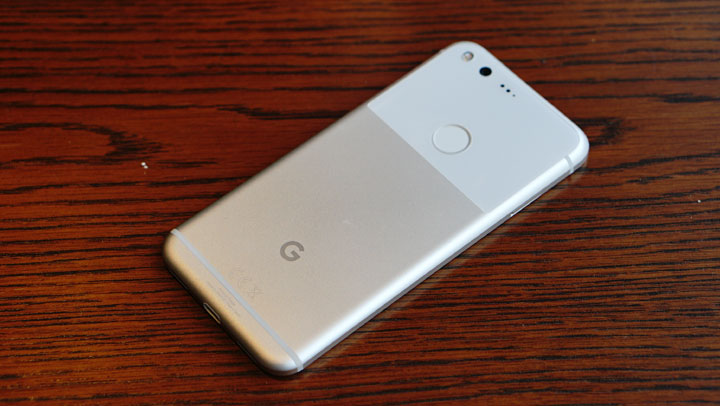 As for battery life, the 2,770mAh non-removable battery might not sound a lot but it can handle the phone just fine for about a whole day of moderate use. Nothing spectacular here but we’re hoping Google would have squeezed in a bit more. 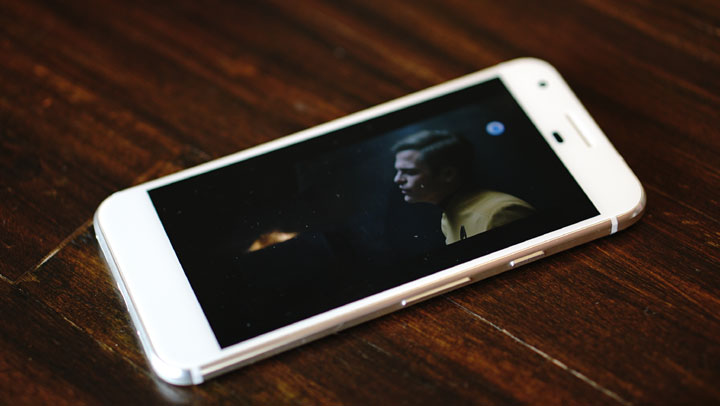 The Pixel did not complete our standard battery benchmark test (PCMark Battery Test) but in our standard video loop test, it only registered 9 hours and 30 minutes running a movie at 50% brightness and 0% volume, in airplane mode. The result is consistent with our observation that the Pixel has average battery performance at best.

The Google Pixel also support fast charging and can go from zero to full charge in a little over an hour.

Simple yet elegant; raw yet powerful. This is what the Google Pixel represents. If the iPhone is a great product that came out from the harmonious union between the hardware and software, Google has made the same achievement with the Pixel. Nice, simple design, the powerful hardware under the hood, great camera, and over-all experience. The Google Pixel is setting the bar higher for all other Android phones out there.

There were a few things we wish Google had addressed on this phone. One is the massive chin up front. That extra space could have been optimized for something useful. The second is the meager battery (2,770mAh) and 3rd is the absence of the microSD card slot but that’s already expected of Google. And of course, there’s the expensive price tag previously unheard of in many Google-inspired smartphones.

The Google Pixel is not officially released in the Philippines but you can get one from Widget City for Php40,500 (see listing here).