Luxury smartphone makers have been announcing a lot as of the late. We’ve seen Lamborghinis and Vertus and even Blackberries, and Swiss handset maker Gresso wants to catch up as it announced a new premium device to add to its portfolio: the Regal Black. This new titanium and optional 18-carat gold-laden smartphone, which the design may remind you of an iPhone 5/5s, sports a 5-inch 1080p display, a 1.5GHz quad-core processor, 2GB of RAM, and a 13-megapixel camera. These phones are handcrafted, and takes eight hours just for the grade 5 solid titanium unibody case, a material also used in aerospace and high-end sports cars, to be milled. Sadly though, there’s no info on what specific processor, Android version, nor battery capacity the phone has. 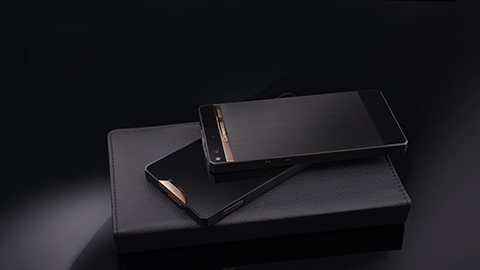 Black and gold looks way more luxurious than the white and gold of the iphone 6.

for that price- lte should be a standard

You want a phone that looks like an iPhone, get an iPhone. For a lot less than this. But yeah, it’s gorgeous!

You want luxury, get an iPhone.