HONOR has separated from its former parent company Huawei. At first glance, we felt reminiscent of the Huawei P50 on the HONOR 70 that we have today. Did HONOR make the right move to get out of the Huawei ecosystem? Let’s find out.

To start,  the HONOR 70 is definitely aesthetically premium in a market where everything feels the same. The smartphone comes in two colors – Crystal Silver and Midnight Black. Despite the elegance, the phone is made of plastic and this isn’t necessarily a bad thing. Should it drop, there are fewer reasons to see the HONOR 70 shatter right before your eyes. The downside of this though is that scratches are inevitable and well, wireless charging won’t be an option. 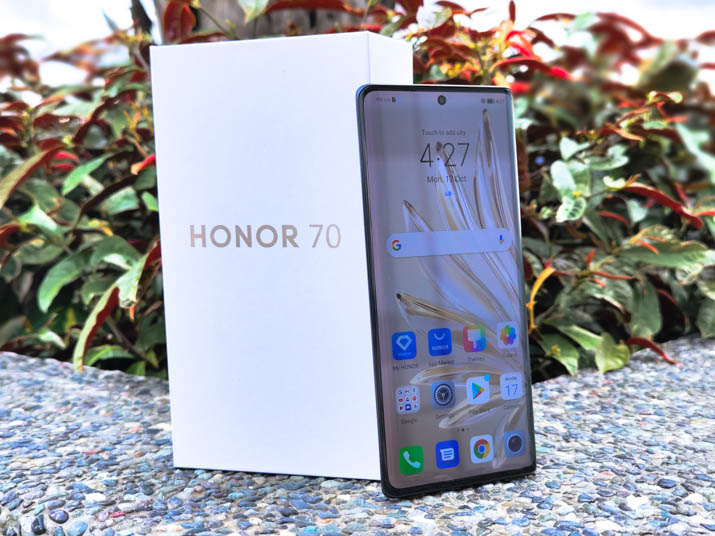 At the rear, we have the large circular camera islands that stick out on the upper left part of the phone that houses the triple cameras and flash. Personally, there are too many writings at the rear with the camera specs along with the brand logo. Of course it’d look classier with just the branding at the rear. 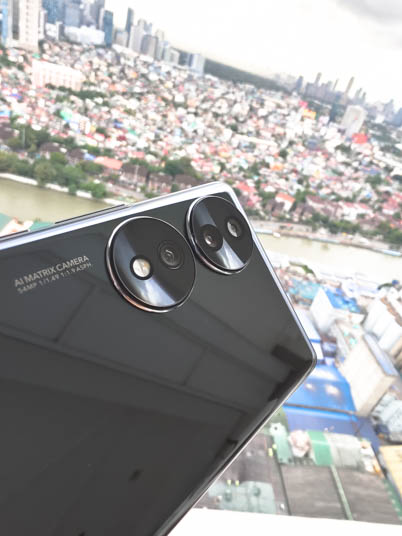 Despite that, HONOR was able to retain the curved displays for this mid-ranged HONOR 70 making it feel like a high-end phone. Though it isn’t everyone’s cup of tea, it does make the phone seem slimmer and lean in the hand. 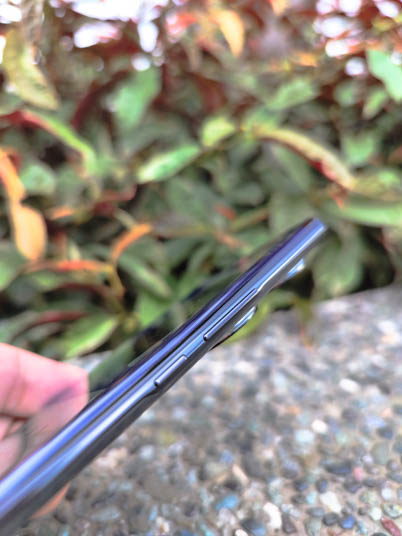 The volume rockers present on the right-hand side of the phone are joined by the power button, while the SIM tray and sole mono speaker rest at the bottom with the USB-C port. 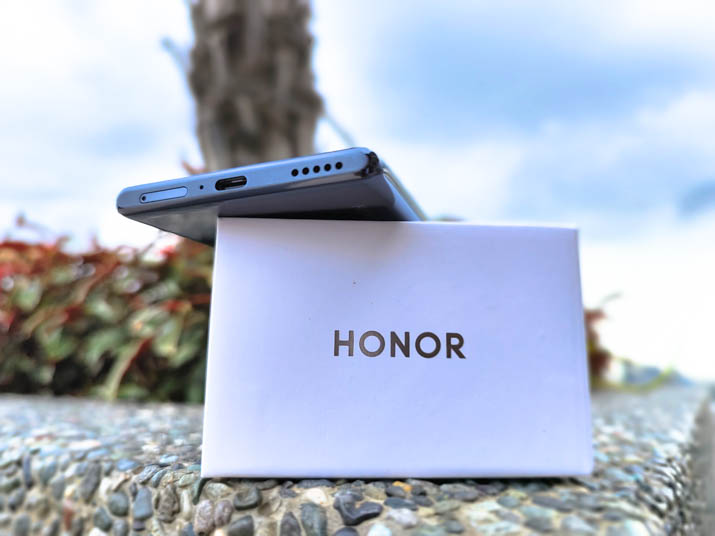 Moving over to the display, the phone is fitted with a 6.67-inch 1080 x 2400 OLED display with a tall 20:9 aspect ratio. Despite the slippery feel of the phone, it does fit well despite having tiny hands. To add, the 120Hz refresh rate on the HONOR 70 makes the scrolling a lot smoother than expected. If you aren’t privy to such details, it is hardly noticeable that the HONOR 70 actually does not use an expensive material for the panel Noticeable on both ends of the phone is a hint of darkening as the sides slope away when viewing with the brightness at its peak. It isn’t much of a letdown but can tend to be distracting at times. The HONOR 70 and its curved edge were meant as it made the Android gesture swiping from either side a lot easier. 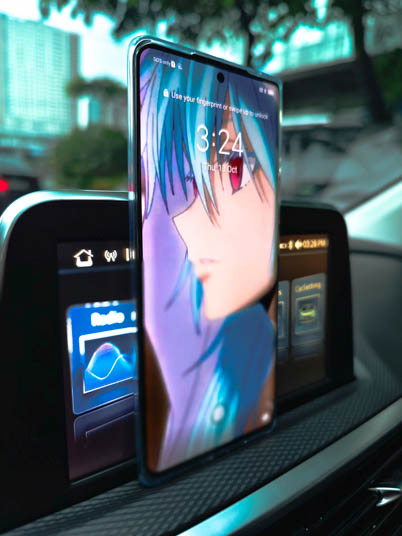 Brightness is decent as there were close to no issues when in use under direct sunlight. This is a notable fact since most phones in this price range tend to be unviewable when at noon’s peak.

Moreover, the HONOR 70 is the first smartphone to use the Sony IMX800 sensor for its main 54MP camera lens. This in turn generates amazing photos. With the right touch of color reproduction, a great dynamic range, and good detail, there is a fair color consistency between the main cameras which is lacking in most mid-range phones nowadays.

On the side of the ultra-wide, these are also great for macro shots. Despite the cameras having less strength under lowlight conditions, the night mode on the cameras really helps out a lot. There are no telephoto lenses equipped but it isn’t all too bad. The phone is equipped with a digital zoom though it gets too pixelated right away after 2x zoom.

As for the front camera, the 32MP selfie camera gives an awesome contrast for selfies and videos but struggles quite a bit in direct sunlight.

As for the UI,  the HONOR 70 runs on the Magic UI 6.1 on Android 12. It has the same software and feels like a Huawei phone from two years ago so it is basically a renamed EMUI but with Google Playstore. After a few days with the phone, it was easy to get used to the snappy feel of it but if you’re into the minuscule details, it does feel like an Android 10 in the flesh as there wasn’t much change on the Magic UI 6.1 or any adoption of the Android 12’s modern design aesthetic.

Powering the HONOR 70 is a Qualcomm Snapdragon 778G Plus 5G chipset with an Adreno 642L for its GPU. It also comes with 8GB of RAM and 256GB of storage. With the help of HONOR OS Turbo X, there is an intelligent built-in RAM Turbo engine that automatically stops background processes from getting killed when users switch between apps enabling a smoother operating experience.

Games like Genshin Impact and Tower of Fantasy were able to default to their highest settings despite being graphic-heavy but didn’t necessarily give us the best FPS. With a little tweak here and there, the gameplay became smoother.

Lastly, we have connectivity and battery life. The HONOR 70 has a dual-SIM card slot with 5G, WiFi AX Support, Bluetooth 5.2, NFC, AGPS, and even aptX, and aptX HD support. As for security, there are several options that include both in-display fingerprint scans and face recognition support. The fingerprint scanner is fast and rarely misses while the face unlocks, it is amazingly quick. 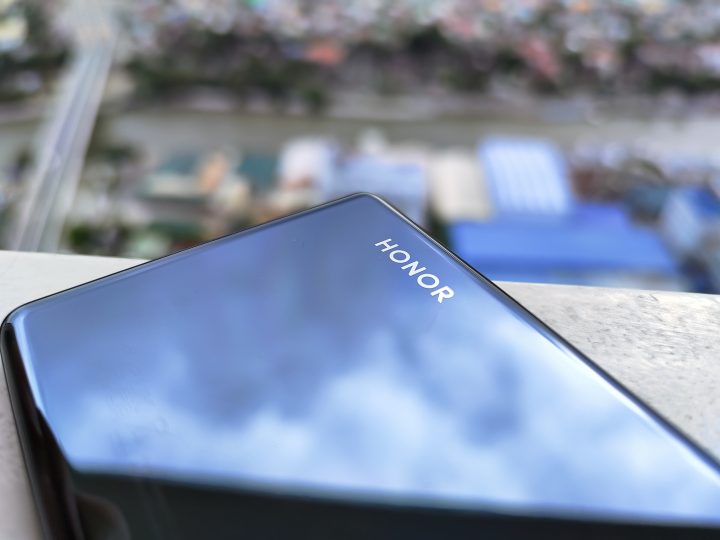 As for the battery, it is equipped with a 4800 mAh battery with a wired charging block capable of 66W charging the device from empty to 40% in 1nearly 15 minutes, and 80% in just 30 minutes. It did last about nine hours for us until it was completely drained. Of course, the battery life will depend on usage.

To wrap it all up, the HONOR 70 accomplishes a victory for checking all the right boxes in a mid-range phone with its aesthetic for high-end phones. It is definitely a step forward for the company after breaking away from Huawei. A good move too as it got to keep its Google Services. Overall, the HONOR 70 is a nice piece of work with great performance and battery life that lasts throughout the day. With its top-notch camera that delivers accuracy and consistent color reproduction, it is a must-buy in our books and is definitely a solid choice.