The first time we saw the One X was back in March of this year. It was the first quad-core smartphone that arrived in the Philippines. HTC released the One X+ to address a few of the shortcomings of the One X. Check out our full review of the HTC One X+ after the break.

Before we proceed, we recommend that you go and read over our original review of the HTC One X to give you much better perspective. 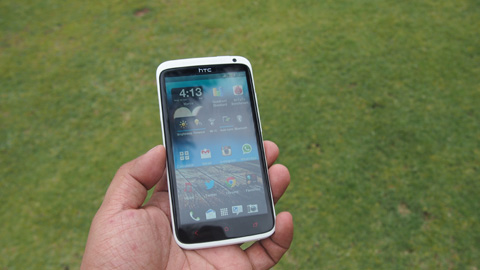 HTC address some of the original issues that came along with the first generation One X to make the One X+ a much better and more compelling handset. This includes CPU performance (especially in benchmarks), storage capacity and battery life.

Since the first One X, this line-up remains to be one of the most well-built and sexiest smartphone in the market this year. The unibody design allows for better build quality, more solid fitting and a really sleek design. 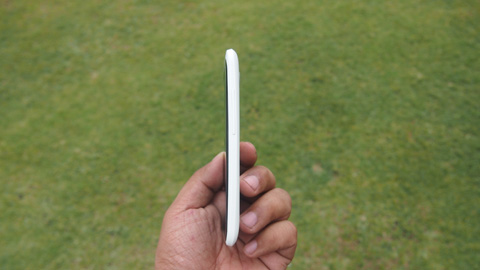 The white One X+ will clearly show the attention to detail and the fluid design. It’s got all the curves at the right places that even the glass panel at the front is smooth, the contours that outline the slightly curved shape of the body fits perfectly in the palm of your hands and the combination of black against the white background makes it look very elegant and inspiring. 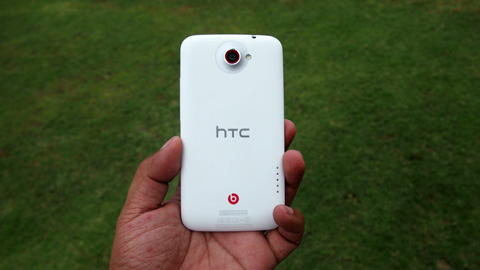 Of course, the unibody design has its shortcomings as well — like the non-removable battery and the absence of a micro-SD card slot. It’s a trade-off that HTC gambled with when they implemented this design.

We said it before and we’ll say it again, the Super LCD 2 display on the HTC One X+ is one of the best, if not the best, display screens in any handset this year. 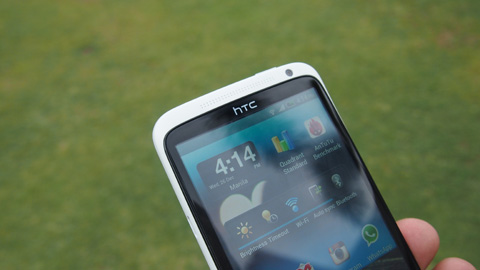 The screen is very bright once you crank it up to the highest settings, the colors are vivid, well-saturated and even. Since the One X+ uses the latest Super LCD 2 display, the viewing angles are almost perfect and clear at 180-degrees. Outdoor visibility is also good and the screen can still be readable in the outdoors or under direct sunlight. It’s not that comfortable but glare is almost at the minimum.

The HTC One X+ will run with Android Jellybean right out of the box. Not only does it run on the fastest Tegra 3 processor in the market, it will also benefit from the buttery smooth interface of Jellybean. 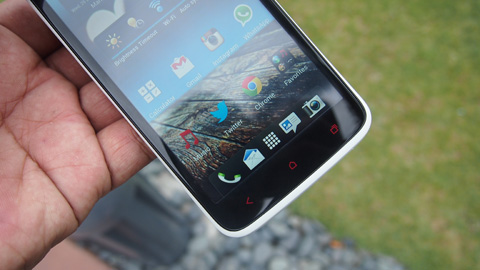 The HTC Sense UI is still among the nicest-looking and most comprehensive custom UI from any brand that has developed their devices with Android. All that eye-candy, animation and transitions add to the premium packaging of the One X+.

Since the handset runs on the popular Android ecosystem, you are ble to access hundreds of thousands of free and paid apps and games from the Google Play Store.

The large 4.7-inch screen is great for viewing music videos and short TV series. We’ve also played a number of graphics heavy games from TegraZone and the screen did justice to that stunning graphics that’s optimized for NVidia chips. 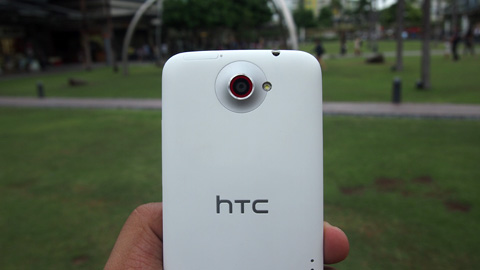 The One X+ also separates itself from the old One X but adding red accents all around the unit — the soft buttons, the ring around the camera and the large Beats logo at the back.

Here are some of the sample photos taken with the 8MP camera of the One X+:

Notice the well-saturated colors of the flowers, the crisp images and well-exposed subjects. The camera takes really good photos and it takes them really, really fast that we didn’t notice any lags or delays in the shutter.

Here are some sample video clips taken with the camera, both on daylight and artificial light:

Looking at the clips, the One X+ performed well even on low-light conditions. There’s some delay in adjusting to exposure and the continuous focus but everything else looks really good.

HTC also incorporated Beats Audio into the handset which added to that great audio experience.

With the latest NVidia Tegra 3 processor, the HTC One X+ scored the highest in both Quadrant and Antutu Benchmarks that we’ve seen. With a score of 7,195 for Quadrant, this is the only handset we’ve reviewed that passed the 7k barrier (56% better than the old One X). Antutu Benchmark gave it a total score of 16,173, the highest we’ve seen so far (42% better than the One X). 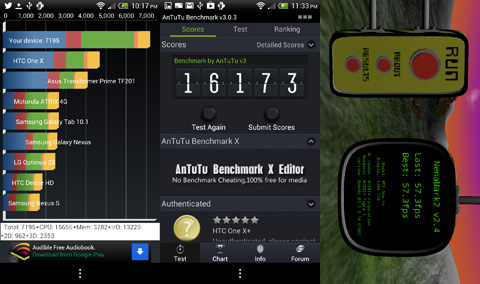 Even the NenaMark 2 score is much better at 57.3fps, almost the same as any other flagship handset and an increase from the 47.7fps on the old One X. Overall, these are among the highest benchmarks scores we’ve seen in a handset and by far, the highest cumulative score for all three tests. 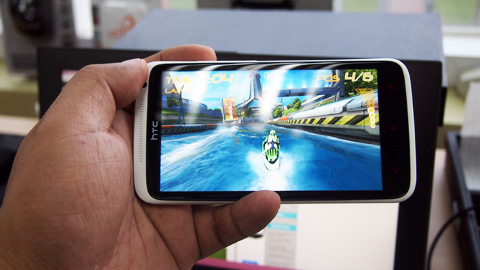 The One X+ performs really well, both with the usual apps and most especially with graphics intensive games (like Riptide GP and other TegraZone apps).

Call quality is really good with the One X+. The audio is crisp and clear, no noticeable interference and signal strength is pretty decent. We didn’t experience any delays in receiving and sending SMS and have not encountered any erratic signal issues. Whatever minor issues we encountered can be probably attributed to the network and location rather than the handset itself.

HTC has now increased the battery capacity of the One X+ to 2100mAh, giving it more battery life on a single full charge. While the battery life would last you the whole day of moderate use (and a little more), we think it’s still up to the individual user and their usage pattern that will determine how long a full charge will last.

With 3G on all the time, a bit of Twitter, Facebook, WhatsApp and Instagram, we are able to last around 18 to 20 hours. With 3G off and WiFi off, we managed to squeeze the battery to 2 days and 7 hours will a little bit of calls and mostly text messages.

We can definitely say that the HTC had redeemed itself with the One X+. Much faster chip, better battery life, large storage capacity — all on the same great design. The huge 64GB storage alone amounts to about Php10,000 in value (if we based it on iPhone 5 price between 16GB and 64GB).

The One X+ is still short of perfect. Everyone you ask will say they need more battery life, option for removable battery, extended storage support and more. The HTC One X+ now retails for about Php27,900 in local stores (SRP was Php32,990).

What we liked about it:
* Great performance, fast CPU and GPU
* Large storage capacity
* Impressive full HD camera
* Nice and huge HD display screen with Gorilla Glass 2
* Beautiful design and material
* Jellybean out of the box

What we didn’t like:
* Still on the pricey side
* No microSD card slot
* Non-removable battery
* A little late in the game

Disclosure: The HTC One X+ was given to us by HTC Philippines as an honorarium for allowing them to use our review of the old One X in a print ad back in May.

Article Under:htc one x htc one x plus review

somebody pls tell me where can i buy htc one x+ LCD or where can i go to repair it. i broke mine :(

currently its worth Php28,600 in HTC SM North Edsa.

Where is this available now?

Bought this one and all the reviews are true. Superb display, audio and processing power. As for the camera, I can say that the pics of an iphone 5 are better in color but this one takes really good photos too. I think there are a lot of forums discussing on how to set the best camera settings to achieve that realistic effect and make the colors more vibrant. But aside from that, this device rocks!

however, the review for HOX was running ICS

Too bad no carrier will offer this device with a plan. :(

what about one x running jb?is it still way under one x+?

“What we liked about it:” doble…hehehe!

What we liked about it:
* Great performance, fast CPU and GPU
* Large storage capacity
* Impressive full HD camera
* Nice and huge HD display screen with Gorilla Glass 2
* Beautiful design and material
* Jellybean out of the box

What we liked about it:
* Still on the pricey side
* No microSD card slot
* A little late in the game

Check the verdict. Both are pros. No cons:)