Just this month, HTC released its U series of smartphones after being out of the tech scene for a while, and one of them is their newest flagship device, the U11. It features the talked-about Edge Sense, which enables you to launch an app just by simply squeezing the sides of the smartphone. But is this all there is to the U11? Let’s delve into our review. 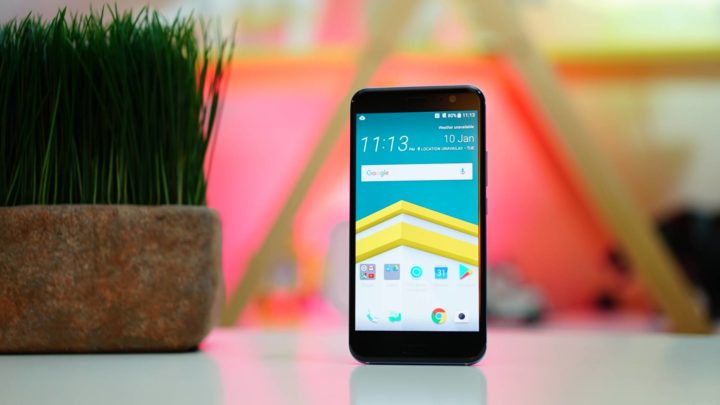 Right off the bat, the HTC U11 looks spectacular, thanks to its liquid surface and 3D Corning Gorilla Glass 5. It sports a 5.5-inch Super LCD5 display, with minimal bezels on its side, and is a tad bit smaller compared to the U Ultra. 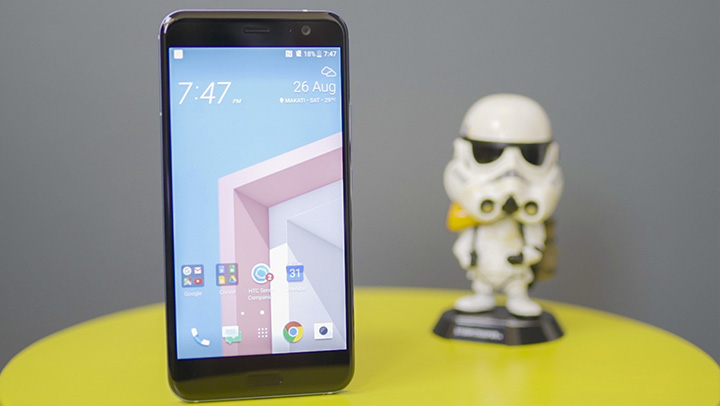 Below it, we have two capacitive buttons (back and overview), and the fingerprint scanner on the middle.

Up top, you’d see its whopping 16MP f/2.0 front-facing camera which is 4MP more than the rear camera. 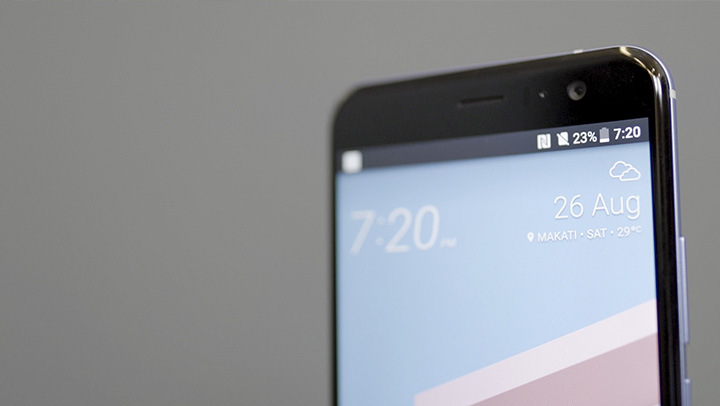 On the right side, we have the power/lock button, volume rocker, and two antenna bands on both ends of the device. The left side is devoid of any buttons, though. 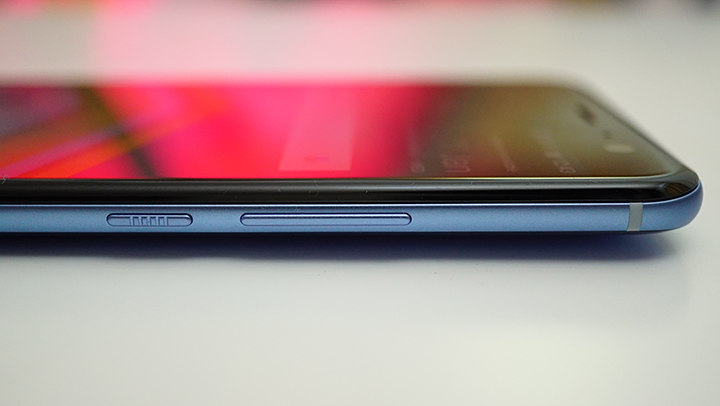 Above the phone, you’d spot another antenna band, microphone, and hybrid SIM tray. We were quite floored when we saw the hybrid SIM tray’s location because usually, it sits on the side of the phone. 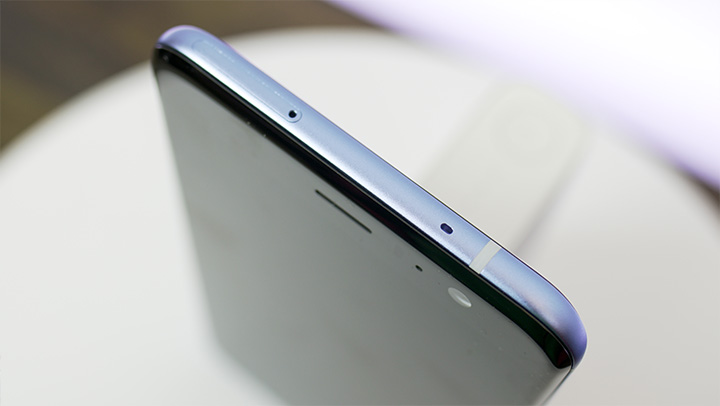 Underneath the phone, we have a USB Type-C port which supports DisplayPort, two antenna bands on both ends, speaker grille, and microphones. As you may have noticed, the phone lacks a 3.5mm headset jack. This is because HTC decided to implement the use of their USonic earphones, which hooks up via the Type-C jack, but they have been kind to provide an adapter for so you can still use your own earphones with a standard jack. 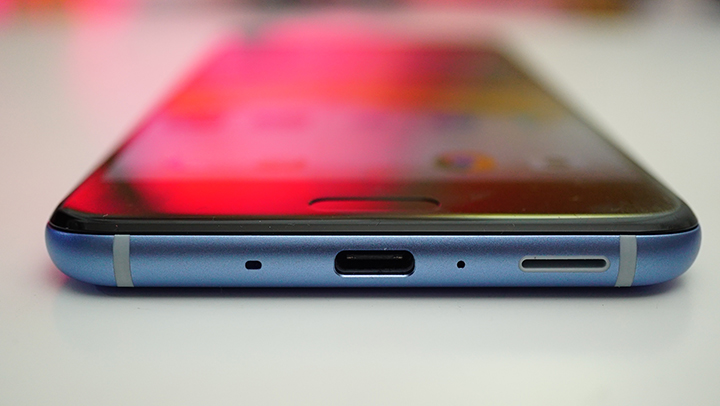 Flip it on its back and you’d be surprised to see your own reflection. No kidding. It’s a beautiful, glossy, Liquid Surface with curved edges that made the phone a sight to behold. 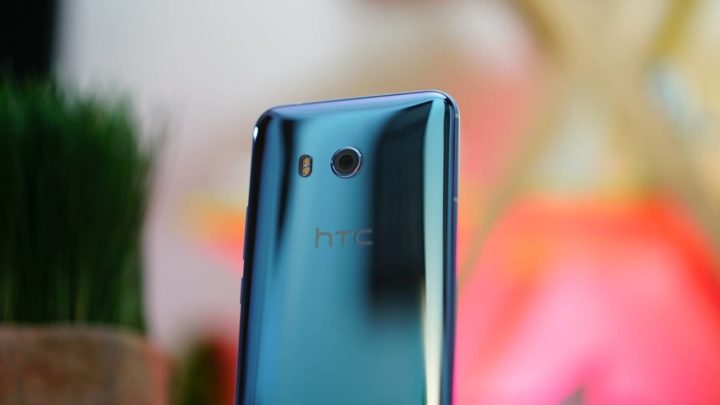 Holding the phone feels comfortable and solid, however, it is terribly susceptible to fingerprints and smudges. The phone also has an IP67 rating meaning it’s dust, splash and water resistant up to 1 meter of freshwater for up to 30 minutes. Just above the HTC logo is the 12MP f/1.7 rear camera accompanied by a LED flash.

The U11 sports a 5.5-inch Quad HD Super LCD5 with a resolution of 2560 x 1440 pixels (QuadHD), which equates to 534ppi. Color reproduction looks rich, accurate, and well-saturated. Viewing angles are also good. Under the settings menu, you can control your screen’s temperature based on how cold or warm you want your screen to look like. Audio-wise, the U11 is embedded with Hi-Res DAC and HTC BoomSound, which gives you an option to switch from Music or Theater Mode. Audio quality sounds good and comes in with a good bass punch, which you can rarely find in smartphones these days. We actually prefer the Theater mode when listening to music as it is more ambient, while the Music mode sounds a bit tinny and muffled. HTC’s USonic earphones with noise-cancelling feature also stayed true to its claim. It offers deep bass tone and gives off real voice clarity.

The U11’s camera is one of its winning features. It comes with 16MP f/2.0 front camera and 12MP f/1.7 rear camera with HTC UltraPixel technology, UltraSpeed Autofocus, with w/ dual-tone LED flash, and OIS (Optical Image Stabilization). Fortunately, there’s a Pro (manual) feature in it so it gives you more control on how you want your photos to look like, and you have the option whether to save your photos in JPEG or in RAW format before shooting. Other stuff like HDR, and Panorama are included as well. Resulting photos on the rear camera looks impressive. It’s sharp, detailed, and vibrant, especially when you’re shooting outdoors. Its dynamic range is also commendable, and using the RAW format is just as good as it can be. HTC wasn’t kidding when they claimed their camera to have an UltraSpeed Autofocus. It was that fast which can be overwhelming if you’re used to the AF performance of other phones below its class. Shooting photos in low light gave us a decent quality, since it has a wide aperture (f/1.7), though at times it can get fairly grainy. Nonetheless, still a great job from HTC.

For its selfie department, it has built-in features including Makeup (ala Beautify), HDR and Panorama. We noticed that when taking selfies indoors, with only minimal light available, photos tend to look reddish. Outdoor selfies, on the other hand, are a different story. Resulting outdoor selfie photos looked pretty nice and crisp.

Video recording mode, the U11 can shoot up to 4K and can vary from 30fps and 60fps (new update). It also has slow-motion and hyper-lapse feature. And mind you, the U11 offers impressive and vivid video quality, both in daylight and low light. The OIS (Optical Image Stabilization) performed great while recording. Apart from that it also has a 3D Audio/Acoustic Zoom wherein you can zoom in on the video to target your subject and amplify their specific sounds.

The U11 runs on Android 7.1.1 Nougat with HTC Sense. There’s nothing really special or new with the U11’s UI since it looks like your typical Android UI that comes with an app drawer. However, the good thing about it is that HTC didn’t include any bevy of bloatware so you only get essential apps like Notes, Weather, Flashlight, Recorder, and News Republic. 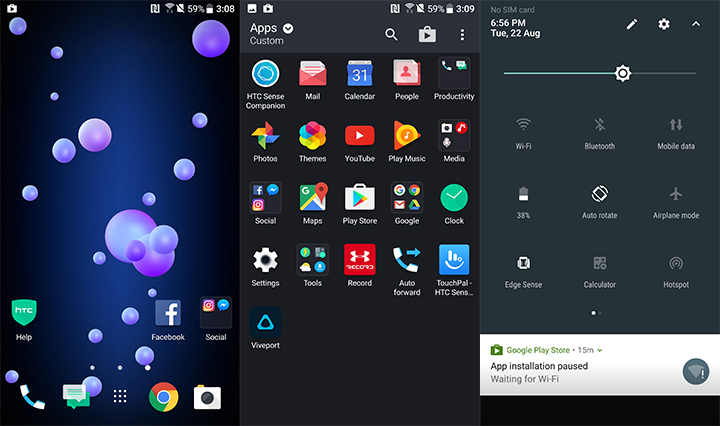 As expected on nearly all Android devices, it comes with pre-installed Google apps. The U11 lacks its own Gallery and Calendar so it uses Google’s Photos and Calendar instead. Mind you that it also lacks its own File Manager but you can always download one at Play Store. Other several pre-installed apps like Under Armour Record, TouchPal, and Boost+ are also on this device. Apart from that, it’s got BlinkFeed that works like a news feed when you swipe to the left on your home screen and HTC Companion which pops up to give reminders or suggestions. We also liked how HTC gives it users a full control on how they want their U11 to look like. It’s got its own Theme app. It even has a split-screen feature which is pretty awesome. 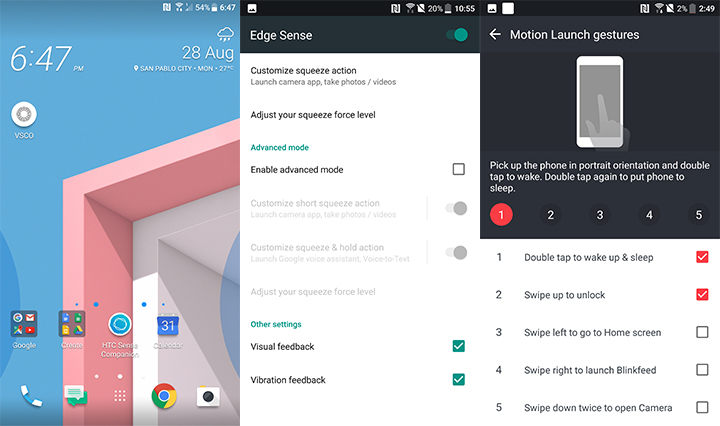 If Samsung comes with its own Bixby button, HTC has its own Edge Sense or commonly known as the “Squeeze” feature wherein you have to squeeze both sides of the U11 to launch a certain app. By default, it launches the Camera app but you have the option to replace it with whatever app you want. Plus, you have the option to adjust the squeeze force level. It also launches Google Assistant, like Apple’s Siri, on a whim. Unfortunately, Amazon Alexa (which also acts like Google Assistant) is still not yet available in the country but HTC stated that they’re going to roll it out globally.

The unit we have comes with a whopping 128GB of internal storage, with 15.79GB consumed by the system, and an ample 112GB left to use. If this isn’t enough, you can always opt for a 256GB microSD card.

Powering the U11 is Qualcomm’s latest Snapdragon 835 chipset, Adreno 540 GPU, and 6GB RAM. Undoubtedly, performing several tasks with this device was one heck of an experience. With its powerful internals, launching apps, web browsing, and multitasking was a breeze. Its fingerprint scanner can store up to 5 fingerprints and so far, it’s been lightning-quick and responsive. 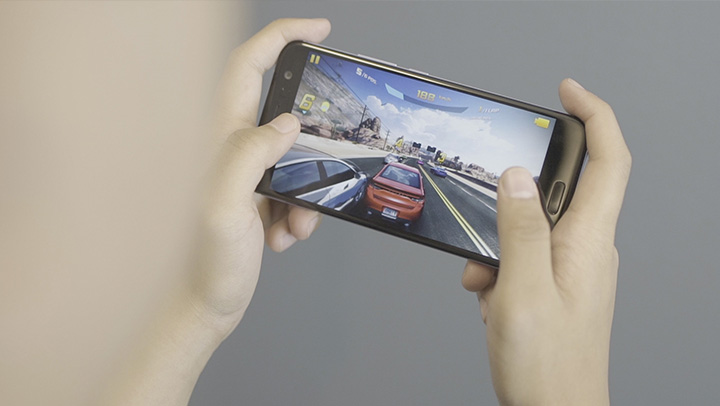 Gaming-wise, we were able to play graphically-heavy games such as Asphalt 8 and Injustice 2, clocked at the highest setting, with no fuss. However, the device gets pretty hot after hours of using it but it isn’t something to be alarmed of. Besides, you have the protective case to help you with that.

Of course, we shall not forget what sets the U11 apart from other devices: its Edge Sense feature or commonly known as the “Squeeze” feature. Trying it out for the first time can be quite a weird experience, but as you just keep using it, it can be fun. So far, launching apps on the said feature is pretty quick, although sometimes you might miss the spot. Take note that it might really take some time to get the hang of it and once you do, it comes in really handy. 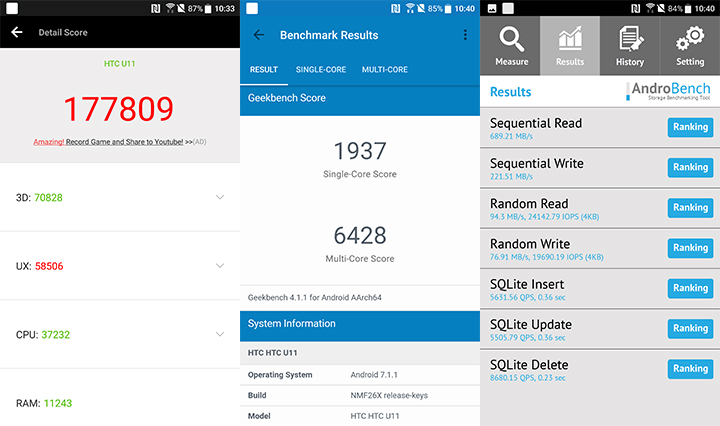 Moreover, here are the benchmarks scores we got: 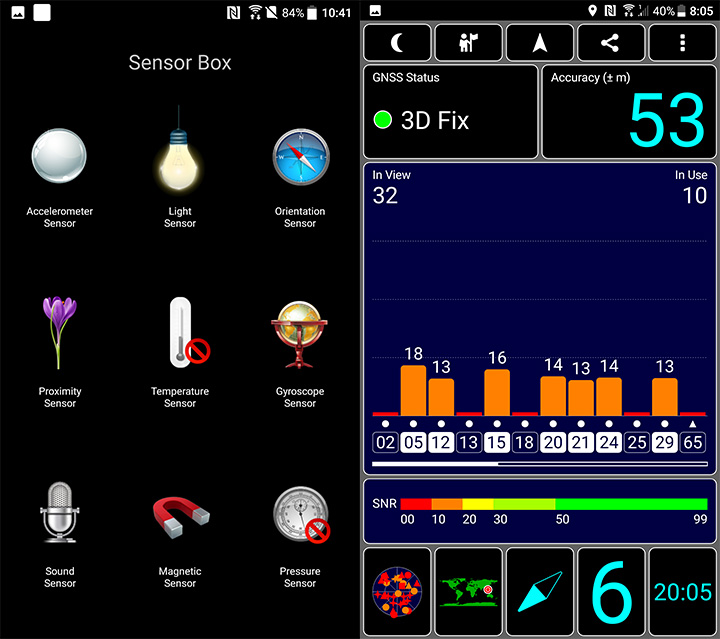 Call quality is clear, as long you’re in an area with good reception. We also didn’t go astray while using Google Maps, and Waze since the U11’s GPS works just as accurately and on-time. Connecting to the WiFi was a breeze. Using mobile data was also fast, but still, this depends on your whereabouts.

Despite all the great features of the HTC U11, it was a bit of a downer that it only offers 3000mAh battery capacity. But having done our usual video loop test, which involves playing a Full HD film in Airplane mode, 50% brightness, and 0% volume, the U11 was able to last for 14 hours and 56 minutes— pretty surprising given its battery capacity (hats off to the power efficiency of the Snapdragon 835). As for our PCMark battery test, we got 9 hours flat. From heavy social media browsing, picture/video shootings, and playing games, the U11 was able to last around 7 hours of continuous usage via WiFi. Using mobile data (4G LTE), on the other hand, got us 4-5 hours of continuous usage. So we suggest that you bring a power bank with you if you’re a heavy data user. Thanks to Qualcomm Quick Charge 3.0, charging the U11 only took us 1 hour and 50 minutes (from 0% – 100%).

HTC may have been away from the spotlight for a while but its great comeback with the U series of smartphones, particularly with the U11, didn’t disappoint. In fact, it’s that kind of smartphone that you will grow fond of as time goes by. With its 5.5-inch Quad HD display, 6GB RAM, 128GB ROM, and Snapdragon 835 chipset, multitasking on the U11 was a no-brainer. It doesn’t stop there. You’d also get to take good photos either in RAW or JPEG with its 12MP f/1.7 Dual Pixel rear camera, and get to take 4K videos up to 60fps.

So if you’re looking for a smartphone that rocks both on the look and internal department, this might work for you. 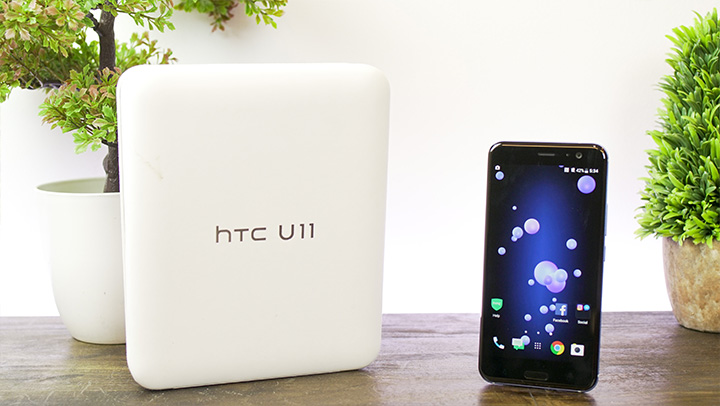