Huawei has decided to spice up its flagship P-series smartphones by adding a third member, the P40 Pro+. During its launch, Huawei hyped up the P40 Pro+ with its amazing cameras, especially the included periscope lens capable of up to 100x zoom. As such, we’re comparing the P40 Pro+ with the top of the line smartphone from Samsung’s S20-series, the S20 Ultra. 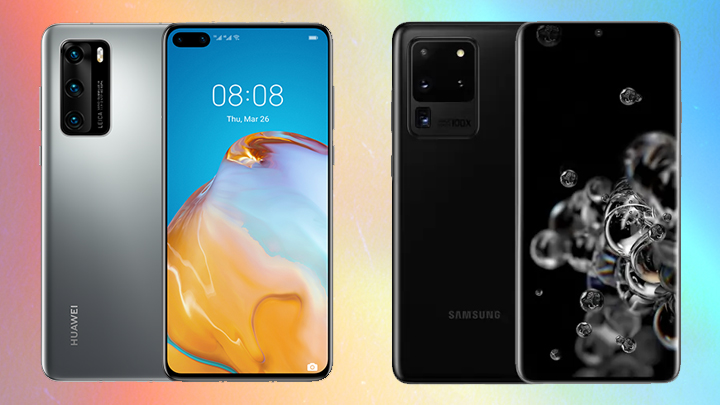 Starting with the display, the Samsung S20 Ultra trumps the P40 Pro+ with its massive 6.9-inch AMOLED screen. Users are also given a choice between a higher fidelity Quad HD+ resolution or buttery smooth animations with its 120Hz refresh rate when running at Full HD+ resolution. That being said, the P40 Pro+’ display is still excellent, measuring 6.58 inches with a Full HD+ OLED panel running at 90Hz.

Both flagship smartphones have amazing camera setups, with different strengths. The P40 Pro+ has a better 40MP ultra-wide and a dedicated 8MP Periscope, while the S20 Ultra has a whopping 108MP main and higher resolution 48MP telephoto camera. While the S20 Ultra may have a higher resolution 40MP front camera, the Huawei P40 Pro+ comes with an additional IR Depth/Gesture camera.

Connectivity-wise, both devices come with 5G NR, 4G LTE, WiFi 6, and GPS. They both also have NFC and dual SIM support. However, the P40 Pro+ does come with the newer Bluetooth 5.1. In terms of biometrics, both devices can be unlocked via the in-display fingerprint scanner and facial recognition, although the implementation is different.

Both devices are also IP 68 dust and water-resistant; however, the S20 Ultra is more protected thanks to its use of Corning Gorilla Glass 6 and built-in Knox Mobile Security.

These two devices are, without a doubt, top of the line smartphones. They both offer amazing displays with fast refresh rates, the best chipsets, amazing cameras, large batteries, and the best fast-charging technologies from that their companies have to offer. If you’re into camera versatility, then the P40 Pro+ might be the better choice with its seven cameras. However, if the display quality and GMS matter more to you, then the S20 Ultra would be the better choice.

Which of these two would you rather have? Let us know in the comments below!